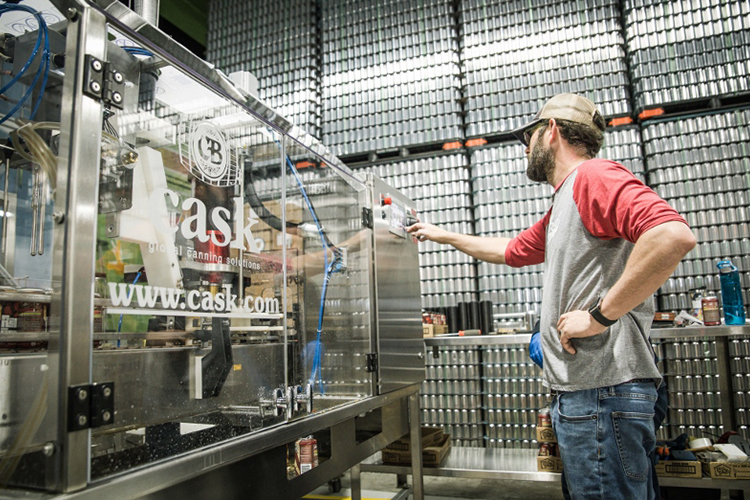 With most of the world in a shelter-in-place mode, Cask Global Canning Solutions is deputizing longtime customers around the globe to conduct canning system installations.  Cask has recently enlisted Olof Haggstrom, founder of Sweden’s pioneering Can Man mobile canning service, to install three new Cask systems in Sweden.

Chas Love, Technical Representative and a third-generation member of the family owned Cask, coordinated the effort with Haggstrom. “We want to make sure,” Love says, “that we’re doing everything possible now to help our new customers get their beer into cans and join the Cask family.”

“Due to the coronavirus situation and international travel restrictions,” Haggstrom says, “Cask was unable to get its staff here. So my doing the installs solved the problem.”

Haggstrom is immensely qualified for the task: he uses six different Cask canning systems for his five-year-old mobile canning service. He tackled Cask installations at three Swedish breweries (Bryggeriet i Umeå, Poppels and Fermenterarna), where he set up a Semi-Automatic Canning System, a Micro-Automated Canning System and a Cask Automated Depalletizer.

The breweries were mobile canning clients of Can Man that moved up to their own Cask systems in order to boost production and sales.

Haggstrom’s installation efforts, says Fermenterarna’s Niclas Aronsson, made for a successful launch. “We canned 500L with him during the installation,” Aaronsson says, “and a few days later myself and my partner did 4000L on our own with no problems.”

Haggstrom’s experience and longstanding relationships with these breweries also made for a helpful level of trust during the installations.  “I was glad to help these breweries and glad to help Cask, too,” Haggstrom says, “since the company has been so helpful to me in my Can Man efforts here.”

“Olof has been a monumental ally for us in Sweden for years,” Love says. “He’s a giant advocate there for canned craft beer and our company, and he really understands our equipment.”

“There has never been a more important time,” Love adds, “for a craft brewery to have packaged beer. And cans are the best beer package there is and they’ve become a lifeline for breweries around the world to stay afloat during the COVID-19 crisis.”

This year Cask, the inventors of micro-canning for craft brewers, is celebrating 20 years of its pioneering canning systems and their revolutionizing of craft beverage packaging around the world.

Cask Global Canning Solutions — the inventors of micro-canning — presented its first rule-breaking canning system for breweries at the 2002 Craft Brewers Conference in Cleveland, Ohio. But before that historic move, Cask smashed the bottles-only practices of the original small-batch beer makers: homebrewers.

Since the early 1980s, Cask had been providing brewing systems for the then-popular “brew on premise” establishments that Cask equipped in North America, the UK and Australia. “One BOP customer,” Cask founder Peter Love recalls, “asked if we could figure out how to put beer into aluminum cans. That’s what got us started in the canning business.”

In 1999, Cask produced a novel table-top canning system for these BOPs and witnessed a revelation. “The homebrewers preferred cans over bottles,” Love remembers. “They were lightweight, didn’t break, chilled quickly and were super portable. When the beer was gone the brewers recycled their cans and got new cans for the next batch. They loved it.”

That discovery led Cask to make the status-quo-defying move of championing the maligned aluminum can as the ultimate craft beer package. But brewers at the 2002 CBC were perplexed by Cask’s revolutionary idea and its unique canning system that filled two cans at a time.

“Several brewers,” Cask founder Peter Love remembers, “‘told us, ‘That is the dumbest idea I have ever seen. No craft beer drinker’s going to buy beer in cans.’ Other brewers were steadfast about bottles being the only package for craft beer. But we knew there was a better option and felt brewers and consumers would agree if given full-flavored beer in a can.”

Love’s hunch was correct. In 2002, Cask’s first brewery customer, tiny Oskar Blues Brewery & Pub in Lyons, Colorado, used Cask’s canning gear to become the first U.S. craft brewer to brew and can its own beer. Its assertive beers and cans-only focus made it a fast-growing success story. More craft brewers slowly began forsaking bottles for cans and their environmental, portability and freshness-keeping powers.

Today nearly 50% of packaged craft beer in the U.S. is in cans and U.S. canned craft beer sales annually rise faster than bottles. The micro-canning movement Cask created has now spread around the world. Cask has placed over 1600 of its systems in over 70 countries, and brewers and beer lovers increasingly consider cans their preferred beer package.

Love is now known as the Steve Jobs of micro-canning, the man who put the can in craft beer. His son, Russell Love, is now the president of the fourth-generation, family owned company, which employs two more Love siblings and nearly 70 staffers in North America and Europe.

“We want to do around the world what we did for canned craft beer in North America,” Russell says. “Cans provide complete protection from light and oxygen, they’re highly portable and infinitely recyclable, and they enable brewers to dramatically shrink their fuel and packaging use. Our machines make it easy for breweries to take advantage of those giant benefits.”