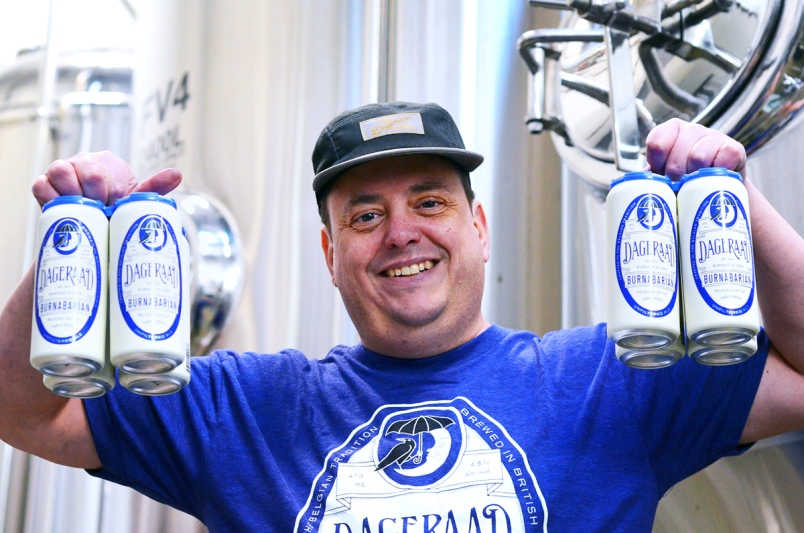 Burnaby’s own: Dageraad Brewing founder Ben Coli shows off the brewery’s latest product – Dageraad’s Burnabarian four-pack. Coli hopes the pack will become the beer of Burnaby. It’s currently available in Burnaby at the government liquor store at Northgate on North Road, the clubhouses at Riverway and Burnaby Mountain golf courses and the brewery on Thunderbird Crescent. Outside of Burnaby, the four-packs are for sale at 33 liquor stores in Vancouver, New Westminster and the Tri-Cities.
Photograph By CORNELIA NAYLOR

April showers may delay the start of patio season, but Dageraad Brewing hopes that won’t stop folks from picking up a four-pack of Burnabarian.

The four-packs are a new thing for the Burnaby-based brewery. They started canning them about one month ago in hopes of cracking into a new market, according to Dageraad founder Ben Coli.

“It’s a little more accessible beer than a lot of the stuff we make because it’s 4.5 per cent alcohol; it’s just really light and delicious and really drinkable, and now we have it in a bit easier package than our big bottles,” he said of the new Burnabarian four-packs.

“It’s an everyday-drinking-beer sort of format. So we’re really excited about that.”

The Burnabarian, along with the Blonde, was one of the first beers Dageraad released when it opened in 2014. It’s a beer named after Burnaby, for the people of Burnaby, Coli said.

“I’m hoping to get this in front of more people in Burnaby.”

A month in, though, and sales could be better, Coli admits.

“I would like them to be better. It’s harder to get them into the stores often. Stores tend to have fewer slots for six packs, and they have higher expectations on how many of those six-packs are going to sell,” he said, adding the same philosophy goes for four-packs of tall cans.