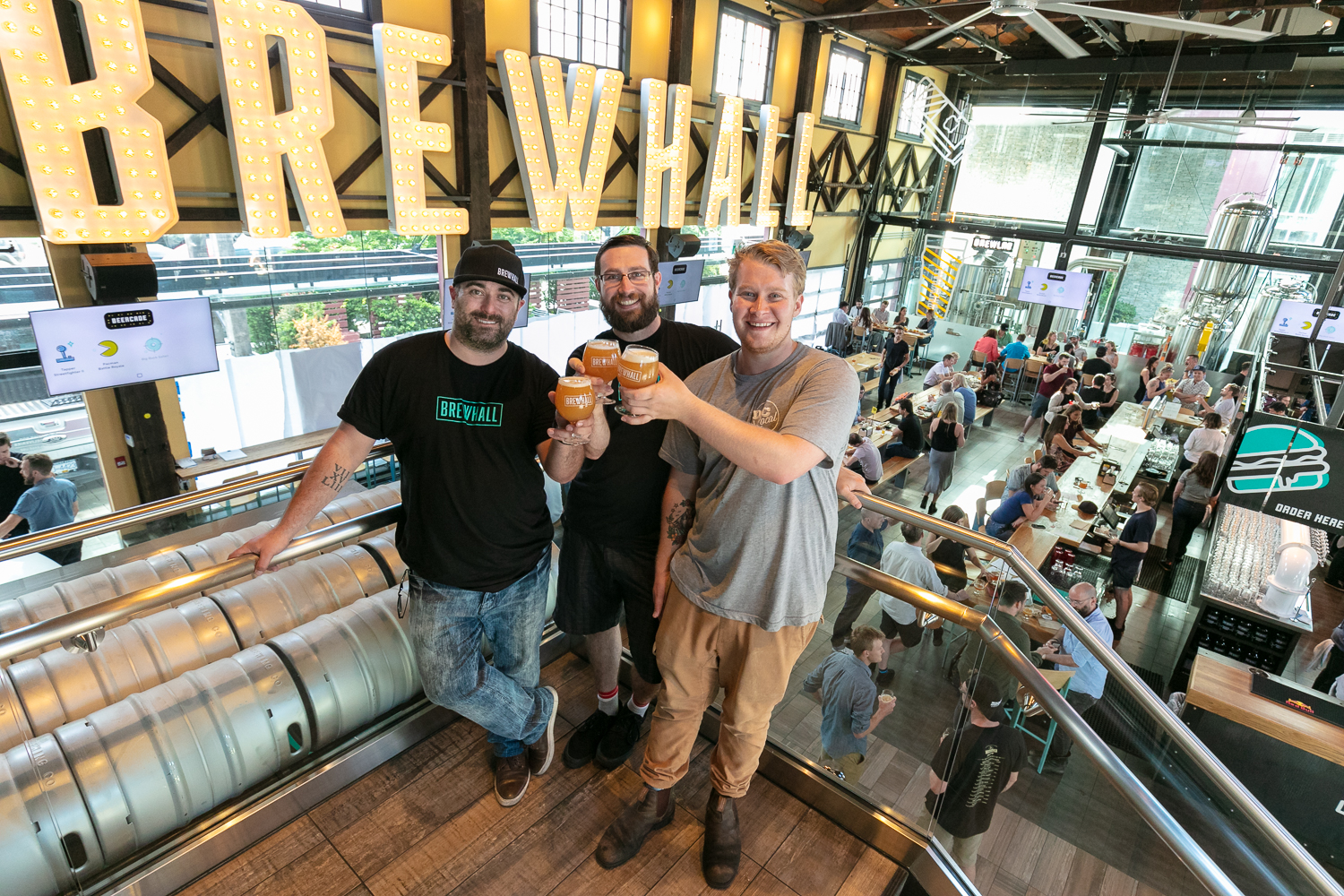 December 6, 2018 (Vancouver, BC) – October 24th marked a special day for BREWHALL Beer Co. In addition to brewing its twentieth craft beer collaboration, it was the first time BREWHALL collaborated with a brewery outside of Canada – Rogue Ales & Spirits from Oregon. It was also the first time Rogue had brewed a collaboration with a Canadian brewery.

“One of the things that excites me the most about doing this Rogue collaboration is that we are a relatively young industry,” says Daniel Frankel, BREWHALL’s Founder & CEO. “In Portland, craft beer has been around a lot longer and we have so much to learn from Rogue and from our partners south of the border. We’re excited to see how we can stretch ourselves, how we can grow, and how we can explore and connect with new friends.”

Rogue, founded in Oregon in 1988 as one of America’s first microbreweries, is the only farmer-brewer-distiller-cooper in the United States. Rogue’s Innovation Brewer, Danny Connors, along with a small team from the brewery, travelled to Vancouver and spent the day brewing a Double IPA with BREWHALL. The beer was named Hazy Borders to represent the style as well as the power of ‘breaking down the borders of the north and south’ to bring people together and build connections.

Hazy Borders is a northeast style IPA that was double dry-hopped with Sabro, Bru-1 and Topaz hops, giving it a massive aroma of pineapple, coconut and mango. This juicy aroma is backed by a full-bodied malt profile. The beer comes in at 8% ABV and 60 IBU. The beer launches on Thursday, December 6th and will be available at BREWHALL until it runs out so gather your friends and come try Hazy Borders together! Watch the brew day video.

About Rogue Ales & Spirits
Rogue Ales & Spirits has won more than 1,900 awards for taste, quality and packaging, and is available in all 50 states as well as 54 countries. Proudly rooted in Oregon soil, Rogue’s beers, spirits and sodas are made with ingredients grown on Rogue Farms in the Tygh Valley and in Independence, Oregon. Rogue Spirits are hand-distilled on a 550-gallon still in Newport, Oregon, aged in the thick ocean air of the Yaquina Bay and bottled by hand. Since 2008, Rogue has remained committed to sharing the terroir of Oregon hops, barley, rye, wheat, honey, cucumbers and pumpkins one acre at a time by growing its own.

BREWHALL is Vancouver’s first collaboration brewery and large format beerhall concept. Since opening in July 2018, the brewery has brewed over 30 collaborations with some of the provinces most celebrated local breweries. In October, BREWHALL Beer Co. won the People’s Choice Award at the BC Beer Awards for its ‘Mighty Morphin Sour Rangers’ beer and continues to collaborate and experiment with the lead of Head Brewer, Kerry Dyson.