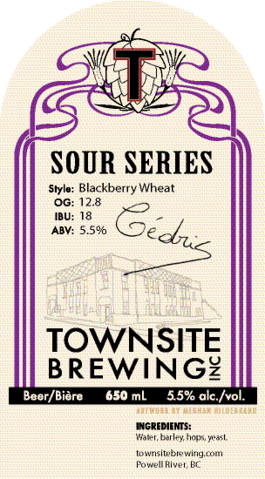 Powell River, B.C. – Fall 2017 – Recently named Canada’s best in the category of American Sour, this red hued beauty is back.

‘This is a big win for us’ says G.M. Chloe Smith ‘Sour beers are really heating up in the craft beer industry these days, so to take home the #1 spot is pretty exciting’

This is the sour version of the always popular Blackberry FestivALE, which Townsite brews for the annual blackberry festival that is held in Powell River the third weekend of August. It has a wheat beer base, which is soured, then has blackberry puree added to it. Another well balanced ale from Brewmaster, Cédric Dauchot’s repertoire.