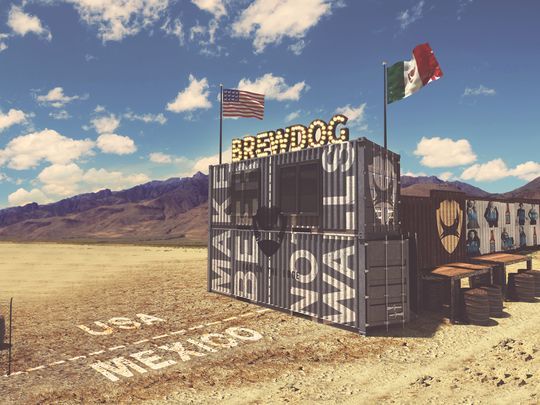 Scottish brewery BrewDog said it intends to build a bar made of shipping containers on the U.S.-Mexican border in Texas. (Photo: BrewDog)

By Garrett Mitchell for azcentral.com

A Scottish craft brewer intends to promote collaboration and inclusivity with a bar that straddles a remote portion of the border between the United States and Mexico.

The plan? Improve international relations and foster some frothy friendliness by constructing a cross-border bar on the southern edge of Texas, BrewDog brewery announced last week.

It’s the latest endeavor from the Scottish brewery, which intends to expand to the “farthest reaches” of the United States after opening almost 50 bars across the globe. The company made headlines in February for offering “paw-ternity” leave for employees.

It’s a physical statement for the beer brand after the U.S. House of Representatives voted to allocate $1.6 billion to fund construction of President Donald Trump’s controversial wall along about 70 miles of the 2,000-mile dividing line.