On with the beer tap, off with the oil tap: B.C. microbreweries against Kinder Morgan 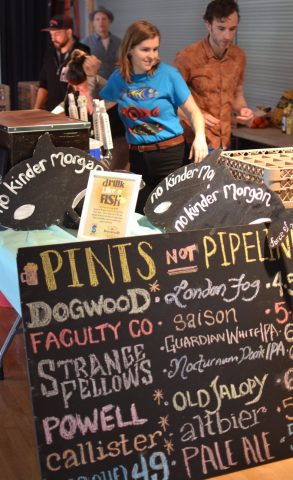 By Erin Ellis for the National Observer

Five local micro-breweries donated beer for a weekend charity event in Vancouver that brought in $17,000 to fund lawsuits against the proposed expansion of Kinder Morgan’s 1,150-kilometre Trans Mountain pipeline between Alberta and the Vancouver region.

It follows a similar campaign by 21 craft beer makers in Quebec against TransCanada Corp. proposed Energy East plan for a 4,500-kilometre pipeline from the Prairies through Quebec to New Brunswick.

Claire Wilson, brewmaster at Dogwood Brewery in Vancouver, says her organic beer and zero-waste packaging are part of a larger commitment to a clean environment.

“It makes sense for us to support a group that wants to protect our rivers and watersheds and the environmental stability of province,” says Wilson about Pull Together, the event’s organizers. “It’s something that craft brewers think about constantly because 95 per cent of the product that we make is water.”