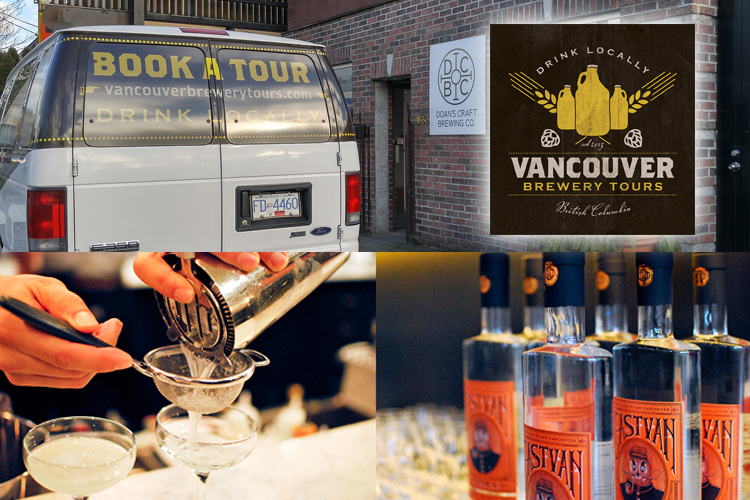 Vancouver, BC (Nov. 15th, 2017) – Gin or IPA? How about both! While Vancouver’s vibrant craft beer community continues to grow, there is another industry quietly shaking things up around town – craft distilling – and Vancouver Brewery Tours would like to introduce you to their newest tour.

Barrels and Behind the Scenes is a 3 hour distillery and brewery tour that showcases the best of Vancouver’s burgeoning craft spirits and beer communities. Visiting Odd Society Spirits, Powell Brewery and Deep Cove Brewers and Distillers, each Thursday guests will learn about the distillation and brewing processes and about the role of barrel ageing and how it influences and adds flavours to both beer and spirits.

Guests will sample raw spirits and a cocktail at Odd Society Spirits before moving on to Powell Brewery to visit the “barrel room” and learn about the company’s extensive barrel ageing program. For the final stop of the tour guests will cross the bridge into the fresh air of North Vancouver to visit Deep Cove Brewers and Distillers – one of the only companies in BC that produces both beers and spirits.

Each tour includes full transportation including pick up and drop off from Waterfront Station, VIP behind the scenes tours, all samples and even a free Vancouver Brewery Tours 16oz beer glass at the end of each tour.

Tickets are available for purchase for $89.99 plus tax per person at www.vancouverbrewerytours.com or by phone at 604-318-2280.

ABOUT VANCOUVER BREWERY TOURS | Founded in 2013 by local craft beer enthusiast Ryan Mackey, Vancouver Brewery Tours connects both residents and visitors alike to Vancouver’s burgeoning craft beer community via daily Public Tours and completely customizable Private and Corporate Group Tours. While on tour, guests ride comfortably in Vancouver Brewery Tours’ fleet of vans and enjoy VIP, behind-the-scenes access to a host of local breweries as well as samples of iconic local craft brews as a team of friendly and knowledgeable tour guides take them through the brewing process from grain to glass.