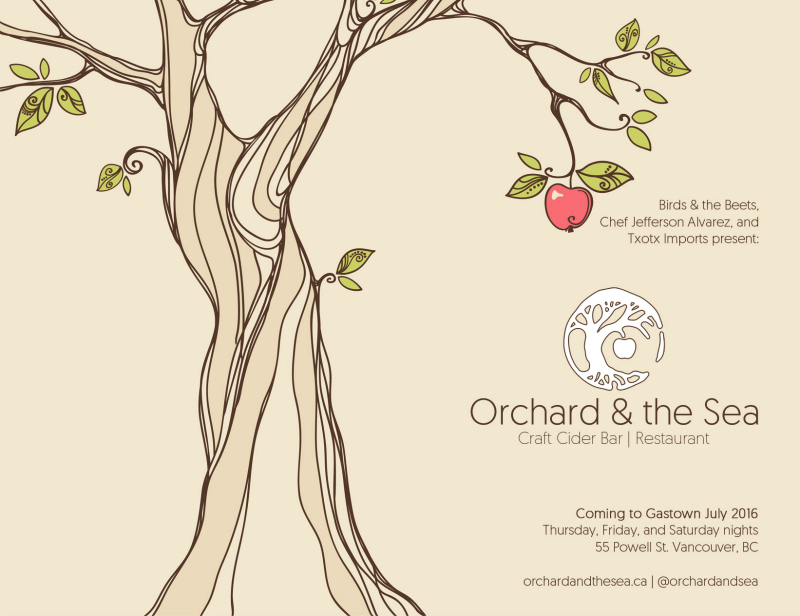 VANCOUVER, July 2016 | Press Release |­ Cider’s popularity is on the rise, and shows no sign of slowing down anytime soon. The province has seen huge increases in availability of both locally­ made and imported ciders, but the cider selection on most menus is rarely more than one or two craft products…until now.

With curated rotating selections ranging from dry to sweet, and from draft to limited­ edition ciders from local and imported producers, ORCHARD & THE SEA will have it all. Cider won’t be the only star on the menu, either: critically­ acclaimed (The Globe and Mail, Scout Magazine, The Georgia Strait, multiple Michelin­ starred restaurants) chef Jefferson Alvarez will have full control of the food offerings. Jefferson says, “I want the menu to be rustic, playful, and unique to Vancouver.”

“We want to build awareness about how complex cider can be,” says Txotx Imports co­ owner Shawn Pisio.

Committed to providing the best ciders from local, national, and international producers, paired with expertly hand­crafted small plates, ORCHARD & THE SEA will serve up quality products both in your glass, and on your plate.

It’s all about the apple.