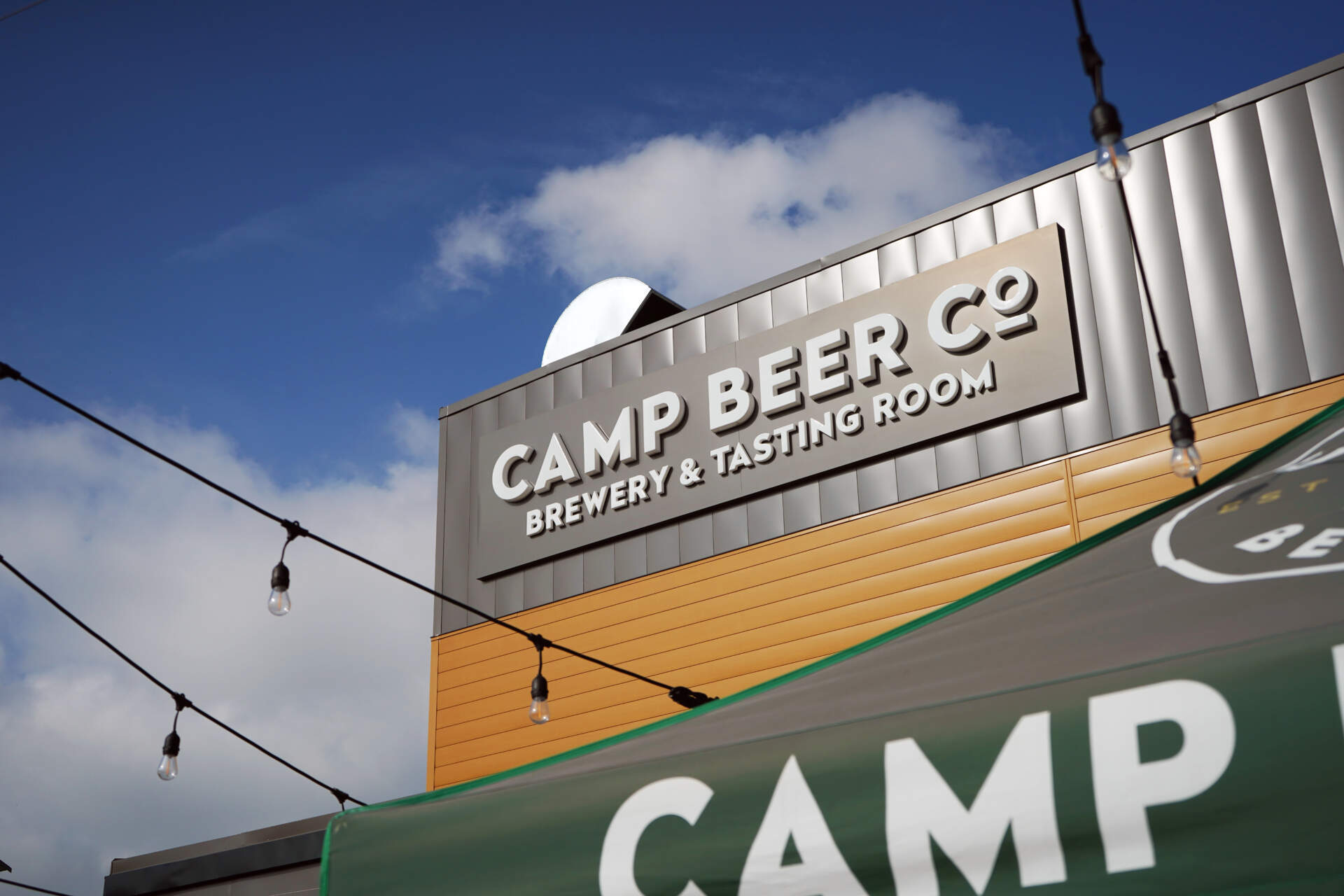 VANCOUVER, BC (October 19, 2022): In the same way voters cast their ballots in municipal elections around BC this past weekend, craft beer lovers from around the province exercised their franchise to lift Langley’s Camp Beer Co. to the BC Ale Trail’s 2022 Best Brewery Experience Award. It marks the first time a Fraser Valley brewery has earned the accolade.

The award gives the people who buy BC beer the opportunity to single out breweries that work hard to create unique and unforgettable consumer experiences, from the quality of beer and food served to the lively atmosphere and welcoming spaces found within tasting rooms and on patios.

Since it opened three years ago, Camp Beer Co. has established itself as a go-to destination for locals and craft beer tourists alike. Credit the expansive, pet-friendly patio with fire pits and live music on the ‘Campitheatre’; the Canadiana-themed décor scheme of the lodge-like tap room that runs the gamut from Camp to Camp-y; a core beer lineup that includes Camp Lager, Upstream Pale Ale and Anorak IPA; and nostalgic, camping-inspired fare like Smokies, Spuds and S’Mores on offer from the Camp Cookhouse.

Co-owner Kevin Larsen and Head Brewer Dave Henry first met at the Full Barrel Homebrew Club. Over many beers and cask nights at fellow Langley beer pioneer Trading Post Brewing, they decided to set up their own Camp in a former bingo hall in the heart of Langley.

“We always had to go to Vancouver or Bellingham to go to all the cool places like Brassneck or Wander Brewing,” says Larsen. “We’re Langley guys and we wanted something here that beer tourists, friends and beer club members could all come to that was local. We’re proud we did something we wanted, and that a lot of other people like it, too.”

Less than four months after opening its doors in December of 2019, COVID-19 restrictions and closures put a major damper on the new operation. After a deep breath and one of those ‘pandemic pivots’ that quickly became part of the vernacular across all industries, the Camp crew refocused their efforts on canning, curbside pickup, and local delivery. Thirsty Langley folk were all too happy to snap up those cans, support local and throw the brewery the lifeline it desperately needed to weather the storm.

“Camp is a real example of the old maxim that the whole is greater than the sum of its parts,” says BC Ale Trail Project Lead Monica Frost. “From the pet-friendly patio and the creatively themed aspects of the brewery like the Cabin, Woods, and Camp Outfitters to the quality of beer they brew, they’ve established themselves as a true craft brewing destination, and fans around the province continue to spread the gospel and show their love.”

It’s not the first time the Camp crew has been singled out for excellence. The team also grabbed the 2022 ‘Growlie’ Gold Medal for Best Brewery Tasting Room as part of The Growler BC’s annual slate of brewing awards, improving on the silver they scored the year prior.

Camp is one of nine brewery operations on the new Langley Ale Trail — an area that began building its bona fides as a BC beer stronghold when Dead Frog Brewery set up shop in Aldergrove (originally as Backwoods Brewing) in 1998. Since then, Trading Post, Farm Country Brewing, Five Roads Brewing and more have helped cultivate its reputation as a true hub for craft beer connoisseurs.

The 2022 edition of the Best Brewery Experience Award invited BC beer lovers to vote on their favourite brewery throughout the summer, with British Columbian beer aficionados casting more than 4,500 votes for craft breweries across the province.

“Each year, we continue to see a groundswell of voters casting ballots for their favourite breweries on the BC Ale Trail and we’re thrilled this award has become an annual highlight on the BC craft beer calendar,” says Frost. “It’s a true testament to the amazing community of brewers we have here in BC and the many beer lovers out there who love what they do.”

To learn more about Camp Beer Co., check out the BC Ale Trail Blog or watch as BC Ale Trail Content Manager Joe Wiebe welcomes Henry and Larsen as his special guests on the next edition of the Virtual Hoppy Hour on @bcaletrail’s Instagram account on Thursday, October 27 at 6 p.m. Folks can also also participate in the Langley Ale Trail Tasting Passport campaign running until October 30. Fill your passport for a chance to win the Grand Prize weekend getaway.

To get out and explore BC’s best craft breweries, visit the BC Ale Trail website today, and download the app to collect reward points at all the breweries visited and redeem them for prizes and discounts.