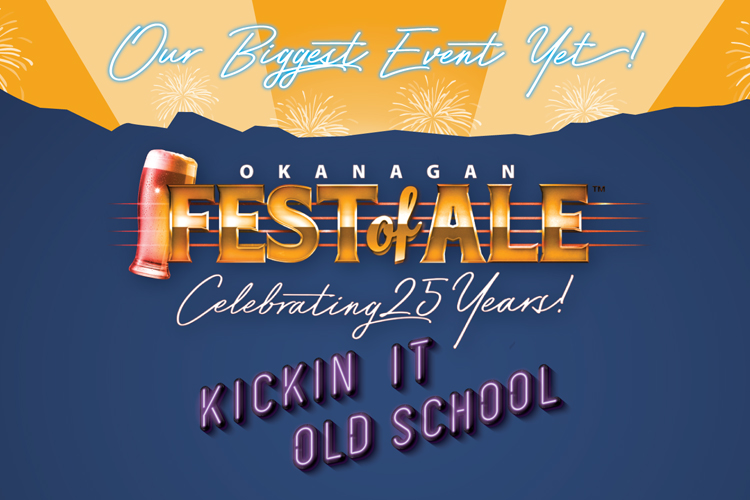 This year, there will be over 25% more breweries and cideries than last year with 90 beverage vendors at the biggest beer festival the Okanagan has ever seen. “This is another record-breaking number of participants for us” says John Cruickshank, Okanagan Fest of Ale Society President.  “Of the participating breweries, many will be offering new seasonal releases, collaborations and beers created especially for the festival.  The group is a nicely balanced mix of returning favourites, new, and soon to be up and running breweries from neighborhoods across the province and we can’t wait to welcome them to the Okanagan in April”.

Guests of the fest can also look forward to fabulous food, with many restaurateurs incorporating a craft inspired twist on their dish, fun photo booths, onsite pop-up shops and entertainment and great live music in both the SOEC and the PTCC. The Best Team Costume Contest is back and will run over both days with the friendly folks from SUN FM/EZ Rock onsite and camera ready. So, dust off your best 90’s gear and join the Fest of Ale for prizes and bragging rights.

Penticton has always been a major player in the craft beer scene and has recently been dubbed Canada’s Craft Beer Capital from the Lonely Planet. “Our city has more craft breweries per capita than any other city in Canada and we are thrilled to be a part of this community! The Okanagan Fest of Ale is an integral part of the brew culture in the Okanagan, bringing more brewers and beer lovers from all over the province to our beautiful city”!

25 Years of Giving Back, Drink Beer – Do Good!
Operating as a non-profit society, The Okanagan Fest of Ale donates all net proceeds of the event back into the community. To date, the Fest of Ale has given $757,600 to local charities and Not-for-Profit societies operating in the South Okanagan.

Buy Your Tickets Now!
“Interest in this year’s event has been phenomenal so far with early ticket sales up 30% over this time last year”, said Cruickshank. “Hotels are also reporting a significant increase in package sales; if you are planning to join us we encourage you to buy your tickets soon and not miss your chance to Sip, Savour and Celebrate the best in BC craft beer and cider at the 2020 Okanagan Fest of Ale!”

Tickets to the event are available online at https://festofale.ca/
In person at the Valley First Box Office at the SOEC
Ticket & Accommodation Specials can be found at https://festofale.ca/tickets/ticket-accomodation-packages/
Regular Single Day Admission $29; 2-day Weekend Pass $49 (inclusive of tax and fees)
*Full event details will be posted on our website mid- February; Participating Brewers Listing Posted Feb 1