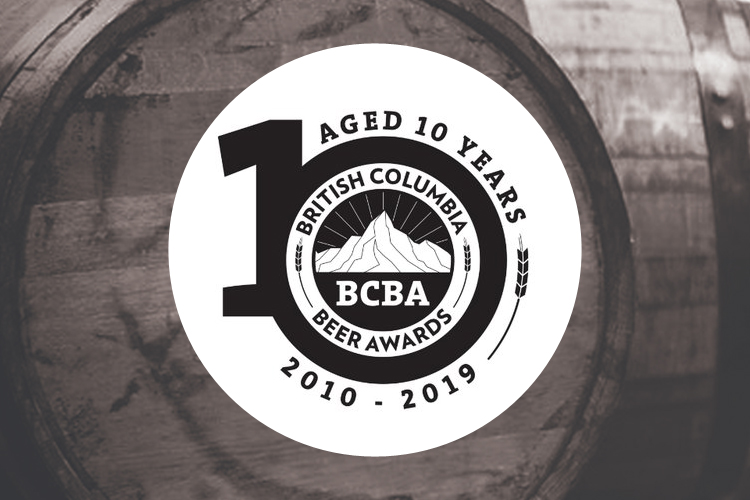 The 10th annual BC Beer Awards and Festival (BCBA) is set to return on October 19, 2019, to the Croatian Cultural Centre in Vancouver.

The signature consumer tasting event of BC Craft Beer Month, this festival celebrates the very best in craft brewing from across the province. This one-day event features both the BC Beer Awards Ceremony and a beer festival showcasing 45 of British Columbia’s best breweries.

Awards will be presented for 30+ beer categories plus top awards including Best in Show, People’s Choice, Rookie of the Year, Brewery of the Year, Innovator of the Year, and Brewer’s Challenge. Last year the BC Beer Awards challenged brewers to keep things fresh by brewing their best fresh-hop beer. This year as BCBA has ‘Aged 10 Years’, we thought it was appropriate to challenge brewers to age their beer as well and were notified well in advance to stash their special brew away. Returning for the third year, the Creative Industry Awards recognize breweries for crafting unique items and experiences that enhance the craft beer lovers’ brand awareness.

Returning to the festival will be our community booths, food trucks and event sponsors! Once the awards ceremony is over, guests will enjoy live music. We’ll also have a selection of BC Ciders presented by The BC Farmed Craft Cider Association!

Tokens: Additional tokens are $2 each per sample. There is an ATM on site.
On September 1st, the GA early bird tickets increase to $50 (plus taxes and fees) however, for the last several years we have SOLD OUT before that day.*

TICKETS ARE ON SALE HERE

BREWHALL and Great Little Box Company are excited to bring The Rec Room to the 2019 BC Beer Awards! Join us in the side room for life-sized interactive games, music, food and prizes. That’s not all – we’ll have a special 10 year anniversary photo booth set up for all your Instagram photo ops. While you’re there, don’t forget to vote for the CBC People’s Choice Award and you’ll find the coat check here as well. Proceeds going to support A Loving Spoonful. A Loving Spoonful provides free nutritious meals and nutritional counselling to men, women and children affected by HIV/AIDS in the community.

You asked and we listened… Our food sponsor Tap & Barrel will be serving up a BUILD YOUR OWN TACO BAR at this year’s BC Beer Awards. Enjoy chicken, pork, or vegetarian tacos and dress them up however you’d like with the classics, pickled vegetables and an assortment of sauces. More details to come!

Be sure to check out the Branded Brewers booth in The Rec Room where you can purchase official BC Beer Awards merchandise. Actually, why not order in advance and pick it up at the festival? Check out our Raglan Crew Neck for $49 – you too can have BCBA swag. Check it out!