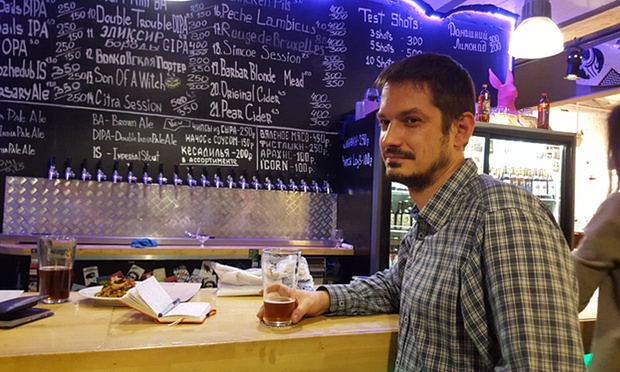 From Moscow and St Petersburg to the regions, a new generation of beer geeks is brewing a challenge to vodka-loving Russia’s deadly drinking culture

It is a drizzly Monday night, but Craft rePUBlic is boisterous with the chatter of brewers and beer aficionados. Those just walking in are greeted with a half pint of Red Nelson, a saison beer made with hibiscus tea and orange peel by local brewer Alexei Sazonov, who is celebrating his birthday at the craft beer bar.

Sazonov works at Bottle Share, one of a growing number of microbreweries driving what has been dubbed the “craft revolution” here, but he created Red Nelson at home under his nickname, Big Hedgehog. Sazonov says of the major Russian beer brands, whose bland lagers dominate store shelves and taps: “They boil it quickly, ferment it quickly and sell it quickly. A microbrewer brews beer he wants to drink himself.”

Russia, of course, is known for vodka rather than beer, and a popular saying holds that “beer without vodka is throwing money to the wind”. According to the latest World Health Organisation data from 2010, 51% of alcohol consumed in Russia was spirits and only 38% was beer. This vodka culture has had deadly consequences for Russian men, whose average life expectancy of just 64 years lags behind that in European countries due mainly to heavy drinking and tobacco use.

Now a new generation of “beer geeks”, as they dub themselves, is working to change Russians’ approach to beer – and to drinking in general. With a focus on savouring the taste rather than drinking to get drunk, at least two dozen craft bars have opened in Moscow since the summer of 2014, serving Russian and foreign microbrews. They’re getting so numerous that the cultural magazine Afisha declared in August that it was “refusing to write reviews of the craft beer bars that are opening every week”.

Filed under: Beer In The News, Business of Beer, Travel & Beer Tourism