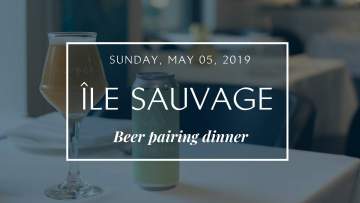 It looks like this week is a big anniversary week with Electric Bicycle celebrating their first and VIB and Old Yale celebrating two massive milestones. Isn’t it weird how so many breweries open around the same time? #conspiracytheory

Tonight, Victoria’s own Vancouver Island Brewing is celebrating their 35th anniversary with a 1984-themed party. The event will include appetizers, brewery tours, beer, and a commemorative glass to remember the day by.

Then on Saturday, Old Yale Brewing in Chilliwack is celebrating their 20th anniversary with throwback favourite beers, live music on the stage all day, food trucks, outdoor games and more!

Also on Saturday, Electric Bicycle Brewing in Vancouver is celebrating their 1st anniversary with super special beer releases, live painting, a BBQ, and a live DJ set all day and into the night.

On Sunday, the Courtney Room in Victoria is hosting a special Île Sauvage beer pairing dinner top celebrate their first anniversary. I’ve seen the menu and beer list and it looks phenomenal!

If you want to learn more about beer, on Sunday Craft Beer Market is hosting a Beersavvy Boot Camp where you can prepare for the Certified Beer Server exam with a fun, interactive class put on by the Cicerone Certification Program

Next Thursday, get your fill at Dead Frog’s Spring Brewmaster Dinner. The menu features fresh spring fare paired with some of their spring brews.