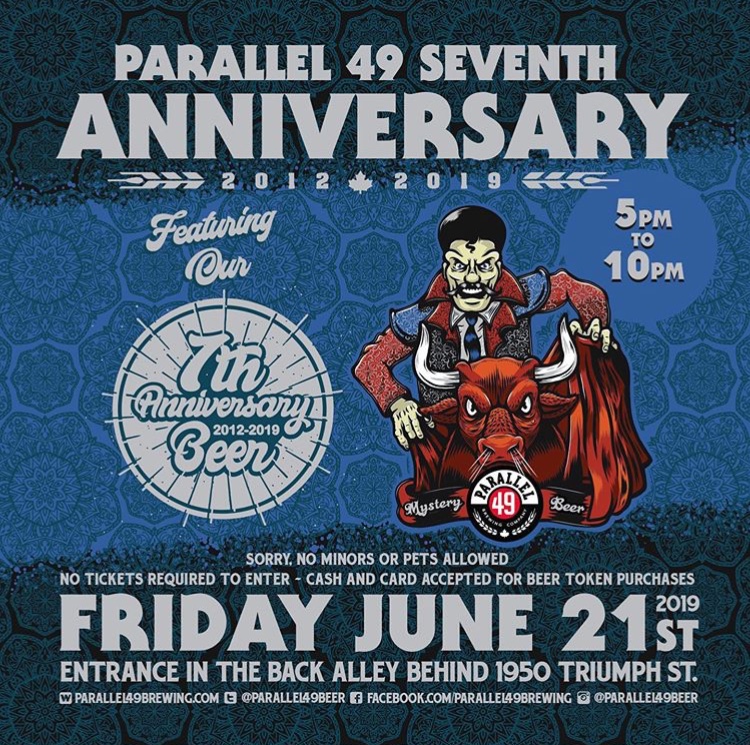 Can you believe it’s Parallel 49’s 7th anniversary this week? They’ve become so big in such a short time! Get out and raise a glass in their honour this weekend!

Tonight, head over to Callister Brewing in East Vancouver to welcome Altitude Beer Co. to the Callister family. The first beer they will be pouring is a delicious pale ale with some special hops from New Zealand. They will only have around 30 L of this pilot batch on, so don’t miss out.

In Victoria, head to Vessel Liquor tonight for a summer beer seminar hosted by Joe Wiebe, where he will guide you through tastings of his top beer picks for the summer season.

On Friday, Parallel 49 Brewing in East Vancouver is holding their 7th anniversary party. They’ll have an outdoor beer garden, food trucks, a special anniversary beer release, a selection of $5 beers on offer, plus a DJ.

On Saturday, Big Ridge Brewing in Surrey is holding a cask off to celebrate their 20th anniversary, where there will be nine unique casks from local BC breweries going head-to-head.

At the same time, Trading Post is holding a grand opening party for their new Abbotsford Eatery. They’ll have beer & wine tastings, charcuterie, a pig roast, live music, activities, and much more.

Next Wednesday, Biercraft on Commercial Drive is a holding a tap takeover featuring six beers from the 2019 Red Racer “Across the Nation” collaboration pack. The list looks to have some interesting collaborations with some quite well regarded breweries from across Canada.