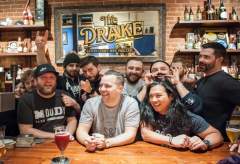 Love is in the air this week, but we also have a couple of brewery anniversaries coming up. Coincidence? Hmm…

Tonight, The Drake in Victoria is showing some love to the 6 breweries that supported them during their early days, with all taps dedicated to Dageraad, Four Winds, Steel & Oak, Moody Ales, Powell, and Brassneck.

If you are looking for a romantic Valentine’s activity, Luppolo Brewing is holding a beer and chocolate night with a guided pairing of 5 beers and chocolates.

Also tonight, Monkey 9 Brewing in Richmond is celebrating their 1st anniversary with a ticketed event featuring all inclusive bites and beers.

Looking ahead, Saturday the 23rd brings Hopwired Festival, Canada’s first and only specialty coffee and craft beer festival. As a lover of coffee beers, I’m very excited about this one! Heads up: only 3% of tickets remain, so don’t sleep on it.