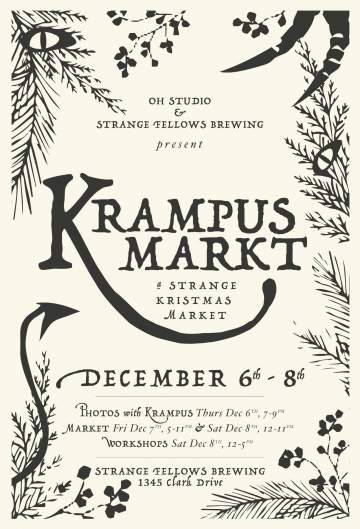 The weather may be getting cold out, but we’ve got plenty of beer events worth leaving your house for this week! For a look ahead at this season’s top events, check out our holiday event calendar.

Starting tonight and running through Sunday, Strange Fellows Brewing will be hosting their annual Krampusmarkt, where you can get your photo taken with Krampus, visit the Strange Kristmas Market, or attend an artist-led workshop.

On Friday night, Handlebar Cafe in Whistler will host a tap takeover by Powell River’s Townsite Brewing, with six of their mostly Belgian-inspired beers on tap.

On Saturday, 328 Taphouse in Langford will host a Fuggles & Warlock tap takeover, showcasing five of their beers and a special cask.

I guess late-fall is a popular time to open a brewery, because there are four anniversary parties for BC breweries taking place on Saturday!

First up, Category 12 in Victoria is hosting a ticketed 4th anniversary celebration, with a cask, two barrel-aged releases, rare beers, bites, a DJ, and more!

Up in Squamish, A-frame is celebrating their second anniversary, with an anniversary sour release, gingerbread cabin decorating, and a live band.

Over in East Vancouver, East Van Brewing is celebrating their 1st anniversary with a barrel-aged imperial stout release, live music, and a food truck.

Down in Sooke, Bad Dog brewing is also celebrating their 1st anniversary with their Dog’s Breakfast anniversary beer release and complimentary breakfasts all day long (by donation)!