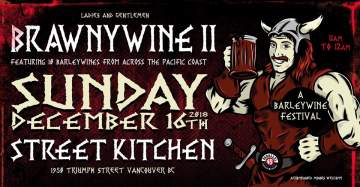 Need a break from holiday shopping? These craft beer events will make gift buying go much more smoothly! For more of this season’s top events, check out our holiday event calendar.

Tonight, Kask in Prince George is hosting a massive Beerthirst tap takeover, with 24 beers from Alesmith, Against the Grain, Moylans, Green Flash, and more! Beerthirst’s Brian Tesolin will be in attendance to answer questions and he’ll be bringing prizes!

In Victoria tonight, Joe Wiebe will be hosting a holiday beer picks seminar at Vessel Liquor, where he will highlight 8 of his favourite festive beers.

On Friday, 12 Kings pub is hosting a Red Racer tap takeover, where they will be pouring 8 beers from this year’s Alpine Adventure advent calendar.

On Saturday, Foamers’ Folly Brewing in Pitt Meadows is throwing a third birthday party and releasing a special anniversary beer.

In Duncan on Saturday, White Sails Brewing is hosting their Not Quite Christmas Craft Cask-O-Rama, with casks by White Sails, Longwood, and Wolf, brewed in collaboration with three top local home brewers.

On Sunday, Parallel 49 will be holding Brawnywine II. This annual celebration of barley wine will showcase ales from 7 breweries and 4 from Parallel 49 themselves. I went to this event last year and it was epic! #barleywineislife