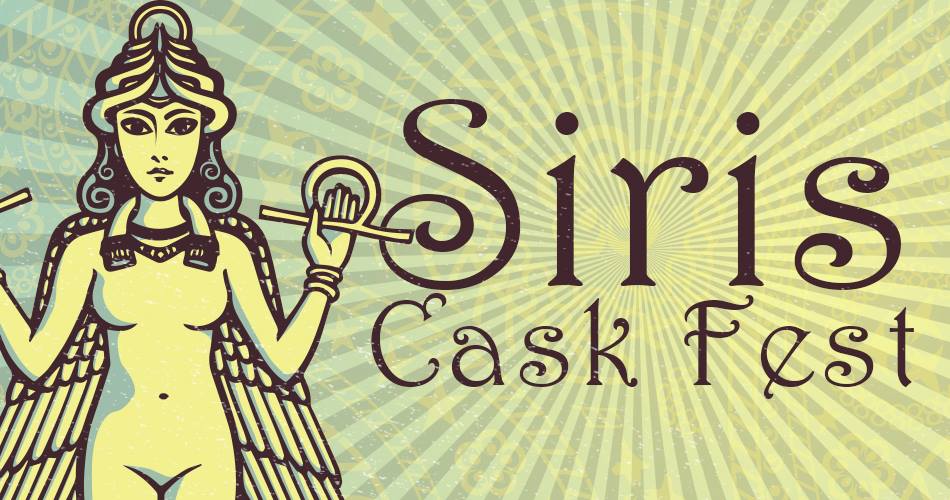 The goal of the festival is to provide a venue to showcase the amazing skill of our female brewers, reaching back to a time when the important duty of brewing beer was exclusively the role of women in society. Siris was the original goddess of beer in pre-Sumerian mythology.

The other goal for the festival is to provide a bursary for Kwantlen Polytechnic University’s Brewing Studies program. The bursary will be available to female students, with the intention of helping achieve gender parity in the brewing industry.

Siris is helmed by three Associate Directors: Claire Wilson, Brewmaster of Dogwood Brewing, Ashley Brooks, Brewmaster of Big Ridge, and Julia Hanlon, Brewmaster of Steamworks. In addition to addressing the festival, all of them will be supplying casks. MC for the event is Nancy More, the first female Brewmaster in North America and instructor at KPU.

From Julia Hanlon: “. . . this small club . . . needs more members, so that in the future nobody will feel compelled to ask the question about what it means to be a “female” brewer. The Siris Cask Festival and bursary is one step towards this and I am very honoured and proud to be part of this event to help more female brewers join this amazing community!”

In keeping with spirit of the festival, the first hour will be open only to women. After that hour, the ticketed public will be allowed in.

Q: Who are the brewers? See Siris Brewers Bios

A: There are only three craft breweries in BC that have women designated as head brewers, but there are dozens of women working at every craft brewery. We approached almost all of BC’s craft brewers to have their female staff produce casks for Siris. The response was immediate and enthusiastic.

Breweries that didn’t have a woman as an active member of their fermentation staff almost all had women working for them with brewing skills—either attending brewing school or as home brewers, or from working with other breweries in the past—who stepped in and brewed, again with enthusiasm.

For breweries without the benefit of female brewers in-house, we were able to connect them with female brewers from inside the industry: cicerones, inside staff, account managers, and others who had the skill and love of brewing. In the end, it all came together.

For an updated list of all the breweries and a short bio of each brewer, please click on this link Siris Brewers Bios

Q: Are you women? Who’s running the show?

A: No, we’re a non-profit society that organizes the largest and best-attended cask festivals in BC. We’ve done the behind-the-scenes organizing to get the space and the casks together, but it’s not our show—we are just holding the curtain for the important players, the brewers.

Q: So are you speaking for the women of brewing?

A: No. The Women of Craft Brewing don’t need anybody to speak for them. All they need is a place to speak for themselves. As such the TCCFA has only two mandates: to facilitate a great cask festival, and to use ticket proceeds to endow a bursary available to female students at KPU. The rest of the festival is up to the brewers themselves. We’re as excited as anyone to see where they take it. That’s part of the reason why it’s women-only in the first hour: networking, celebrating, sharing and enjoying great beer.

Q: How much is the bursary? How will it be awarded?

A: Our pledge to KPU is set at $1500 for this festival. We’re planning on driving that number higher—as high as we can—through merchandise sales and donations. The award criteria is handled by the finance department at KPU, but the award will go to a female student entering their second year who demonstrates financial need and meets the minimum GPA.

Q: Is that a depiction of Siris in your logo? Isn’t Ninkasi the goddess of brewers?

A: It’s actually a stylized image of Innana, the mother-goddess that originated in Uruk. There are no definitively identifiable images of Siris, or indeed of Ninkasi. Siris actually preceded Ninkasi as the goddess of beer and brewing among the Semite peoples and later got folded into Sumerian mythology as a daemon daughter of Ninkasi. We chose Siris because she was earliest, and because there’s a famous brewery named after Ninkasi that we didn’t want to be confused with. Ancient anthropology is fun, but not simple.