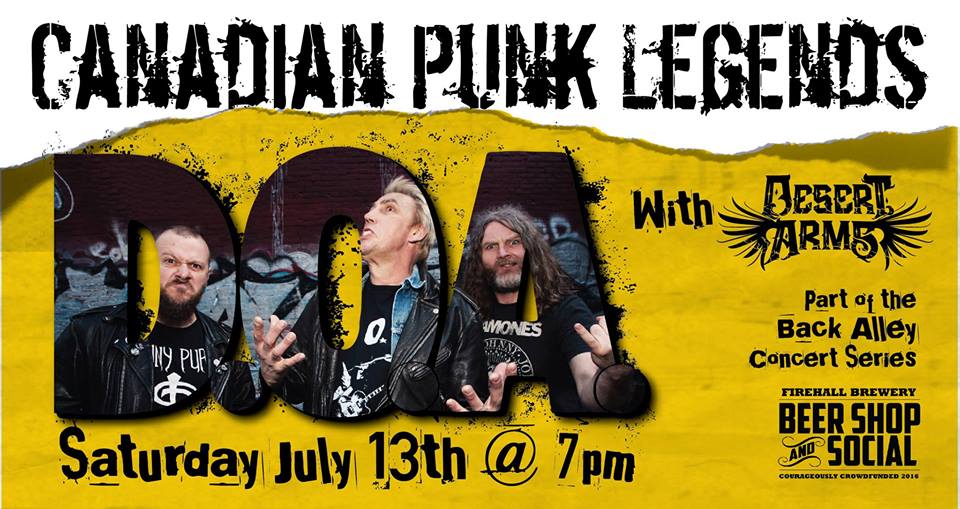 Canada’s Legendary Punk Kings… the Godfathers of Canadian Punk … D.O.A. … ARE COMING TO TOWN! The Okanagan’s only D.O.A. concert this year is exclusively engaged at the Firehall Brewery’s Back Alley Concert Series 2019, in Oliver, British Columbia on Saturday, July 13th. Bookings are already backed up at tattoo parlors for tats and piercings.

For nearly 25 years, D.O.A. has been happily slashing away at all manner of philosophical enemies. They’ve travelled the globe almost continuously since they formed in 1978; they released their first snarling piece of vinyl, the “Disco Sucks” EP in June of that year. That slab of plastic opened the door to international prominence, riots, rip-off record companies and three generations of fans. D.O.A.’s sound and philosophy has been held together by Canada’s Godfather of Punk, Joey “Shithead” Keithley. D.O.A. has travelled a long, tough road that has taken them around the world, and the raw energy continues. The band has never been more active, having released their second DVD, D.O.A.’s “Greatest Shits”. Mayor Larry Campbell of Vancouver declared December 21st to be “D.O.A. Day” in Vancouver. The band has also been featured in punk and political books, TV and radio documentaries around the world

There is so much we could say but, screw it! We say this. July 13th in Oliver is going to be a massive punk extravaganza. Doors fly open at 7:00pm, and Oliver’s own killer band Desert Arms will open the blast and leave you weeping. Tickets are only $20, and we only have so many, so when they’re gone they’re gone. Get ‘em at the Firehall Brewery when you’re in for a pint, or snatch ‘em here on EventBrite before they escape to quicker hands.

Come join in the power and non-compromise that is D.O.A.

Are there ID or minimum age requirements to enter the event?

Yes, in fact, bring a couple pieces of ID please. No minimum age, but please don’t bring the whole daycare. Minors will be identified and not served alcohol.

What can I bring into the event?

Do I have to bring my printed ticket to the event?

Is it ok if the name on my ticket or registration doesn’t match the person who attends?

What are my transportation/parking options for getting to and from the event?

If you’re staying at the Oliver Coast Hotel or a motel in town, you’ll be within walking distance of the show.

If you’re driving, event parking is on the alley-side of the building. We will have parking attendants assisting with traffic control, keeping an eye out for intoxicated driving.

Once the parking lot is full, it’s every man/woman/other for themselves. Illegally parked vehicles will be towed at the owner’s expense.

Phone numbers for Oliver’s Taxis and Shuttle Services will be available at the event, and forever on Google.

What if it rains?

Get wet and have fun!