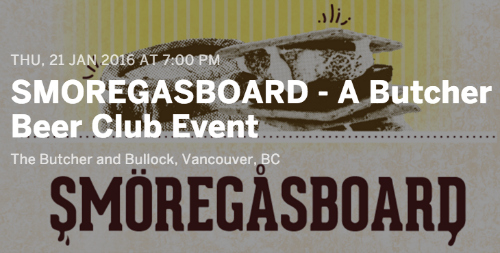 When Whiskey Ambassador Matt Jones sends you an empty 200L Knob Creek Bourbon Barrel and tells you to “get creative” we couldn’t think of better collaborators than the geniuses over at Parallel 49 Brewing. The result – a one of a kind bourbon stout. In true Beer Geek Fashion we’re rolling the whole barrel down to Butcher & Bullock and tapping & pouring from it directly.

To compliment the stout we will have a table dedicated to all things chocolatey and “s’morsey”.

Imperial Chocolate Stout Collaboration with Parallel 49, Knob Creek & Donnelly Group ~ It’s no secret that we at Butcher & Bullock love our beer. Over the past 3 years we’ve been steadily adding extra taps, heavily rotating featured seasonal beer offerings, and working with breweries and beer importers to make sure there’s always something interesting on tap. This past fall we were gifted an intact, water-tight, one-time used American Oak barrel by our friend Matt Jones, Whiskey ambassador for Beam Suntory. Not being distillers ourselves and no whisky to age – we sat on the barrel for a few weeks before linking up with our friends at Parallel 49 to talk about some up-coming events. They were about to brew their S’more stout… we had a barrel and some extra bottles of Knob Creek… thus the P49/Butcher & Bullock Imperial Chocolate Bourbon Stout was born. Head Brewer Graham With used a few bottles of Knob Creek 9yr Bourbon to season the barrel as well as a few bottles to add a massive punch of bourbon to the beer itself – their S’More stout, but without the vanilla. “Knowing that simply aging an Imperial Bourbon Chocolate stout in a barrel and kegging it has been done – we decided to take this event a step further…We won’t be force carbonating or kegging this beer. We won’t be bottling or packaging it at the brewery. We are rolling this barrel into Butcher & Bullock and tapping & pouring the stout direct from the barrel. The beer is literally a one-off. There are 200 litres and all 200 will be poured only at Butcher & Bullock.”

The night will be full of chocolate goodies & good times. Growler Fills will be available to take some of this amazing beer home from the first Butcher & Bullock Beer Club event of 2016.

With your $15 ticket you will receive one Bourbon Stout & access to the Cocuterie table.

Butcher Beer Club Members will receive an additional half pint with ticket purchase.