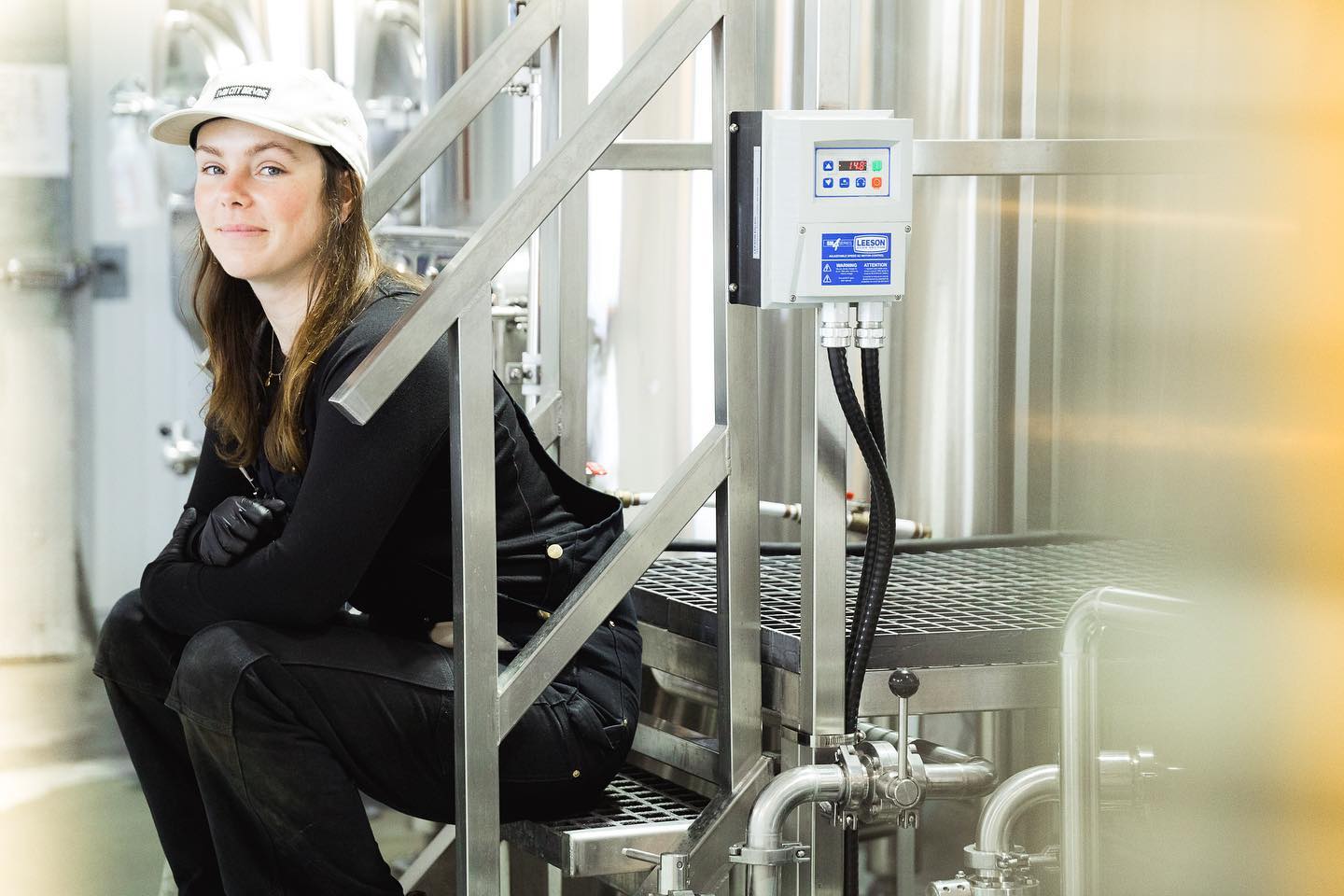 For at least the last 15 years I have been putting together International Women’s Day events, for which I search the province to find women who work in the beer industry. That is how I first met Tessa Gabneiewicz.

It was back in 2010 when I was thrilled to find out that Nelson Brewing Company had a female Assistant Brewer! I immediately sought her out and asked if she wanted to be part of the event, and would she create a unique cask for the occasion.

Our paths crossed again in 2018 when I found out that she was working as an Assistant Brewer at 33 Acres Brewing, and I asked her to create a unique cask for my Women’s Day beer dinner. She did but could not personally attend due to an exciting career opportunity. I found out shortly after she had landed the role of Head Brewer at Land & Sea Brewing in Comox, which opened to the public in December 2018.

In late 2019 Gary Lohin (of Central City Brewing fame) approached me with a great opportunity in which five brewers yearly are chosen from around the world to brew in the UK. He asked me for suggestions of women in our BC industry. I forwarded Tessa’s name and was thrilled when she was chosen. Check out this video on about the occasion (Facebook login required).

Q & A With Tessa Gabneiewicz

HOW LONG HAVE YOU BEEN IN THE POSITION AT LAND & SEA?

My love of beer, curiosity, and a willingness to learn. After college, I needed a job, and I’m forever grateful that Nelson Brewing was hiring.

HOW /WHERE WERE YOU TRAINED?

I learned under the tutelage of Mike Kelly at Nelson Brewing about 13 years ago (2009), and I’ve been learning ever since!

WHAT WERE YOUR PREVIOUS JOBS?

In college I took Robotics and Automation, so I was working in that field before landing a job at NBC. But I’ve also been a ‘professional opportunist’ of sorts, meaning I’ve found my way working as a land surveyor and helping manage a helicopter base while living up north of Terrace, BC.

I would say that ever since I can remember I have been interested in flavours and flavour composition. I was the kid making and eating everything from playdough to mudpies mixed with my after-school snacks, which forged me into an adult who loves to eat and drink. Being curious by nature, I wanted to know how things are made, with beer being no exception. I went from sneaking dad’s Black Label beer to trying my first ‘craft’ beer (Big Rock Grasshopper) and realising there is a whole world of beer to be discovered.

The best part of my job is being a catalyst for good people to get together and enjoy each other’s company, food and conversation. It means the world to me when someone lets me know that they’ve associated their ‘good time’ with a beer I’ve created.

Transforming an idea from raw materials and grain to glass is truly satisfying as well. On top of that, even if my resting brew face doesn’t always show it, I do enjoy problem-solving and cleaning—so I’m a good fit as a craft brewer.

DO YOU FEEL THAT FEMALES ARE A MINORITY PRESENCE IN THIS FIELD?

It certainly doesn’t feel like we are a minority anymore! It is so incredible to see there are plenty of women in craft beer these days. Back in 2010, there were less than 20 of us from around the province taking part in a women’s event. However, as much growth as there has been, we are still a long way away from being equal in numbers in the industry.

DO YOU FIND YOUR ROLE HELPS GET MORE WOMEN INVOLVED?

I’m not sure that my role as a head brewer helps other women get involved, but perhaps I can inspire someone to think that they too can brew. I definitely give my time to anyone who is seriously interested in the industry and would love to know how I could help more.

ANY SUGGESTIONS FOR WOMEN COMING INTO THE INDUSTRY?

Find a mentor, or someone who inspires you, and spend a day shadowing them. Getting into the thick of it will give you a good idea of what really happens behind the scenes.

No matter the position, it’s always good to have lots of tools in your toolbox, so shadowing different people in different roles and at different breweries is key. You may learn that bigger production facilities are or aren’t your thing, compared to say a nano or small microbrewery. Get out there and get your hands dirty.

FAVOURITE FEMALE MENTOR IN THE INDUSTRY?

…and Lundy Dale for keeping the community alive and inspired.

WHAT IS YOUR FAVOURITE BEER FROM YOUR BREWERY AND WHY?

Glacier Cream Ale. It is such an underrated style; so clean, crisp and crushable!

If I had to pick the beer based on technicality and flavour it would have to be Saison Dupont. However, for something I can always drink no matter what the adventure, or how far north I am…it would be Budweiser.

Just kidding…or am I? You can drink it in any community at about any temperature. Brewing it (including pre-InBev) is an engineering feat that I respect.

Hands down, opening Land & Sea Brewing. It was my third time being hired to help start a brewery—first there was Terrace’s Sherwood Mountain Brewhouse in 2014, then Campbell River’s Beach Fire Brewing Co. in 2016. But this was the first time I’d worked as the only brewer in the house.

When you have another team member with experience in the industry or homebrewing, it really helps to bounce ideas off them. I didn’t have that luxury this time, so it was just me going for it the best I knew how. If it weren’t for the amazing beer community and friends in the industry, I’m sure I wouldn’t have been able to get where I am today. North Island’s Cumberland Brewing, Beach Fire Brewing and Gladstone Brewing were all vital in helping us get our pints in a row.

Because of this platform to showcase my skills and passion, it led to being selected as one of five international brewers to brew in the UK.

TELL US ABOUT GOING TO ENGLAND TO BREW!

Every year, a UK-based pub chain called JD Wetherspoon. hosts an international brewing event for which they choose five brewers from around the world to brew their own beer at a UK host brewery. In 2020, Gary Lohin reached out to me about this opportunity, and I was selected.

My host brewery was Hook Norton Brewery in the village of the same name in Oxfordshire, England. It is a Victorian tower brewery built in 1849. Until 2006, the brewing process was powered by a 25hp steam engine that they fire up on occasion to this day!

I was invited to brew my Estuary Session IPA, which contains about 8kg of my own hand-foraged spruce tips in it. For reference, my brewhouse is 12hL and for Hook Norton we brewed 408hL. Needless to say, I couldn’t bring a whole spruce tree to England, so this required some interesting networking and problem-solving. Eventually, this led to Abbotsford’s Brendenhof Hop Farms. They pelletized my spruce tips in combination with my hop addition and sent 80kg of it directly to the UK.

It was truly a once-in-a-lifetime experience that I am forever grateful for.

A short-term goal of mine is to complete the Diploma in Brewing from the Institute of Brewing and Distilling.

Also, I have been asked many times if I’d want to open my own brewery, to which I reply ‘No thank you. I enjoy what I do’. I don’t want the stress of owning a business to take away from my love of brewing. However, Dave at LoveShack Libations (a nano brewery in Qualicum Beach) is doing it right! That’s a retirement goal of mine for sure.