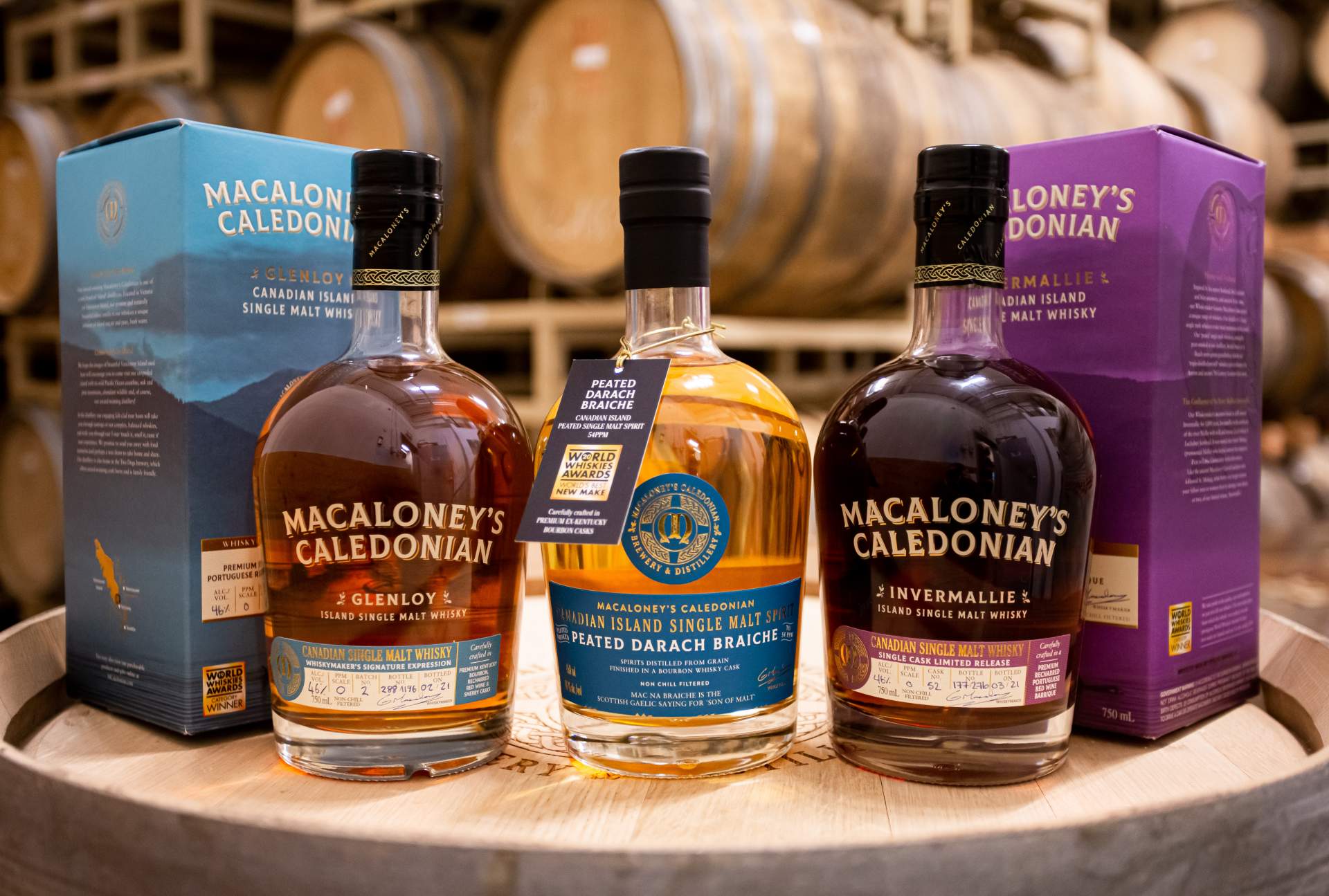 In the news this year, What’s Brewing has followed the tribulations of Macaloney’s Caledonian Brewery & Distillery. The suburban Victoria establishment was already dealing with COVID when insult was slapped upon injury earlier this year. The powerful Scottish Whisky Association (SWA) brought a trademark lawsuit designed to prevent Macaloney’s from marketing whiskies using terminology it deems infringes upon certain geographic indication protections it is sworn to uphold.

Impressively, Macaloney’s has managed to garner significant mainstream media coverage of their plight, including a spread in mighty Maclean’s magazine featuring the founder, Dr. Graeme Macaloney. His position in a David vs. Goliath battle with a UK-based trade association representing giant corporate interests is quite compelling.

Unfortunately, it’s not unique, because the SWA is known to go after small fish and has sued a Canadian distiller before. After a nine year campaign that almost exhausted the resources of Nova Scotia’s Glenora Distillery, a Canadian court finally ruled against the SWA and their claim on the geographical term ‘glen’. But they’re back for more, and amongst other words are objecting to Macaloney’s use of Glenloy as the title of their signature whisky.

Graeme Macaloney, a veteran of the highly regulated pharmaceutical industry before establishing his distillery, is hardly the type of person to get himself into a predicament like this out of careless negligence. Years ago, he approached the SWA proactively and sent them labelling samples for review prior to going to market with his products. So, the Scottish trade group had an opportunity to voice any objections at that point, but became interested in Macaloney’s only when it started making a name for itself by winning international awards.

“It’s costing us a lot of money and sleep,” Macaloney confided in our recent interview. “We had to find a topnotch BC lawyer. We’ve dug our heels in, and will defend ourselves to the hilt.” However, in the era of social media, it may turn out that Macaloney’s best bet against the corporate titans is the bad PR the SWA risks facing for chasing small operators.

“The court of public opinion may be having a positive impact on this case,” Macaloney intimates. “We’ve had our Canadian supporters send these board members scores of letters. Now the SWA has asked for 3rd party mediation, which is quite unusual. The Council may have concerns about a public backlash.”

A mediation hearing is slated for September 24th, behind closed doors. The SWA’s lawyers of course do not want any negotiations to become public, which gives Graeme cause for skepticism and some alarm. He hopes the SWA entered the mediation process in good faith, and that this is not just a tactic to drive up Macaloney’s legal costs.

“The SWA has done some other good things, where they track down legitimate counterfeiters,” Macaloney explains. “But most of their staff are lawyers, and they sometimes overreach themselves chasing small craft operators.” It’s hard not to agree with that.

For one thing, the SWA objected to the use of the Scottish-Irish name “Macaloney”  in their branding, even though founder Graeme was born with it. Also, they don’t like the use of “Island Whisky”, insisting that the term has Scottish connotations, although the Saanich-based distillery is most definitely on an island.

The funny thing about one of the other offending terms, Caledonia (what the Romans called Scotland), is that it was almost the legal name of the province Macaloney operates in.

If you live in British Columbia, it’s only a fluke of history that you don’t live in ‘New Caledonia’ instead. Back in 1806, famed fur trader Simon Fraser gave that identity to what we now call the BC central interior, where the river that bears his name originates, because its rocky geography matched what he knew about the Scottish Highlands. It became the de facto name for mainland BC. Later, in 1858, legislation was passed designating New Caledonia a crown colony and the future province of Canada was set to be formally enshrined with that appellation.

However, it turned out that Captain James Cook had discovered a small South Pacific island and called it New Caledonia for similar reasons, beating Simon Fraser to the punch by a few decades. To avoid confusion, Queen Victoria was tasked with a rebrand and chose the name British Columbia as an alternative for the North American territory. As it happens, a few organizations around BC still refer to the original name, such as the Diocese of Caledonia and College of New Caledonia. Meanwhile, any aspiring whisky makers in the South Pacific had better watch out for the SWA.

When it’s OK because you’re big

The Scottish Whisky Association has their own board of governance they call the Council. Most of its members hail from large multinational drinks corporations. Within the Council members’ own operations, one can find occasional evidence of the type of hypocrisy that big money creates.

Take, for example, drinks giant Diageo PLC, probably the SWA’s largest member. Amongst their brand portfolio are huge-selling whiskies from the Indian subcontinent named McDowell’s No1 and Bagpiper. The latter sports the image of a handsome chap wearing a turban and highland regalia, replete with pipes—a complete violation of the principles the SWA seeks to enforce.

Diageo has responded to eventual SWA pressure by agreeing not to sell these products by those names outside India. But the labels weren’t shut down. The SWA opined that “In India, where those brands have been on sale for several decades, it is understood that McDowell’s and Bagpiper have a reputation locally as Indian brands.” Apparently, the Association is satisfied to approve Scottish-sounding Indian whiskies in India when their distiller has three seats on the Council.

Note that Diageo’s compliance didn’t materially change the market for these products because they have always been sold primarily within India—where the market is so vast that McDowell’s No1 can claim to be the world’s largest selling Whisky brand.

Diageo, by the way, has sometimes felt constrained by the regulations that the SWA seeks to uphold, since they don’t allow producing anything overly inventive with Scotch whisky…like ‘Scotch infusions’. Such modern takes on Scotland’s traditional beverage are just not cricket, you know.

When it comes to policing the world of whisky, it’s probably not the giant-selling producers that are the SWA’s biggest headache. It’s the smaller counterfeiters around the globe that are harder to track down…which is why the Association implores industry members and interested public to “Help us protect Scotch Whisky”, and provides a handy document that outlines what constitutes a transgression according to the Scotch Whisky Regulations.

Then there’s the phenomenon of modern craft distilling, which has seen an explosion resulting in over 2000 craft spirits vendors now operating in the USA. This could potentially become even more difficult to manage. Fortunately for the SWA, the drink is generally spelled “whiskey” (with an E) south of the border, and they have traditions like bourbon which are clearly unrelated to Scotch. Still, the last thing the SWA needs is to have to monitor oodles of new products from thousands of craft operators that may or may not be aware of its rules.

In fact, Graeme has offered his services to the Association for this exact reason. “I will partner with you guys to educate rather than litigate”, he has told the SWA. They however have not taken him up on his offer to lecture on standards of origin labelling to North America’s many potential future offenders. 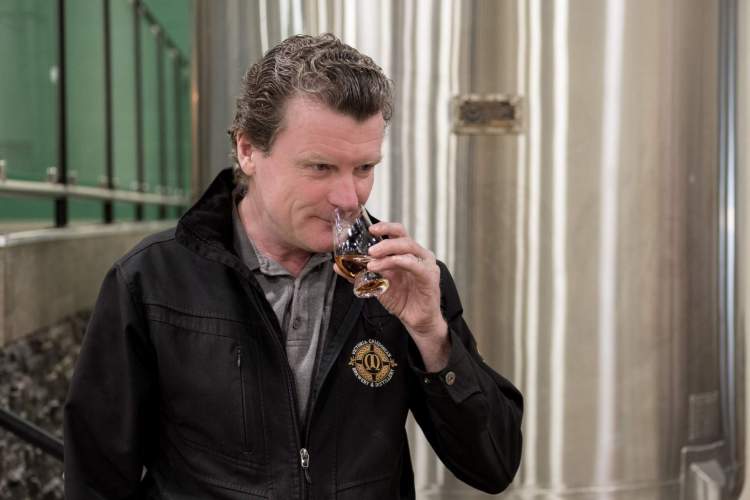 Could it happen to other BC distilleries?

Although Macaloney’s is the Canadian distillery currently in the SWA’s crosshairs, Graeme feels that it could be just a matter of time before the Association picks on its next craft target. Unlike the USA, the Canadian lexicon encompasses many terms that overlap with Scottish and British geography, such as the aforementioned Caledonia, as well as the use of ‘Glen’.

Also, Macaloney isn’t the only BC distiller with a Scottish-sounding name. Over at Central City Brewers & Distillers, the main spirits brand is named Lohin McKinnon after its two primary crafters, Gary Lohin and Stuart McKinnon. The Lohin McKinnon bottle labels clearly state Made In Canada, but so do Macaloney’s and that hasn’t stopped the SWA from swooping in. So Graeme feels that his battle is ultimately not for his company alone. On September 24th, he’ll take the next step in this journey.

Public opinion matters: how you can help

The team at Macaloney’s believes ongoing public pressure on the SWA can be an effective way to discourage the SWA from pursuing punitive lawsuits against craft distillers like Macaloney’s. They are seeking craft beer and spirits fans who are willing to write a letter of support that will be directed to the Association’s board members.

To show your support, reach out to [email protected] with ‘SWA Assistance’ in the email subject line.