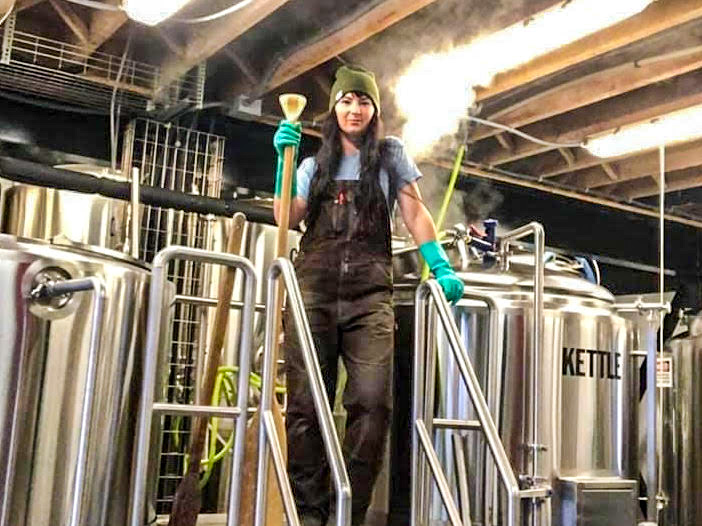 I first met Robin in 2018 at a VanBrewers (Vancouver Homebrewers Association) meetup. As a woman who is also looking to connect with women in the beer world, it was great to see a new face at the meetings. During our conversation, I found out that she and her partner Andy Richards had just moved from Edmonton, and so we had something in common to talk and reminisce about.

Right from this first meeting Robin struck me as a high energy go-getter who knew what she wanted and knew how to get it. It wasn’t long before she started entering homebrew competitions and winning, so it was just a matter of time before the next step of opening a brewery.

Not only can this woman brew, she also knows how to use her power tools!!! Together with her partner Andy, the two practically built their brewery with little outside help. Very impressive indeed!

I was introduced to the beer industry as I was about to become unemployed. My partner Andy and I were living in Edmonton at the time, and renovating our house to sell, so we could escape to Vancouver Island. (Andy is from Victoria and the Island was calling him back.)

We were getting ready to sell our house and all of the parts were falling into place, except that there was no work for me out here. So, Andy and I decided we would start a business with our proceeds from our house!

Andy got a job transfer to a company in Surrey, and I went to Simon Fraser University and did the Craft Beer and Brewing certification program where I met SO MANY people in the industry and we realized that we were, in fact, choosing the right business for us.

HOW WERE YOU TRAINED, IMPORTANT PAST JOBS?

Both Andy and I were homebrewers in Edmonton for fun. I had acquired the brewing lab skills from my Biology and Chemistry degree and worked in a lab for about ten years, so I had a knack for the aseptic techniques that are practiced in brewing. During my time in Edmonton, I also always held a part time serving job or bartending job because I loved working in the industry so much.

The SFU brewing course helped me get into the business mindset for opening up a brewery. Most importantly, I was hired by Russell Brewing while still in class, and became their third brewer. I didn’t work there very long, but I learned a lot from brewers Dave and Brian. It was a steep learning curve, and I definitely was more prepared to brew on the big tanks when we opened.

I have a science background and am very science- and math-minded, so the brewing part was very exciting for me. Being able to create something that is so enjoyed by others (and me of course!!) really is amazing.

Back when I was barely of legal age to drink, I was the only girl that was a beer drinker; I never drank coolers or hard liquor like my friends – I was always a beer girl even if it was only macro beers back then.

DO YOU FEEL RESPECTED IN YOUR PRESENT ROLE?

Yes absolutely. I’m not going to say that people aren’t surprised or think that I am joking when I tell them I brewed that delicious beer that they are drinking, but once I convince them that I actually have an important role here people are really great about it. I also think that since Andy and I are at the brewery every day from open to close, and we’re brewing, packaging and doing 99% of the serving (especially during COVID), our customers know we work really hard and know that this place is built with our blood, sweat and tears.

HOW DO YOU FEEL ABOUT BEING A MINORITY FEMALE PRESENCE?

Honestly, I like it. I love the extra camaraderie there is when I meet another female in the industry. I feel like we are just as good (or certainly can be with the right training and experience) as the non-minority male presence. I wear many hats here at DMB, so it doesn’t feel like I’m a minority that often.

DO YOU FIND YOUR ROLE HAS OR COULD BE OF HELP GETTING MORE WOMEN INVOLVED?

Yeah. I feel that holding events like the Pink Boots Collaboration Brew Day on International Women’s Day can really help women see what goes on behind the scenes in the industry. At our brewery we encourage our staff (male or female) to do the Cicerone® training and really try to educate them about the beers above and beyond what they might need to know to sell a pint.

I love coming into the brewery not really knowing what the day will bring. I like making my own schedule and now that we have the most amazing staff, I have more time to be creative! We have started a small batch program and have been brewing a bunch of weird test batches between our big batches. I know everyone says this, but I love that if you work in a brewery, you are automatically friends with almost all the staff at other breweries.

I would have to say Leaving Tsunami Hazard Zone IPA. It’s a super light 4.7% ABV beer that has a complex hop presence from dry hopping with uncommon hops. It has a slightly lower pH so it’s a little tart and thirst quenching. I LOVE IPA and this one is a weird one that doesn’t really fall into a category that is traditional. Also, our customers love it too.

FAVOURITE FEMALE/MENTOR IN THE INDUSTRY AND WHY?

I’ve never met her, but Megan Stone is the coolest, most badass female in the industry. I started following her on Instagram when she was brewing at Modern Times Brewing in San Diego. I had some of their beer and it was fantastic. She works so hard and looks great doing it too. (I wish I was brave enough to have crazy hair like hers!)

Looking great isn’t a prerequisite of the role, but it helped me realize that I don’t have to tone back my (sometimes) extravagant style to fit in with the guys. It doesn’t have to be all brown overalls and boots.

ANY SUGGESTIONS FOR WOMEN GETTING INTO THE INDUSTRY?

Don’t expect to get treated any differently than the guys. If you gotta move kegs to get the job done, then you gotta move kegs. This I think is common in many industries that were traditionally male-centric; as long as you can do the job you can have the job.

Also, if you want to brew in a brewery and you’re not homebrewing, you should start now. It’s so important to develop your palate and know how ingredients work together. Read books and do online courses; it’s a competitive industry so you have to set yourself apart!

BIGGEST ACHIEVEMENT TO DATE? GOALS FOR YOURSELF?

Opening a brewery without investors, then staying afloat amidst a pandemic during our first year of operation.

Goals? Oh man, being able to take a holiday? Really though, I would love to place in the Canadian Brewing Awards one day. Maybe this is our year!

More from the Mid-Island

To The Pacific Rim: Exploring The Breweries of BC’s Far West