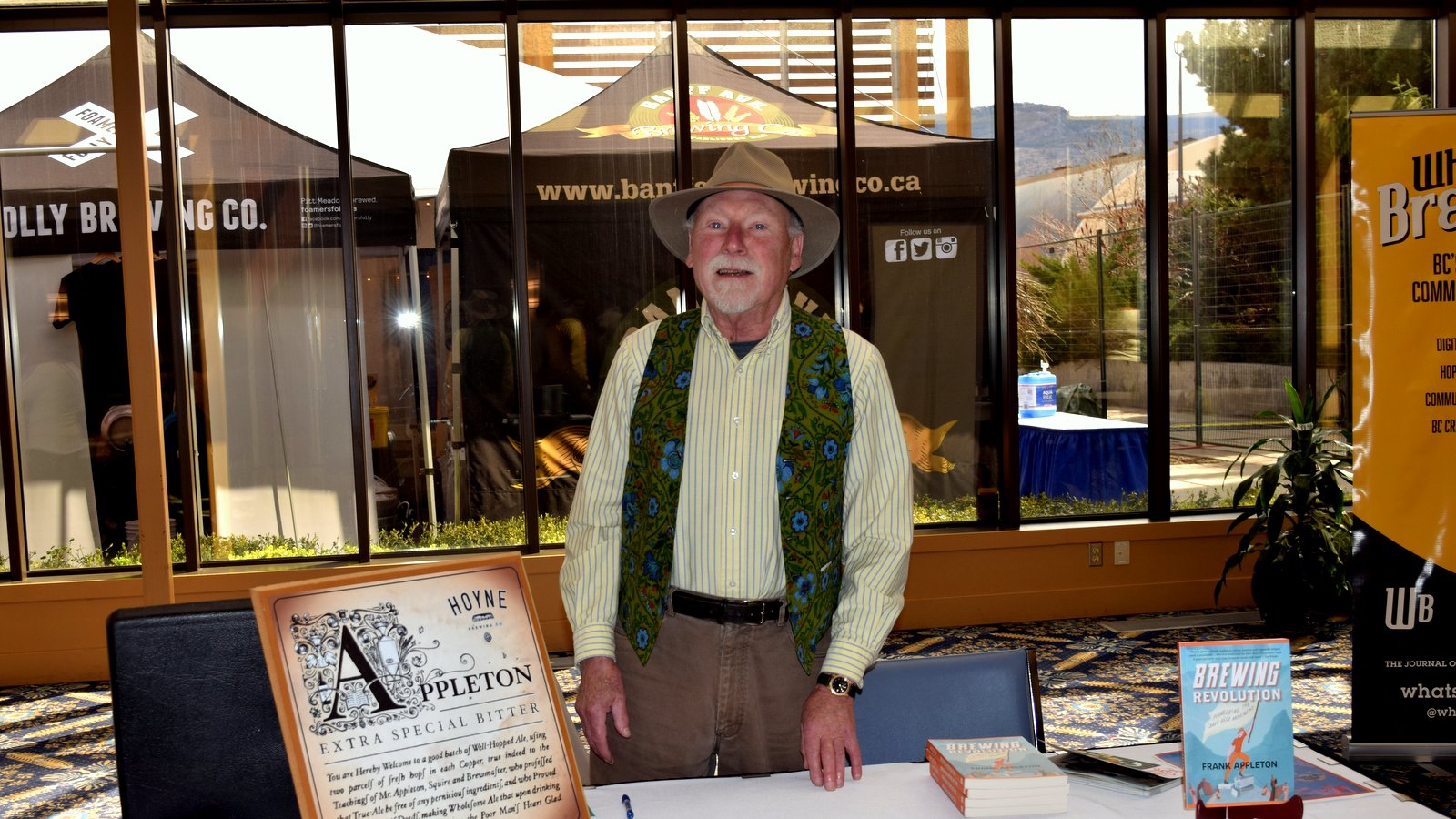 I
t is very sad indeed to observe the passing of Canadian brewing pioneer Mr. Frank Millington Appleton, on April 25th at the age of 80.

Canada’s craft beer industry uniformly recognizes the tale of its co-founders, John Mitchell and Frank Appleton, as its national Book of Genesis. If you’re not familiar with the fabled Origin Story, you’ll find it recounted in myriad forms online, in books and magazines. A short primer can be found on the BC Ale Trail website if you’d like to bone up on this.

The senior member of the duo, John Mitchell, passed away in June 2019. The next month, a few of us were able to stage a Celebration of Life at Central City Brewing’s now-defunct Red Racer Taphouse in downtown Vancouver. For the occasion, we reached out to Frank with a ‘guest of honour’ invitation to attend. We knew it was a long shot, since that would have necessitated significant travel from Appleton’s Edgewood home, in BC’s West Kootenay region.

As it happens, the then-78-year-old Appleton shared with us that he was dealing with some health issues necessitating a series of medical appointments during July, and therefore would have to decline. So, after weeks of knowing about John’s health and impending death, we suddenly had reason to be concerned about Frank too.

Nevertheless, Appleton the gentleman sent through a very nice message for the occasion, which read in part, “John was my great friend for over 30 years. His passing was a sad day for me. He was the man with the idea… Really a wonderful person, the best ‘front man’ the craft beer movement needed at just the right time. I will miss him.”

Looking back now, we realize how fortunate we were to have the privilege of celebrating John’s life and hearing tributes like Frank’s, because just one year later, any such congregation would have been impossible.

Sadly today, with the vaccine rollout still underway, the time is not yet ripe for the beer community to come together for Frank, and so no funeral or gathering will be held due to COVID-19 restrictions.

If and when the opportunity to celebrate Frank ever arises, it will of course be all the sadder that John Mitchell won’t be able to attend or send his thoughts about his former compatriot. It should be mentioned however that John’s longtime wife Jenny has expressed her condolences on Frank’s passing; this has been shared to followers of the Friends of John Mitchell Facebook page by its curator, longtime family friend John Ohler. Jenny knew Frank well, considering that he lived in the Mitchells’ home for some time during those early startup days. She has some pretty amusing stories about the younger Appleton letting his hair down (such as he could) around the house. If we could only stage another gathering, perhaps she’d share one or two.

Regrettable as all this is, it drives home how grateful we should be that Frank accomplished something before passing that John never managed: he left us a memoir, in the form of his 2016 autobiography, Brewing Revolution: Pioneering the Craft Beer Movement (Harbour Publishing, 2016). With so many tellings of the birth of Canadian craft beer in print, it was only right that one of the two men would put pen to paper and give us a history that is directly from the source.

One fortunate aspect of the volume’s publication is that it necessitated a book tour…or, at least, the closest thing to such that a BC-based beer author can have. So Frank came out to some of the big beer events like Victoria’s Great Canadian Beer Festival and Penticton’s Fest of Ale. That allowed more of the burgeoning beer community to meet him in person, and gave he and long-time partner Jean Bassett a chance to meet us. No doubt, for many that was a gift just as big as the book.

Frank the writer: getting the story in print

Of the many things that can be said of Frank, one might be: he was BC’s most important beer writer. In his post-brewing career as freelance journalist, Frank was a regular contributor to various publications, and was clearly a professional wordsmith. Although he didn’t write primarily on the topic of beer, he certainly wrote the most important thing ever published in Canada about beer, in the form of his 1978 Harrowsmith magazine ‘manifesto’ that helped birth a revolution. Since that was long ago and hard to find, most of us hadn’t read his work before. Fortunately, Appleton’s writing chops came into full display through his artfully-compiled autobiography.

There is more to Frank’s book than the Origin Story alone. Reading it, one is reminded how important he was to breweries even outside BC, including Oregon’s mighty Deschutes Brewery, which became one of the top ten craft breweries in the US.

More importantly, one also gets a sense of the man himself. An opinionated but gentle soul, the UK expatriate Appleton wasn’t shy to voice his point of view, as those who heard him speak on occasions such as his 2016 presentation at KPU Brewing and Brewery Operations will know. At the same, as this author will attest, he was a good listener with a big heart, and those traits come through in ink.

Today, the person whose name most plugged-in BC beer geeks would associate with the term “beer writer” is Joe Wiebe, author of Craft Beer Revolution: The Insider’s Guide to B.C. Breweries (Douglas & McIntyre, 2013). A prefacing quote from Joe adorns the front cover of Frank’s book.

Wiebe also duly filed a review of Brewing Revolution, in which his assessment of Franks’ writing was, “Throughout, Appleton’s style is entertaining and easy to read. He is especially deft at handling dialogue, bringing to life scenes from his past with a cinematic clarity. All in all, this book is a welcome addition to any beer lover’s library.”

Keeping with the BC beer writer theme: longtime Province beer columnist Jan Zeschky penned a review of Brewing Revolution in November 2016. Jan’s incredibly well-written piece essentially follows the Origin Story sequence, with quotes from the book and the author.

With Frank’s passing this week, it was fitting that Hoyne posted the announcement through which much of the BC beer community learned the news. Since long before however, the ‘History’ page on Hoyne Brewing’s website has conveyed how much Appleton’s mentorship meant to Sean.

To many BC brewers, Frank was the pioneer who was also a technician, and they recognize the critical value his skills brought to the vision of John Mitchell and others, just as their own skills bring life to the breweries and products they work with. Appleton’s technical skills come across in his book, with a chapter or two that dives into the nuts and bolts of brewing. 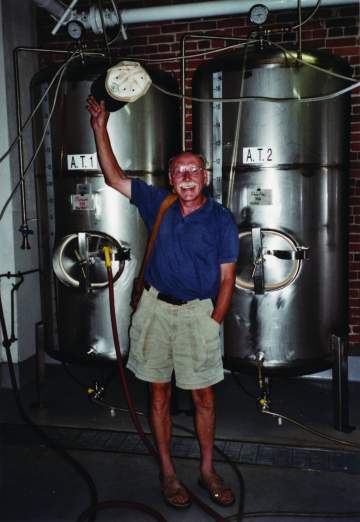 This tribute isn’t a book review however. When it comes to that, we at What’s Brewing defer to our own long-time beer book reviewer Ted Child, who submitted his take on Frank’s tome for our Winter 2016-17 issue. Of Frank’s writing, Ted astutely noted, “Indeed, those years of journalism experience have served Appleton (and his readers) well. He not only recounts his own personal experiences but is able to explain complex subject matter including microbiology, brewing science and practice, BC’s liquor laws and political changes, and much else.”

We know that Frank Appleton, working alongside John Mitchell, was Canada’s founding craft brewer. Additionally, as a publication that has highlighted many very good writers including those noted above, we tip our cap to Frank for the combination of writing and brewing skills that made him a true dual threat, and ultimately a pioneer of the BC commercial brewing, homebrewing, and beer appreciation communities.

A toast is raised in honour of a multifaceted, talented, opinionated, gentle man. 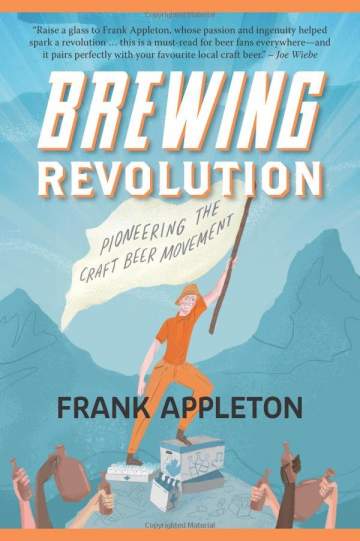