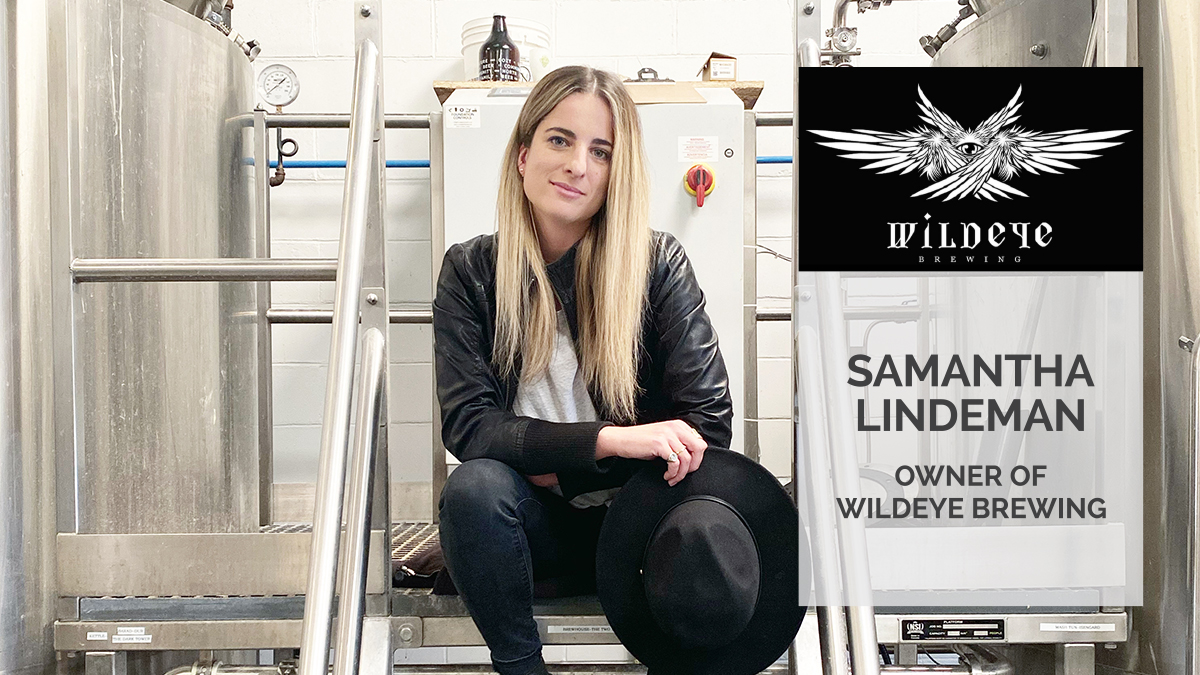 I first tried Wildeye‘s beers about three years ago at an event, and their beer ran out really fast! At that time they were contract brewing out of Factory Brewing (as it was called at that time). In late May of 2019, they finally opened their brewery/tasting room in North Vancouver, an area that has definitely become a destination craft beer hub. The owner and conceiver is Samantha Lindeman, and as of this writing she is not even thirty!

And if Samantha’s last name sounds familiar to you, it should. Her heritage is from the Lindeman family-owned winery, founded in Australia in 1843. So how did a woman who grew up in the world of wine end up opening and running a brewery? Read on…

How long have you wanted to have a brewery?

Since I came up with the idea in my head. What do they say? If you can’t get the dream job, build one?

How much of “you” is in Wildeye?

I spend every day and night thinking and dreaming about Wildeye and the next steps for the brand. It’s quite hard to shut it off, but I couldn’t imagine it any differently.

As owner and principal, what role did you play in creating this brewery?

It took me years to create the vision of Wildeye Brewing in my head. After I was confident in the business plan, I took it to friends and family, waiting for them to tell me that I was out to lunch. Every single person felt confident in my plan, so at that point I felt I had no option but to move forward. I handled every stage of the build out from start to finish.

‘Wildeye’ came from our love for wild ferment beers. The logo was inspired by an angelic creature called a seraph. We are also just a little bit wild, so the name seemed fitting.

Your background and name are from the wine industry, why the change/switch to craft beer? What brought you into the industry?

When I was working in the wine industry, craft beer wasn’t really talked about like it is now. We had a handful of craft breweries in Vancouver, but most people I knew didn’t talk about it much. Then while I was working for a winery in Australia, I came across a new craft brewery nearby and I couldn’t believe the complexity of aromas and flavours in the beer, much like a wine. It was nothing like the American lagers that I was used to. From that moment on, I started researching craft breweries around the world, and my passion for beer surpassed my enthusiasm for wine.

How were you trained?

I dabbled in college but what benefited me the most was asking for a TON of help. You would be surprised by the number of people that have built breweries or other companies that are so willing to help. With all kinds of things like what chemicals are needed for a boiler, I did not know by the way.

How involved are you with the day to day operations?

I have a hand in all the day-to-day operations while focusing the majority of my time on sales. It’s something I can’t ever see changing. I plan to be sitting at the bars when I’m 60 still pushing Wildeye.

Have you ever brewed? Do you get involved with the brewery planning and ideas?

As much as I would love to spend time brewing, there just isn’t enough time in the day. We schedule “beer storming” sessions and often create recipes as a team. I also like to involve our kitchen staff, front of house managers and sales reps to the sessions. It’s important to me that everyone at Wildeye is excited about the beers we are making.

You appear to have a focus on women on your team, from brewers to front of house, was that planned?

It’s very important that we support women in the beer industry, but I didn’t go out of my way to hire women in the roles available. It just so happened that the best fits for our team were female. I think it’s also a testament to how putting women in the positions of power will result in more inclusivity for women.

As a woman, do you feel respected in your work?

I do. I feel that the times of not feeling respected are fewer and far between. It should be about the beer at the end of the day, and not who’s selling or brewing it.

Are there advantages/disadvantages of being a woman in the industry?

I believe that there are advantages and disadvantages in the industry regardless of gender. There are some obvious ones in the beer industry, but you don’t need to grow a beard and own a plaid shirt anymore to brew and sell delicious beer.

What do you love about the industry?

I love how connected everyone is in this industry. It’s all about collaborations and working with the community but nothing beats sitting at one of my favourite local bars crushing a Wildeye after a long day.

What is your favourite Wildeye beer and why?

My favourite beer is our Belgian Blond Rosé. Michael, our brewmaster, has a passion for Belgian beers which you can truly see come through in this beer. The rosé part of the beer is a collaboration with our friends at the Hatch Winery. I drove down to Kelowna and back in an afternoon to pick up Pinot Noir skins moments after they were crushed.  Bringing our love for beer and wine together in this collaboration was very exciting.

What is your favourite beer outside of your brewery and why?

Field House Brewing and Four Winds Brewing have always been my favourite local breweries. I like to try something new each time but Quadrennial was next level.

Favourite female in the industry?

This may sound a bit vague, but I look up to every woman in the beer world. Together we are building a more inclusive industry.

What sets you apart from the other breweries in Vancouver?

I wanted to build a brewery that was inclusive to all. Somewhere that everyone would feel comfortable visiting and spending their day or evening just hanging out. We also have a killer chef, Erica. She has been creating some elevated dishes that pair really well with our beers. Before COVID-19 we focused on in-house beer events and always had live music. We hope to bring that back soon!