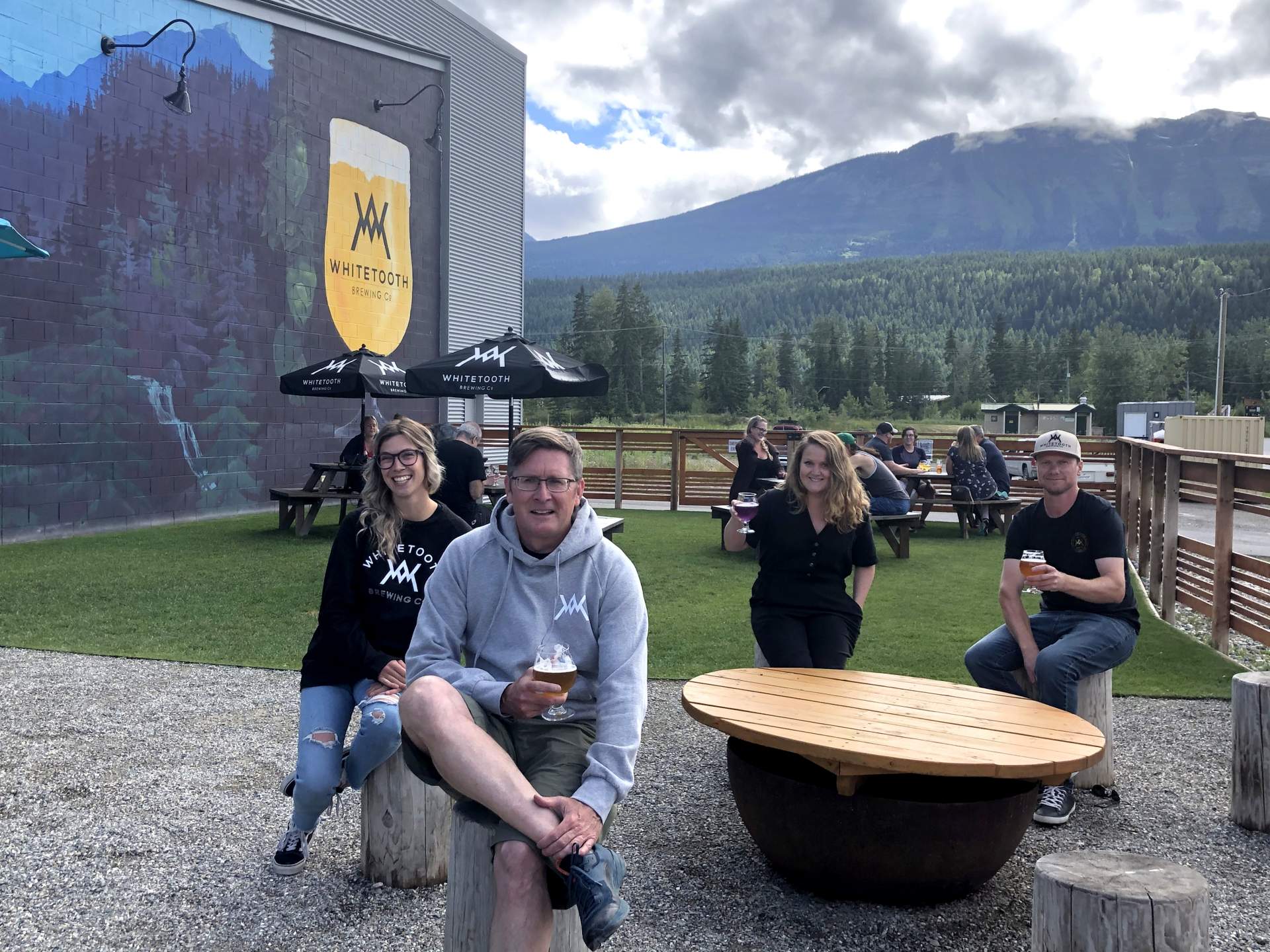 For BC’s breweries, 2020 has been a year like no other. But most haven’t ridden the roller coaster like Whitetooth Brewing. Surviving the pandemic was the primary focus during Spring 2020. Half a year later, during an online ceremony on Saturday, September 12, the brewery from Golden, BC, became the province’s big winner at the 2020 Canadian Brewing Awards with three gold medals, one silver and one bronze.

Let’s hear about how 2020 has gone from founder Kent Donaldson.

Q. When this year’s Canadian Brewing Awards were held last month, Golden BC’s craft brewery became the most golden of them all, as you came away with three gold medals and five total. Have you been able to explain this feat?

A.  There was an element of luck for sure, but we also attribute success to:

We’ve been operational for four years which has allowed time for Evan to perfect our recipes.

Q. Our beer review department Beer Me BC reviewed a couple of your brews recently including the Icefields Belgian Inspired Pale Ale and La Tenace Belgian Single. Has Whitetooth been going in a Belgian direction lately?

A. We’ve been brewing Belgian-inspired beer styles from day one of operations.  We did make a conscious decision to brew both Belgian-inspired and West Coast-influenced beer styles, mainly because we were super nervous about starting off brewing only Belgian styles in an East Kootenay town with a population of 3800.  We try our best to offer accessible Belgian flavours for the masses.

Q. What kind of bump did you receive from your burst of publicity?

A. So far we’ve seen a minimal bump in sales.  Let’s just say we’ve been more focused on making beer, rather than selling beer, so we need to boost our sales efforts!

Q: When the COVID-19 shutdown hit in March, how bad was the shock?

A: Does anybody anticipate a pandemic? We normally slowdown in spring once the ski hill closes for the season, and we usually have a cash cushion built up from our high-season winter. However, the covid shutdown was a severe, step function down-draft. You quickly adopt a siege mentality because your very existence as a going concern is at stake when you realize how fast you could burn through cash just from fixed overhead.

Q: What was demand like for you during the lockdown? How much did you shift to retail, packaging and online sales?

A: We were fortunate to have a new canning line running in January 2020 to complement our existing bottling line. So when March lockdown started, we were able to quickly pivot to selling more packaged beer sales in our tasting room store, and to wholesale LRS accounts to try makeup for zero keg sales and no sit-down tasting room business. We had always mused about setting up an e-commerce platform, and covid was the catalyst to force us into action. We were able to get local home delivery running using a just in time pizza delivery model which was fun but intense. Despite all that frenzied pivoting, our revenues from March to June (already a historically slow, shoulder month period for us) were still down ~40 percent compared to last year. Right now the store is accounting for 75 percent of our retail sales with the rest coming from pipeline sales on the patio.

Q: How much of your staffing have you been able to retain?

A: Most staff turnover we experienced was seasonal in the tasting room which we expected. We ended up hiring five new staff to be able to re-open as we were too under-staffed otherwise.

Q: How have things gone with reopening? What was the most inconvenient aspect?

A: Our interior tasting room remains closed for seating, and our patio is working well notwithstanding the unsettled weather. On one of our best sales days, it drizzled for 6 hours but customers were just stoic about it – they planted themselves at a table and persevered. Must have been some cabin-fever being vented there. I suppose the most inconvenient aspect was scrambling to acquire PPE, sanitizer, and plexiglass for reopening.

Q: Many tasting rooms around BC are filling up again, and tourism is back in certain parts of the province, like South Okanagan. How is traffic for you?

A: Normally we’d have a lot of international visitors visiting the national parks by now, so that has entirely disappeared, but we’ve noticed Alberta traffic picking up for us.

Q: What’s your policy around growlers and refills? Any other noteworthy adjustments you’ve had to make?

A: We have suspended all growler fills, even for new growlers, mainly due to logistics. For everyone’s safety, we need three staff assigned to compartmentalized jobs: one team member pours beers and runs our tasting room store, another greets customers and serves beer on the patio, and the third sanitizes surfaces and busses dirty glassware.  Growler filling is labour intensive, and to have one more staff on shift just isn’t feasible, so something had to give.

Q: Are you waiting on or affected by any legislation? What do you think the province or your municipal government should be doing next?

A: The BC government stepped up big time with the school tax reduction for property taxes. That was meaningful for us, and we really appreciate it. We’ve been trying for years to convince our municipal government to reduce the light industrial property tax rate, perhaps to harmonize with a much lower local business tax rate, but so far no traction, even with a crisis like covid happening.

In the tasting room

BREWING UP NEW MEMORIES IN THE EAST KOOTENAYS