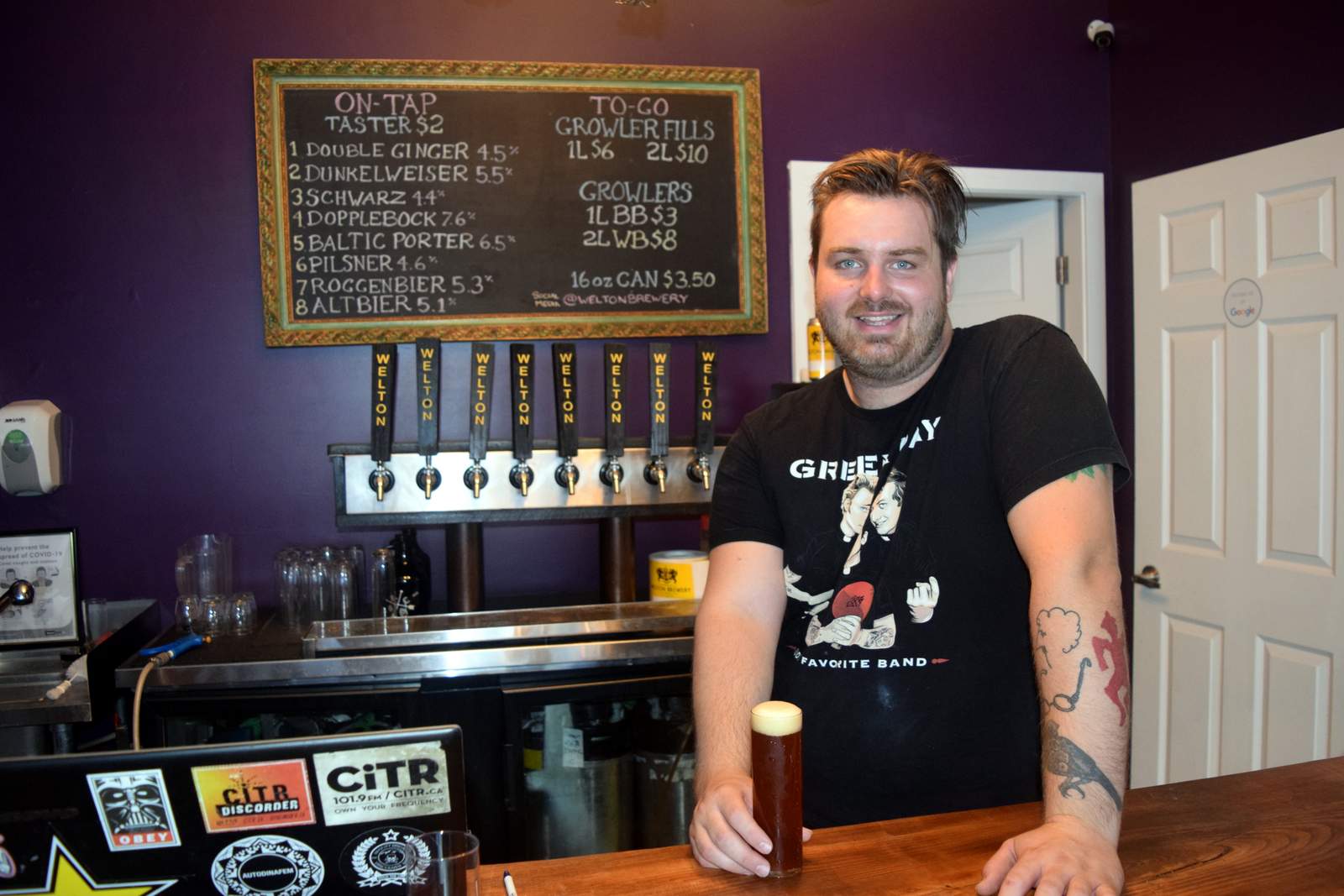 A few months back, What’s Brewing reported that Kelowna’s Boundary Brewing had closed. They made great beer and had a loyal following. but the production system and business model weren’t sustainable. It’s a sad day when any brewery closes, but a second act was about to begin. Welton Brewery poured their first newly-brewed beers in the tasting room during the first week of August, beginning with the Blacon Brown Ale and the Guilden Sutton Golden Ale.

Recently, I spoke to owner Simon Welton, who explained:

I moved to Kelowna 15 years ago with my family and finished high school here before attending UBC in Vancouver. I was lucky enough to be immersed in both the BC and Ontario beer scenes after I moved to Toronto and fell in love with craft beer. I started getting interested in brewing at the end of university by watching home brewing videos, and my interest blossomed from there. Upon deciding I wanted to do it professionally, I considered where the best place to do it was, and the answer was obvious: Kelowna has a brewery scene that is still in its infancy compared to Vancouver and Toronto, with an influx of younger people and the potential to become the next brewery hotspot of BC.

Like many ex-pat Brits craving a taste of home (yours truly firmly included), Simon thought about his past and wanted to bring it to BC’s future:

I’ve noticed for a while there was a gap in the market in BC for English ales as I remember them when visiting home over the years. You do get some English ale here, but the ones I’ve tried didn’t do justice to the styles I remember drinking in England. We really look carefully at mash temperatures, water profiles, and ingredients to emulate English ale accurately.

I’m proud to share my heritage in my new home. Our crest is based on that of the city of Chester, the city I grew up in. It is particularly fitting as there is wheat in the crest. We are naming the majority of our beers after places important to me growing up in the UK. Guilden Sutton, Blacon, and Rhyl are all places with important connections to my childhood. However, we are using the modern hop varieties such as Citra and Mosaic, which I think adds a unique dynamic to our product versus the traditional English brands. We will also attempt to revitalize some heritage styles, such as a spontaneously fermented West Country white beer which dates back to the Middle Ages. We will eventually be recreating some old ales and some other historical beers.

Simon is opening a restaurant location, the Welton Arms, in the heart of Kelowna’s North Side brewery district later this year (hopefully late November). It will serve fish and chips as well as a variety of other classic UK pub dishes. He says it will have an English pub aesthetic with a few modern touches.

I asked him why, with big plans for a city centre brewpub, he changed gears and took over the Boundary space?

I started speaking with Olly at Boundary Brewing in late February, after a friend mentioned they were interested in selling. At first it seemed an odd idea, with a place already picked out downtown and plans to build a brewery there; I’d even submitted liquor permits! Then I thought more about the potential down the road to have a dedicated production space, with room to grow, off-site from the restaurant, and it started to make sense.

We have so much room to grow in the brewery location. I ambitiously hope to double our capacity within two years and spread the reach of our brand beyond the Okanagan. For now though, we have plenty of work to do in Kelowna.

Great to see Kelowna giving Penticton a run for its money as the interior beer Nirvana, and I for one am looking forward to trying some of their beers later this year when I visit the Okanagan.

Taken during What’s Brewing’s visit to Kelowna in July 2020.