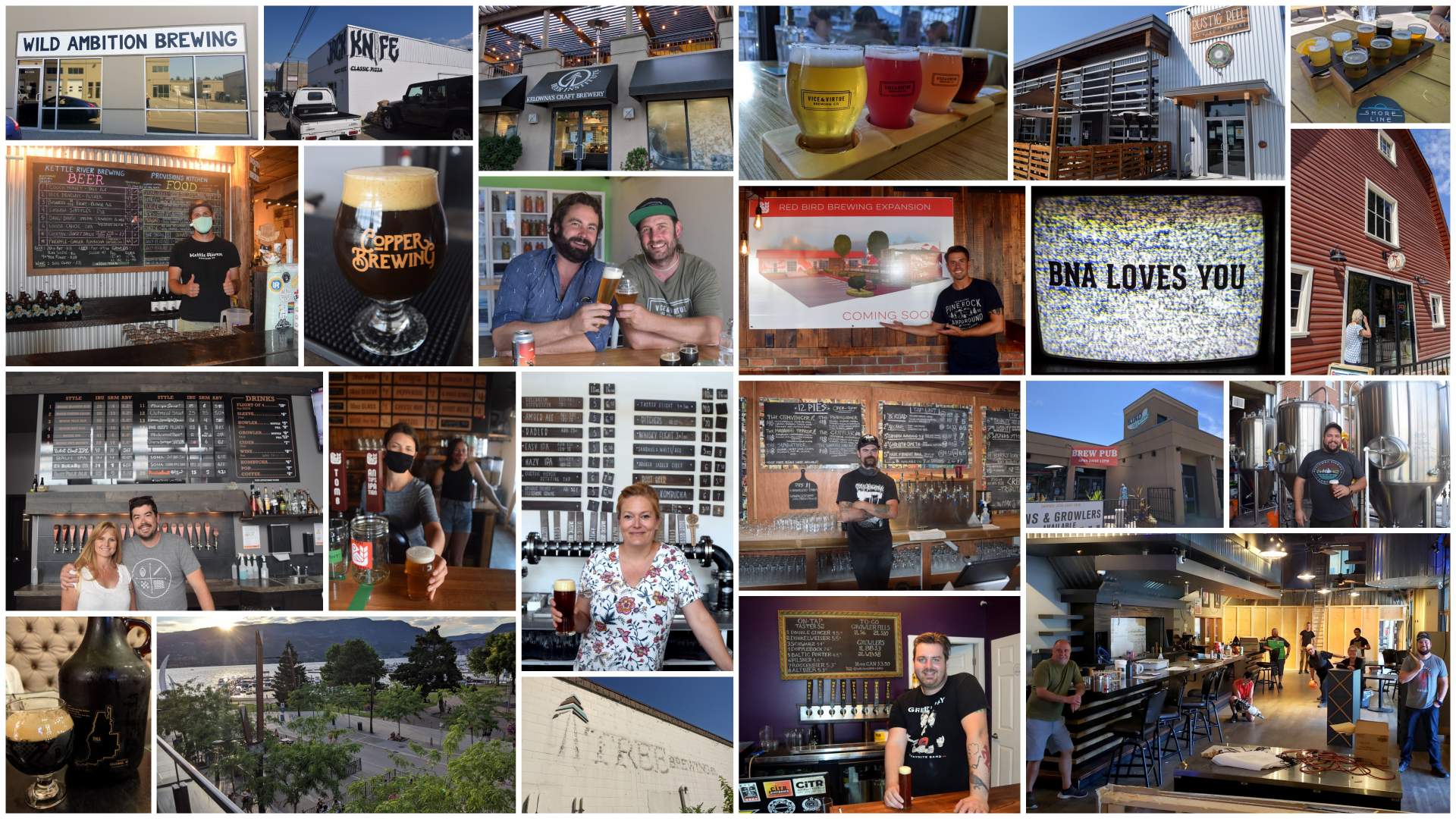 As has been widely reported, too many people celebrated Canada Day together in Kelowna this year. The ensuing viral outbreak and bad publicity caused tourism to drop appreciably in late July, to the detriment of the innocent businesses there. Recently, What’s Brewing headed to the Okanagan to check in on the breweries, whose traffic was affected by this.

What did we find? There was no reason to stay away from Kelowna breweries. They are fully up to speed and handling COVID measures well. If you’re on the fence about a BC beer staycation in the Okanagan, you can stop worrying and start packing.

Following the last major Canadian census, Kelowna was ranked the fastest-growing metro area in Canada. After years of playing second fiddle to smaller Okanagan cousin Penticton, Kelowna’s beer scene has exploded in recent years and continues to grow. With 15 breweries (and at least 3 more in the works) Kelowna can now at least start to make a claim for beer centre of the Okanagan.

The centre of Kelowna is replete with shops, restaurants and entertainment, even in these unusual times. You’ll want to grab a hotel room downtown, and your city tour will start amid a great food & beverage scene. We picked the Royal Anne Hotel, which was fantastic and decent value. Also recommended is Hotel Zed. There are seven breweries within walking distance of this area, so it’s the place to be when exploring the beer scene.

Here you’ll find uber-beer bar CRAFT Beer Market, a great supporter of the BC craft beer scene. What’s Brewing has been pleased to help support their Vancouver location and its beer events in past years. There’s a great view from their rooftop patio, which is all the more reason to get to Kelowna while the weather’s good. Or stop in at the Curious Artistry & Alchemy Café for lunch to get fuelled up before hoofing it to the brewery cluster. Your first stop is just a few minutes away. 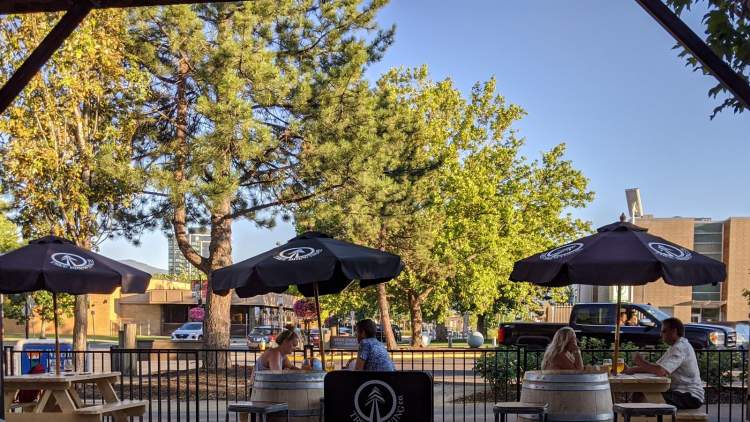 In 2016, we visited the Tree Brewing Beer Institute along the beautiful, bustling boardwalk located along Kelowna’s Water­front Park. No, it’s not an institute of any kind, and now it’s no longer branded as Tree either.

Tree Brewing was Kelowna’s original microbrewery and its largest brewer by a long shot, but in 2018 it was absorbed into the Big Rock family. The newly-renamed Kelowna Beer Institute is a standalone operation spearheaded by Tree’s former longtime brewmaster Dave Gokiert, who was empow­ered with the license to experiment when the Institute was spun off in 2014.

This is an awesome space with a light menu special­izing in spent-grain pizza. You can really enjoy a beer in the relaxed atmosphere of this great two-floor room and patio near the centre of the city. 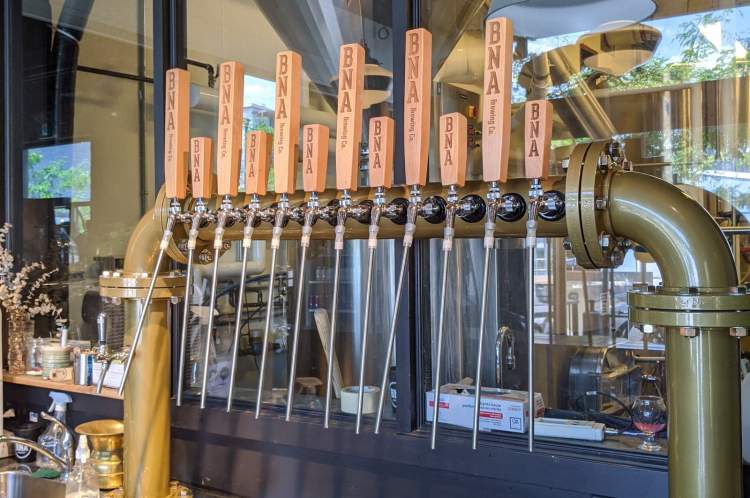 BNA Brewing & Eatery is two operations: busy brewery, next door to a massive two-floor restaurant with its own entrance and opening hours. Thus, your tour will need to involve BNA twice: have drinks in the lounge on the way to your North End crawl, then dine in the Eatery on the way back.

BNA is a first-rate brewery; in our first visit in 2016 we had one of our favourite beers of the year in their flagship Earl Pale Ale [as in Earl Grey tea]. This time we were just as lucky, as we had a good dinner in the Eatery and scored some of their Tennessee barrel-aged stout to take away.

We recently interviewed BNA Brewing’s Marketing Director Jill Jarrett about how things went during the COVID lockdown. Check out the full story here.

With five breweries within essentially a one-block radius, Kelowna’s North End is the new BC brewery cluster to rival Port Moody Brewer’s Row. As with Port Moody, two of them are next door neighbours, and the rest are a one minute crawl each. And that’s if you’re actually crawling. 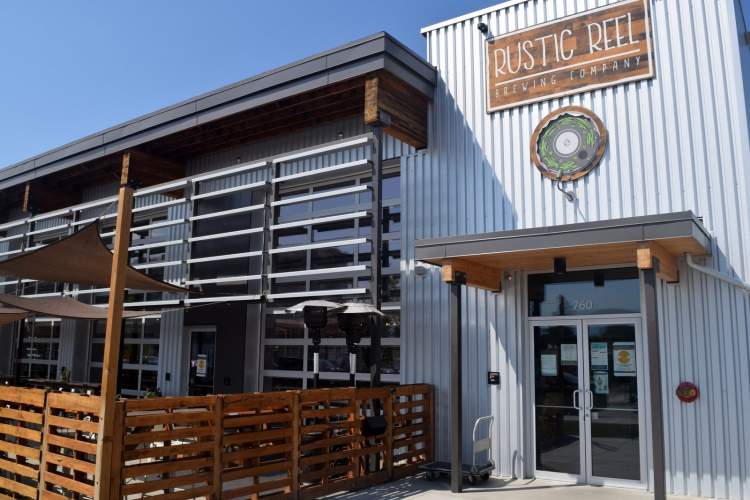 The first stop on your North End tour is Rustic Reel Brewing. Located just a short walk from BNA, this is a must-see for the beer enthusiast. Owner Susi Foerg has put her heart and soul (and love of beer) into this place. She wanted to create a place where women felt comfortable, and she certainly succeeded. The décor is a combination of modern and “rustic cottage”, with potted plants and fresh flowers placed strategically throughout. There is a small, revolving menu, and the beers are clean and solid. Especially recommended were the Amber Ale and the Rosenheim Hefeweizen.

COVID-19 hit Rustic Reel hard. Susi’s brewer had to go home to his family in the U.S., which meant that she had to personally take over all brewing operations for a time. Before COVID, the majority of her revenue was walk-ins: people coming in and staying for a beer or two. When the virus hit Susi had to pivot quickly to packaging, which she wasn’t doing prior.

In the weeks since reopening, business had been increasing until Kelowna’s outbreak at the beginning of July. Since then, business has been slow. Susi notes with chagrin that a brewery is one of the safest public places you can go because of all the protocols they have to follow, and we agree. We strongly recommend a visit to rustic Reel. 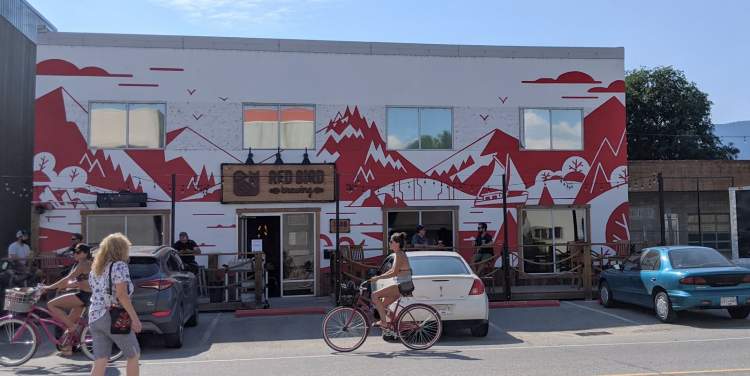 Red Bird Brewing is a small brewery with big ambitions. This popular brewery is in a small building with a limited capacity brewing system. As a result, they currently need to contract brew most of their beer. They have a big patio, however, and it was full of happy beer-drinkers at the time of our visit. The patio is dog-friendly and they have a limited menu as well.

If you visit on a weekend, you will see the expanded patio where they pull their fence across the adjacent parking lot and put out a bunch more tables to accommodate more people.  Owner Adam is working on an expansion of the brewery and has bought the building next door for that purpose. Adam’s vision for the brewery includes having a concert series much like that at Vancouver’s Red Truck Beer Truck Stop. They are currently going through the long approval process, so best wishes to them as they move forward!

Vice & Virtue Brewing might be the home of Kelowna’s first popular kettle sour. In fact, their Love Potion Raspberry Berliner Vice has become their flagship beer, an 8:1 seller over all their other amazing brews.

Vice & Virtue makes a large number of different beers on their 10-barrel system, encompassing the regular styles you would want to see in a brewery, although with a bit of a twist. Brewer James Windsor takes great pride in his beer and enjoys spending time tweaking his recipes with two goals: first, to not make exactly the same beer as everyone else and, second, to “dry out” the beers a bit to get away from the sweetness (to cut down on that hangover).

Owner Matt Jewell has a vision to make Kelowna a great beer town. He is interested in bringing more people into the beer scene and endeavours to have a wide range of tasty beers to entice even those who might think they do not like beer to come in and enjoy something they make. Matt says “Regular people should have access to nice things”. Vice and Virtue is the embodiment of that philosophy.

When we first visited Kettle River Brewing in 2016, around the corner from the monolithic Tree brewery, Kelowna’s then-newest and tiniest brewery was in sharp contrast with its largest. Since then Tree is gone and Kettle River has grown into a community hub.

Kettle River now has a large, wheelchair-accessible patio with social distancing measures built in. The place was buzzing when we showed up for a couple of tasty late night brews. Great hospitality matched the great beers we sampled.

On the topic of COVID compliance, Kettle River got full marks for keeping those masks on at all times serving guests. So did many others around town.

All breweries have their own personalities, and Jackknife Brewing is like no other. Set in a small building next to Kettle River, it has an alternative/metal kind of vibe. Owner/brewer Brad Tomlinson, founding brewer at Kettle River, went out on his own by opening up shop next door.

Brad is an experimental kind of guy, and makes unfiltered, experimental kinds of beers. At the time of our visit, there were 7 beers on tap, all of them brewed with kveik yeast. The unfiltered beers are all very tasty, and a bit unusual, but without being over the top or inaccessible for the average beer drinker. A word of advice: go hungry because you will want to have one of their incredible pizzas.

That’s already a lot of breweries, but more are on the way. By next year your North End tour might include Unleashed Brewing and Starkhund Brewery. Stay tuned to our BC Brewery Map for changes.

In Part II of this story, we complete the tour of Kelowna by bus and car. We’ll take you on a Northeast Kelowna road trip to Copper Brewing, Freddy’s Brewpub, Welton Brewery, Wild Ambition and the Kelowna Brewing Co. at the KBC Public House by UBC Okanagan. Then you’ll learn about the Lakeshore tour, including Barn Owl Brewing, Shore Line Brewing and the Mission Tap House. On the West shore, we’ll check out Kind Brewing and look for Lakesider Brewing.

Until then, check out our 2016 Kelowna travelogue, and start making plans! Visit Kelowna Ale Trail for more.