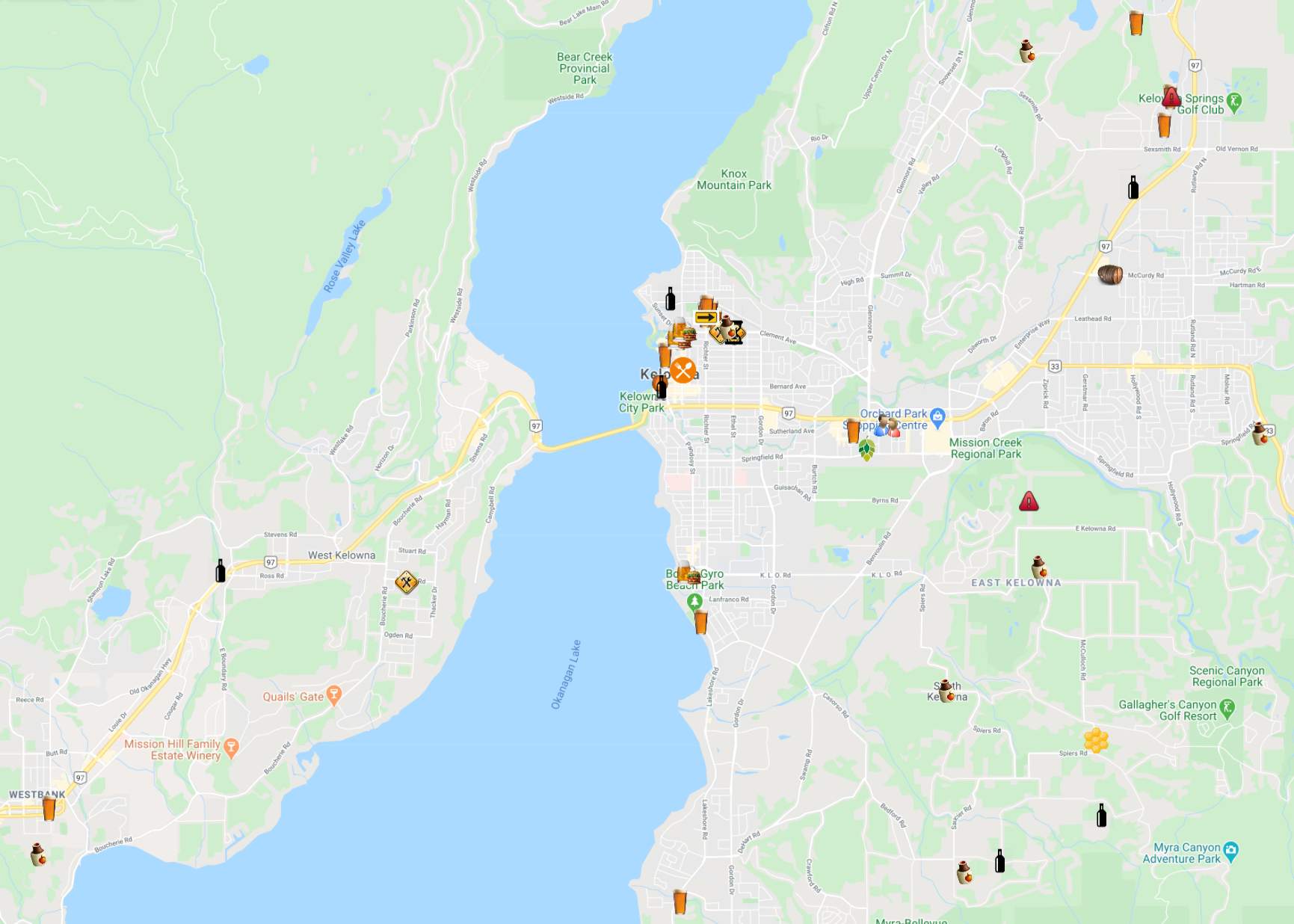 Above: the beer, cider and craft distilling scene in and around Kelowna. From www.whatsbrewing.ca/map

Recently, What’s Brewing headed to the Okanagan to see how the breweries were doing. Despite reports of people pouring into the cities there for “BC staycations”, we found that the backlash of increased COVID cases is definitely having an effect on tourism. The question was: is it safe to go to a brewery in Kelowna or Penticton?

In Part I of this beer travel guide, we completed our walking tour of inner Kelowna. It began in the Downtown & Cultural District, with its fenced-off entertainment area, shops and restaurants—some of which had a distinct craft focus. After stopping at Kelowna Beer Institute and BNA Brewing, we made it over to the North End, which is Kelowna’s answer to Port Moody’s ‘Brewers Row’. There, we found Rustic Reel, Red Bird, Vice and Virtue, Kettle River and Jackknife Brewing, all within a two-block range. (Note: Penticton may have its own version soon too, with plans for five downtown breweries in easy walking distance by next year.)

As BC’s third-largest metro area, Kelowna is more than just the original inner town. The surroundings play host to a couple of other brewery clusters that are more than worth seeking out.

For this busy day with five breweries you’ll need a designated driver. Fortunately, ride-sharing just came to Kelowna this summer in the form of Lucky To Go, one of BC’s newest independent ride-hailing operations.

Once you’ve got your wheels organized, your first stop is about ten minutes Eastbound on Hwy 97.

What do you get when a home-brewing engineer and a wine-industry businesswoman happen to meet? You get Copper Brewing Co., a large, open, inviting taproom in the Landmark neighbourhood of Kelowna. Opened September 2019 by Sean White and Darla Ariss, Copper has an extensive, ever-changing list of solid, tasty beers. They’re made by Richard Fukumoto, a young, energetic brewer who came from Labatt-owned giants Mill Street and Stanley Park Brewing. Copper is an inclusive establishment, welcoming families with kids (Nintendo gaming systems in tasting room booths!) and dogs on the patio.

Freddy’s is Kelowna’s original brewpub and, since the demise of Tree Brewing, the city’s longest-running brewery, period. Debuting in 2000 as Big River Brewing, then known as Mill Creek Brewery, the location now beloved as Freddy’s Brewpub is annexed to the McCurdy Bowling Centre. Lower Mainland readers will understand that concept because the same exists in Richmond, where one of the other original Big River locations became what is Monkey 9 Brewing today.

This summer and early fall, Freddy’s underwent a major renovation; see our separate feature on that.

Welton Brewery is the brainchild of Simon Welton, a British expat whose goal is to bring a little bit of England to Kelowna. As Adam Chatburn details in his column this issue, Simon was in the process of building an English-style brewpub downtown when Kelowna’s Boundary Brewing location became available. Simon and his brewer, Paul, are busy moving equipment around and brewing their beer, which officially went on tap when Guilden Sutton Golden Ale debuted during the second week of August. See coverage in Canadian Beer News. 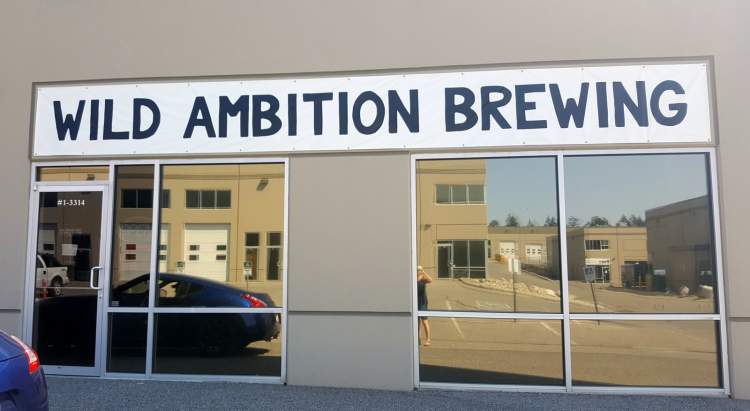 Save the rideshare or cab fare! For the next stop, you can actually walk, because the unique Wild Ambition Brewing is only two industrial park blocks away from Welton as the crow flies (although there’s a fence in the way, so flying would actually help in this case).

Sadly, Wild Ambition was on very limited hours this summer, opening only on Fridays for beer pickup. Hopefully by the time you make it to Kelowna that will have changed, but either way you can still get their noteworthy beers (think: ‘wild’, ie mixed fermentation brews) with a little planning.

You’ll find KBC Public House on a hill near Kelowna’s UBC campus. This spacious brewpub boasts an impressive wall of windows overlooking the stunning landscape of the surrounding valley.

The pub opened in June of 2019, then began brewing their own beer as Kelowna Brewing Co. in December. Brewer Josh Wyatt, formerly of the currently-defunct Boundary Brewing, is busy making a few mainstays and some rotating seasonals, including some very good fruit sours! For a new brewery, it’s already turning out some nice beers.

The next day of touring is best handled using a novel travel method: bus. Be a responsible drinker and grab a daypass from Kelowna Regional Transit System for a bargain $5. Then you’re set to ride from downtown along the East shore to reach three of our beer targets.

Your public limo from downtown is the No. 1 Bus. No, there is no bus #2 involved; if you’re doing this on a weekday, you only need one bus. Ride it all the way south to the end of the line, and you’re right by Barn Owl Brewing. 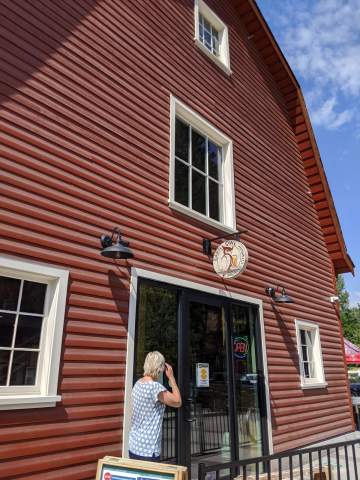 Barn Owl is an intimate, homey little brewery inside an actual heritage barn. Surprisingly for such a small brewery, they have 15 taps of their own beers. If it’s a sunny day, you’ll love the small patios front and back of the barn. There’s a bakery next door with lunch bites if you’re peckish. 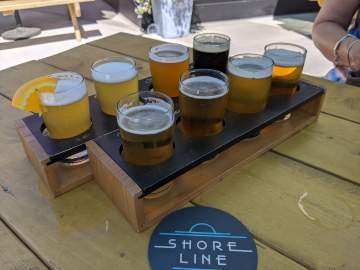 After a couple of hours there, hop back on that same bus back north to Shore Line Brewing, which just opened in June. Their large taproom and giant patio are located across from Boyce Gyro Park, home to one of Kelowna’s most popular Okanagan Lake beaches. There’s a full kitchen and 8 beers on tap.

Your next destination is either a ten-minute walk or, if you time it right and hop back on that same bus, one quick stop northbound. There you’ll find the Mission Tap House, a solid BC craft beer supporter. After a day of drinking in the sun, you’ve earned a good dinner featuring some great beers from around the province.

Alternatively, you can do the route in the other order, especially if you’re ready for a big lunch to get the drinking started off right. Just be aware that Barn Owl doesn’t have dinner options (although DunnEnzies Pizza Mission is close by). Either way, when your crawl is complete, just whip out your daypass and ride that same government limo back downtown. 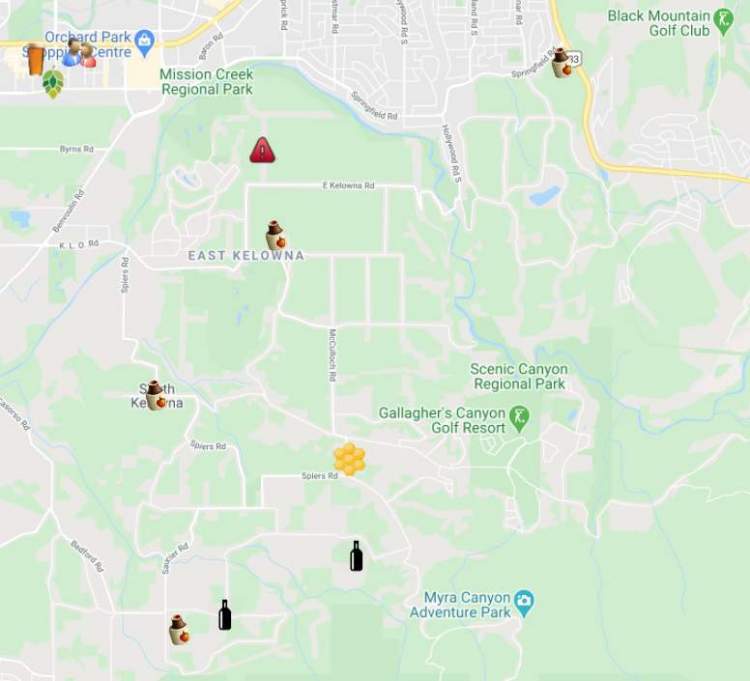 If you’re a craft cider fan (and if you’re not, maybe you haven’t tried enough) then you really shouldn’t go to the Okanagan just for beer. Outside of Kelowna, just like the rest of the lake country, you’ll find numerous cideries…but the biggest cluster of them is to the Southeast, where the What’s Brewing map currently tracks four cideries and a meadery in close range.

On your East and South Kelowna tour, be sure to get to Wards Cider. They grow traditional cider apples: tart, with a high natural acidity. The cidery store and tasting bar are a part of The View Winery & Vineyard. Full profile →

Not far away, East Kelowna Cider Co. offer tours of their family farm. Towards Black Mountain, Double Cross Cidery’s tasting room is next door to the Function Junction fruit stand. Then to the south you’ll find meadery Meadow Vista Honey Wines and Soma Craft Cidery, which is right by Forbidden Spirits Distilling…itself not far from Wiseacre Farm Distillery.

While we’re talking about cider, let’s talk about one that’s on the other side of the lake. Truck 59 Ciderhouse is on an orchard just a few minutes outside of Westbank. This smart-looking farm-based tasting house played host to Okanagan Cider Fest during BC Cider Week 2019. 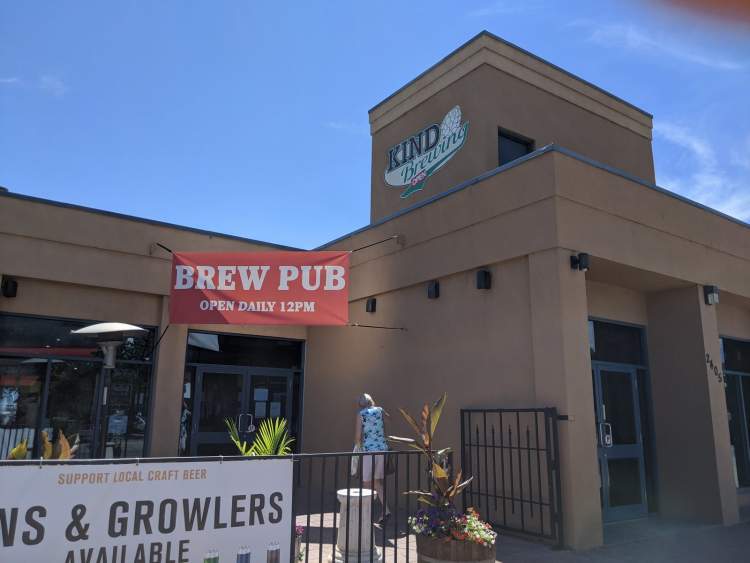 Since it’s on the highway toward the Coast, it’s kind of logical for most beer tourists to treat this as a stop on their way into, or back home from, Kelowna (or when heading south to Penticton for more beer touring). There is a menu but when we stopped by, food wasn’t available, so we brought in our own lunch (Subway is a block away). 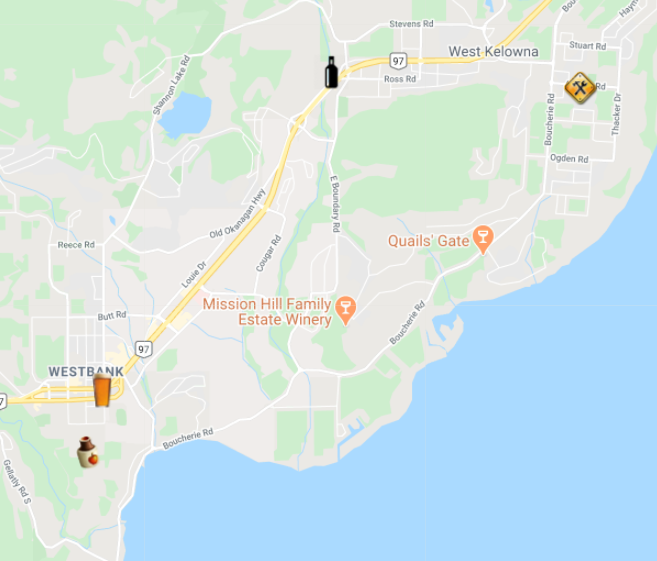 At this point, the West side of Lake Okanagan isn’t populated by breweries the way the Yeast side is. Not that people aren’t trying; you can follow the progress of West Kelowna’s planned Lakesider Brewing on their blog as they post updates. Unfortunately there was nothing consequential to see when we stopped by their outdoor mall-based future home.

Now that you’ve thoroughly investigated Kelowna, you’re ready to move on to Penticton (via Summerland) or Kamloops (via Vernon). Watch this space, and our social media, for more on those!

As stated, the purpose of the tour, aside from meeting people and enjoying great food and craft beer, was to see how Okanagan cities are dealing with the COVID crisis.

What did we find in Kelowna? There was no reason to stay away from the breweries here. They are fully up to speed and handling COVID measures well. So if you’re on the fence about a BC beer staycation in the Okanagan, just use common sense approaches and you can have a safe and enjoyable vacation. Visit Kelowna Ale Trail for more.