Shirley Warne, owner and head brewer at  Angry Hen Brewing in Kaslo, is a true BC brewing legend. What began as a homebrewing hobby for her ended up as a rewarding career in startup and consulting for breweries across Canada. It’s amazing how many brewers of today she trained and supported before she made a home at Angry Hen.

Shirley is right up there with the many men we have honoured in our 30th Anniversary Issue, but has never really been acknowledged for all she has done. This self-drawn diagram should make make her impressive career pretty clear: 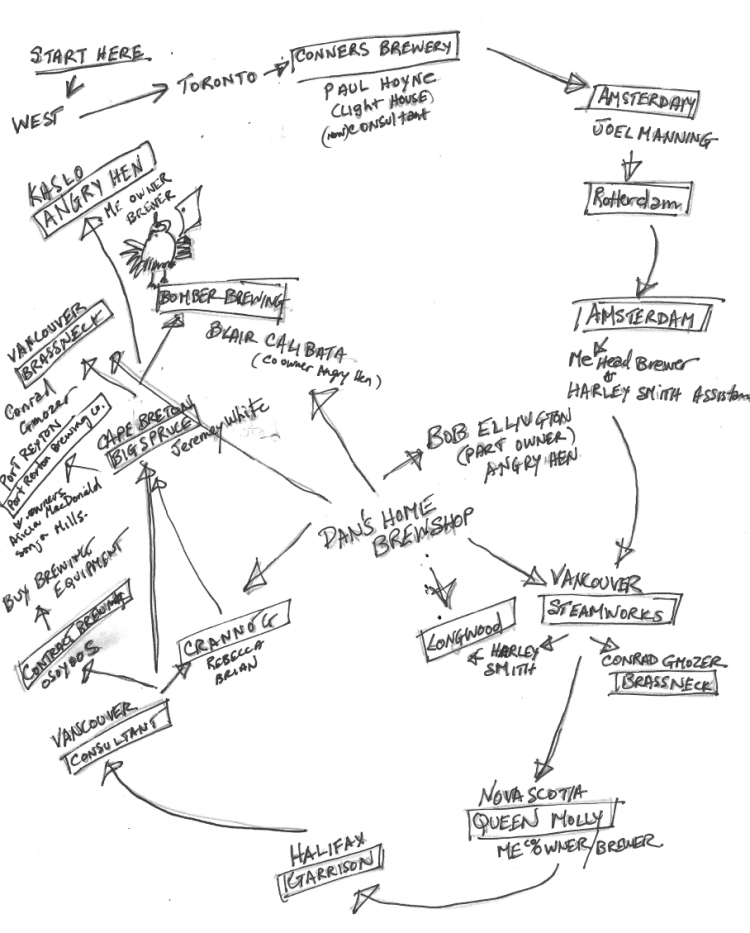 A CONVERSATION WITH SHIRLEY WARNE

I first met Shirley in 2003 at a CAMRA Vancouver cask event. She was ending her time as Steamworks’ first brewer and moving on to another opportunity. Since then, I have seen her working with Crannóg, Bomber, and Brassneck—each time saying, “One of these days I will do a Women of Beer interview with you!” Whan I last saw her with Angry Hen at Penticton Fest of Ale 2019, I said those words again, so I’m thrilled to finally connect and ask her these questions.

Angry Hen Brewing opened in December 2017, as the result of a few years of dreaming, planning and hard work.

WHAT ROLE DID YOU PLAY IN CREATING THIS BREWERY? IT JUST SEEMS SO YOU 😀

My partner and I started talking about opening a brewery in a little town a few years before we settled on Angry Hen. We were fortunate enough to find the perfect property in downtown Kaslo and snapped it up before we had even finished our business plan. Thanks to the support of the town, our family and friends, and the hard work of many small investors we were able to put the Hen together in two years.

Right from the start I knew what kind of a brewery I wanted to work in, so I designed it very carefully. I didn’t want a production brewery. I wanted something small, but not so small that it wouldn’t be profitable. I chose a 7 bbl system and I was lucky enough to get one of the last brewhouses built by Newlands. 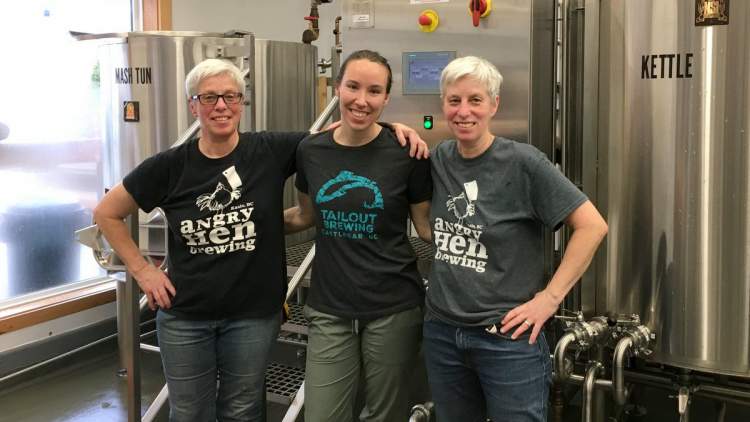 YOU HAVE QUITE THE HISTORY IN THIS INDUSTRY: FROM STEAMWORKS, CRANNOG AND BRASSNECK TO THE PRESENT. HOW DID IT ALL START?

My parents were homebrewers, so I started brewing in my family’s basement. My sister Pat and I carried on the tradition in university…but our beer was pretty bad.

After moving to Toronto in the late 80s, I started my professional career with Conners Brewery. I started in the cellar, and within a year I was working in the brewhouse under Paul Hoyne (later to found Lighthouse Brewing; also brother of Hoyne Brewing‘s Sean Hoyne and now an industry consultant). I didn’t enjoy production brewing, so when I heard there was an opening at the Amsterdam Brew Pub I went in and asked for an interview with Joel Manning. After a bit I asked to taste his beer, and it was so delicious I told him outright that I wanted the job.

I followed Joel to the Rotterdam Brewery and became his lead assistant. A year later I went back to the Amsterdam as Head Brewer. It was there that Harley Smith (now owner/brewer at Longwood Brewery) became my assistant and lifelong friend.

In 1991, Pat and I moved to Vancouver and took up homebrewing again. This time the beer was much better.

YOU THE FIRST BREWER AT STEAMWORKS -HOW DID YOU GET THE JOB?

We would get our brewing supplies from the one-and-only Dan Small of Dan’s Homebrew Shop. When the owners of the upcoming Steamworks Brew Pub asked if he knew any local brewers, he mentioned my name. I went to that interview with a six-pack of homebrew and was hired that day. The place was not quite finished, so I started brewing with a shroud of plastic around the brewhouse. It was ‘steamy’ alright.

I met Conrad Gmoser (now owner/brewer of Brassneck Brewery) on the construction job site. He was working as assistant to the architect and moonlighting as a carpenter. We became friends and within a year he was my assistant brewer. When I left, he took over as Head Brewer! I was totally confident in him; he was already a brilliant brewer by then. 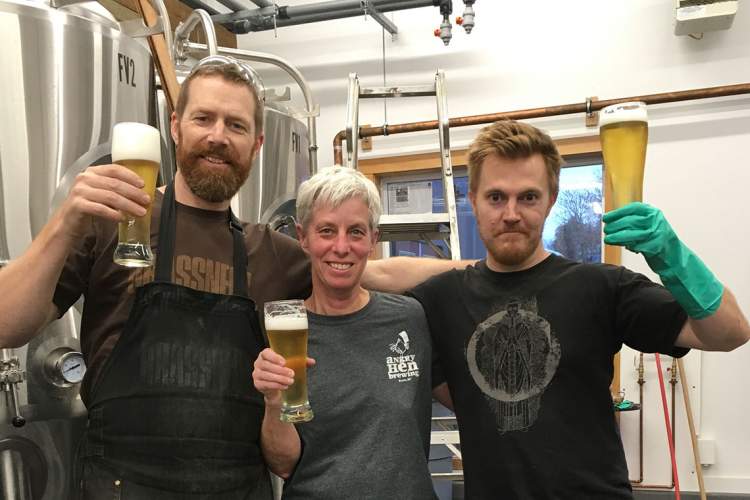 Shirley Warne, centre, with Conrad and Jeff of Brassneck Brewing

In between brewing jobs I acted as a consultant for brewery start-ups, with Crannóg Ales being my first. I had a great time working with Brian MacIsaac and Rebecca Kneen at Crannóg’s Left Fields Farm.

After that, I did some work back in Vancouver with Conrad setting up Brassneck, then with Blair Calibaba to set up Bomber Brewing.

HOW DO YOU FEEL ABOUT BEING A FEMALE OWNER IN THE BREWING INDUSTRY?

It takes a long time and hard work to break into industries dominated by men. You can seem to be accepted, but there is a barrier.

I tried for several years to find partners to set up a brewery on the Coast, but after at least four false starts and some broken promises I gave up and sold my brewhouse equipment. It was disheartening; I knew I had good equipment and could produce top quality beer, but I could not find anyone willing to back me. Potential investors disregarded my expert opinions and often seemed to actively look for reasons to dismiss my knowledge. I thought I had put the required time and work in, but apparently, not so. I realized that my professional experience and expertise was not valued in the same way as a man’s.

At this point, the ownership structure at Angry Hen has evolved to include three women and two men. My partner and I own 52% of the voting shares. We worked very hard to find compatible and supportive co-owners. We also have a great team of women and men working in the brewery and tasting room.

Today, it is often amusing and sometimes annoying how people assume I’m an employee because I’m a woman. The amusing part comes when they realize I’m an owner. 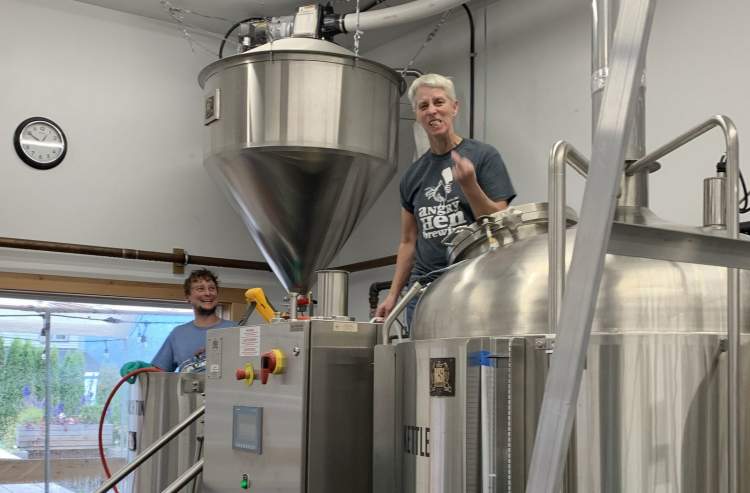 A feisty Shirley in the brewhouse

WHAT DO YOU LOVE ABOUT THE BREWING INDUSTRY?

Brewing really appeals to all my interests. It is science, and it is art. It’s a creative, organic process. I love the traditions, and I love the surprises, as well as the constant innovation in the brewing world. I love brewing and I love drinking beer.

WHAT IS YOUR FAVOURITE BEER OF YOUR BREWERY AND WHY?

My own favorite beer is always my newest creation. Right now [during this early 2020 interview], I am experimenting with Kveik yeast.

My fondest memory of a beer must be Liefmans Goudenband by Madame Rosa Merckx. She is a great story of a woman in brewing.

FAVOURITE FEMALE IN THE INDUSTRY AND WHY?

The woman I admire most in the brewing world is Nancy More. I met her quite recently and have a great respect for her. She is now teaching in Kwantlen Polytechnic University‘s Brewing and Brewery Operations program and creating a brewery culture that includes women as equals.

Also, newer Angry Hen co-owner Cassie Gerretsen needs to be recognized. She has worked with me at the Hen for the last three years and is an absolutely indispensable member. We would be toast without her.

BIGGEST ACHEIVEMENT TO DATE? GOALS FOR YOURSELF?

My goal right now is to find more recognition for Angry Hen and for Kaslo. It’s a beautiful town in an amazing region of BC, and my little brewery is turning out some awesome beer. I wish more people knew about us!