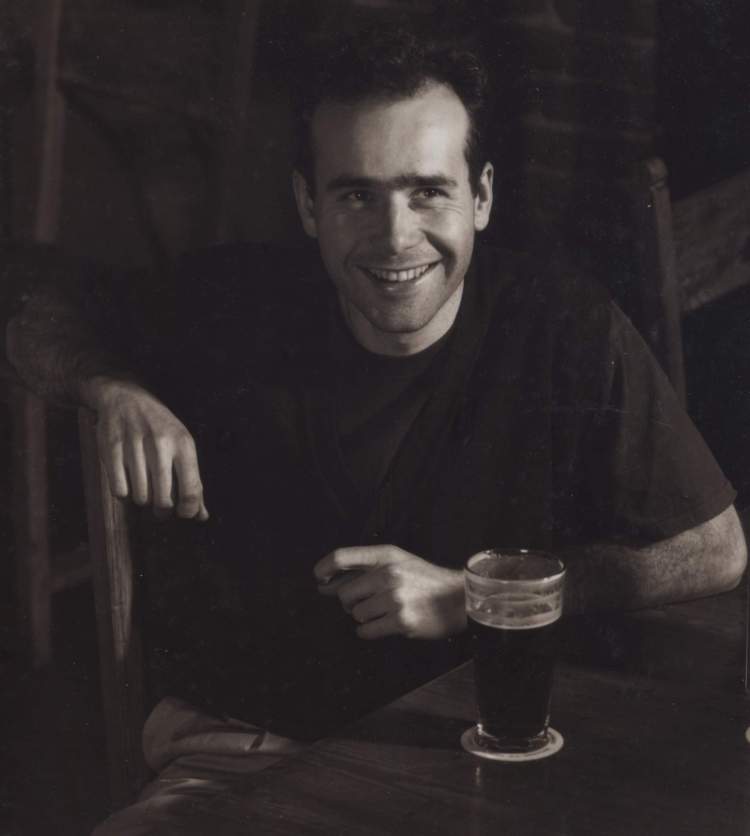 As part of What’s Brewing magazine’s 30th Anniversary celebrations, we continue to spotlight some of BC’s beer pioneers. Last week, we featured Sailor Hagar’s founding brewmaster, Gary Lohin. In this installment of The Class Of ’94, we introduce you to another key brewer from BC’s 1990s scene. But first, we set the scene. 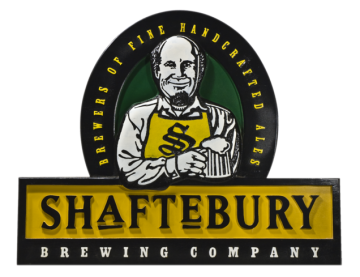 A familiar BC beer brand

Today, East Vancouver boasts one of the densest brewing areas in North America, with surviving pioneering denizens in both the Yeast Van (Storm Brewing) and Brewery Creek (R&B Brewing) neighbourhoods. But neither of those veterans actually arrived first. The trailblazer was Shaftebury Brewing Company, located close to where Parallel 49 Brewing is now, and featuring the Godfather himself: John Mitchell as original lead brewer. [Mind blown, right?]

Shaftebury became the East Side’s first microbrewery back in 1986, enjoying a great run before it succumbed to acquisition in 1999 and settled into life as a corporate sub-brand. People near and far feel their Cream Ale was one of BC’s most influential and best-ever beers.

Now let’s meet our special guest: Iain Hill of Strange Fellows Brewing. Iain worked at Shaftebury back in the day, then moved to Mark James Group’s first brewpub in 1994 and began to push brewing boundaries not long after.

When I worked at Shaftebury Brewing Company in the early 90’s, we had the feeling there were a lot of people who liked our beer and wanted to drink it, but that’s nothing compared with the size of the market in the year 2020. That might be obvious but the point is that our perspective has changed and it’s easy to take for granted the strong interest now in great beer. How could things have changed this much, and what happened that made people want to choose our beer?

I enjoy thinking about stuff like that, but What’s Brewing asked me for some stories from the 1990s. So I sat down with a Talisman West Coast Pale and thought about it. The first isn’t really about brewing but it did happen at the end of a late-night brew in a bad area of town so I’m going to share it.

Yeast Van, then and now 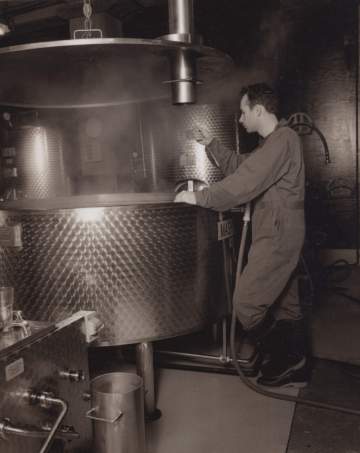 Iain Hill in the brewhouse at Yaletown, 1996.
Photo: John Gaucher

The neighbourhoods where Vancouver’s small breweries grew up have changed over the past couple of decades, partly because of the people that visit those breweries and the culture that has arisen around them.

In the 1990s, there were a lot of sketchy people around Shaftebury’s 1973 Pandora Street location. Close to midnight on Thanksgiving 1994, I left work after a late brew and headed for the bus stop at Victoria and Hastings. When I arrived, there was a very tall guy there with a big backpack that looked like it might hold everything he owned. Despite my attempts to ignore him, he decided I’d be a great guy to talk to. I reluctantly engaged him and hoped the bus would come sooner than later. Unfortunately, this bus never did come. Eventually the guy pulled a big hunting knife and a can of beans out from his bag. Holding the beans right in front of my face, he started stabbing the can and making growling noises as tomato sauce oozed down his arm.

Guys like that are a bit like bears, and I think most people understand intuitively that your response to their actions should not indicate, too greatly, your desire to get away—despite that being your overwhelming desire. Slowly, I started to back away down the hill, but like a hungry bear who was tired of a vegetarian diet of canned beans he descended after me. I subtly sped up my backwards pace and at some point, he slowed and the distance between us increased. I turned and walked quickly the rest of the way down the hill, my ears attuned to any sudden change in the sounds around me that would indicate his pursuit. He didn’t follow and I got away.

We take for granted now the different and ever-increasing types of beer available. That’s due not just to acceptance of new styles, but also the availability of ingredients, technology, and expertise not handy to small new brewers before. A case in point happened soon after the above episode, after I had managed to get the first brewpub brewing job in Vancouver (Sailor Hagar’s Brewpub opened in North Vancouver around the same time, but Yaletown Brewing was the first in the City of Vancouver). 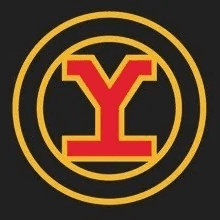 At some point in 1995 I was drinking beer in the brewpub with a bunch of foreign ESL students, one of which turned out to be Michael Leibinger, heir to the Leibinger Brewery in Ravensburg, Germany. This brewery was known for Hefewizen and other classic Bavarian styles. I explained that I wanted to find some Weisse beer yeast to make authentic Hefeweizen. Keep in mind this was before you could easily get it from any yeast lab in the US.

Michael arranged for a friend to bring a mother culture over from Germany. The friend, Henrik Bartle, carried several dodgy-looking, distressed aluminum cylinders full of liquid culture in his carry-on luggage (pre 9/11 of course). I cultured it up, and have been making Hefeweizen in some form ever since.

Henrik has turned out to be a good friend who I’ve visited in Europe with my family. When I met him, he was working as an assessor, auditing wine collections at hotels and restaurant for insurance—basically, being wined and dined at the expense of wine collectors. And here I was, thinking I had a cool job. 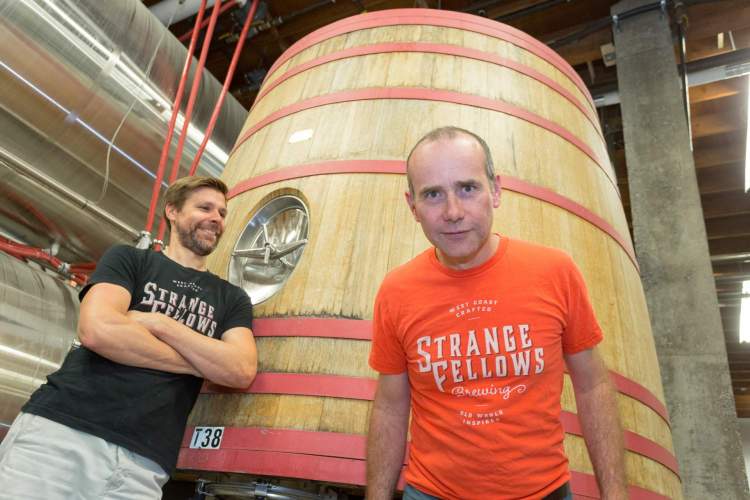 When I think back over what is now 27 years of professional brewing in BC, the thing I’m struck by is the amount of change there has been. In addition to the lack of beer and breweries, it’s easy to forget the scarcity of customers interested and thirsty enough to try interesting beer back then.

We are all lucky to now have such interesting “sour” and barrel aged beers from all sorts of breweries around the new world. It’s another thing that’s easy to take for granted and it represents a great change in our beer market. So my third story has to be something about sour beer.

People who have known me for a while know I’m not keen on the word “sour” in relation to beer even though I find myself using it. It is too literal, and might not be an appealing adjective to would-be drinkers of wild and tart beers. Until the rise of New World beer aficionados, Belgians never referred to Lambic and Oud Bruin beers as sour, the same way we don’t say that most wine is sour (acidic). The beer styles were just known as what they were—Lambic or Oud Bruin. The best examples of which are still not as sour-tasting as many modern and craft sour beers. These day’s its an arms race among new brewers trying to make their beer more sour (or in the late 90’s – more bitter). Eventually we learn what tastes good and dial it back a couple of notches.

Soon after a trip to Belgium in 1996 with Christine, the woman that would become my wife, I was visiting James Walton at Storm Brewing. We had recently become good friends, which was easy with a shared interest in cultured foods and beer. James had brewed a beer that had accidentally become sour due to some fortuitous microbial contamination. I couldn’t believe how much it reminded me of some of those tart beers I’d recently been drinking in Belgium.

Until that point I had not considered it reasonably possible to make a good tart beer without some esoteric and secret knowledge, handed down from father to son. Tasting what would become James’ earliest Lambic was eye-opening and made me want to do whatever I could to make those beers myself. It then took me a few years of determined experimentation to develop my Oud Bruin as a beer I would become known for.

As anyone trying to sell something new and unusual can attest, I needed a place that could recognise and sell that beer for what it was. To generalize, the demographic at Yaletown Brewing was not well suited to that beer. That’s how Nigel Springthorpe of Alibi Room came into my life. One day I received a call from Nigel asking for Oud Bruin in kegs. I knew then there was a chance that Nigel’s clientele would appreciate my tart and complex barrel-aged beer. They did, and the rest is history.

I wonder where we will be in 20 more years. Will current craft beer drinkers be more interested in alcoholic seltzer and THC infusions or will there be a resurgence of interest in English Brown Ale? Whatever it is I hope it’s made by people that care about it and I hope it tastes great.