In this installment of The Class Of ’94, we introduce you to two more legendary brewers from BC’s 1990s scene. Like Gary and Iain, they both started up a celebrated brewery in the year 1994 and began to push the boundaries of BC brewing. As a quartet, they make up a mini Mount Rushmore that Donald Trump would never appreciate.

At the root of the 1980s craft beer revolution was a desire to restore traditional beer styles. Case in point: CAMRA’s stated focus on ‘real ale’, and UK expat John Mitchell’s interest in serving a “proper pint” with help from Frank Appleton. Over at Granville Island Brewing, and especially Okanagan Spring with brewer Stefan Tobler, 1980s brewers would pay respect to German traditions as well. 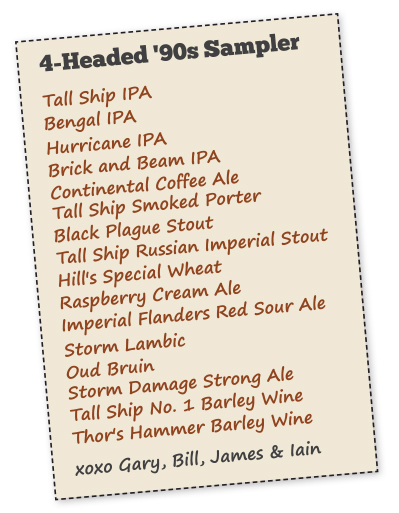 In the 1990s, a new generation who had learned their skills both as homebrewers and on the job at 1980s-era breweries broke away from those traditions. They followed trends coming from the increasingly hops-centric Northwest USA, experimented with stronger UK and Belgian beer styles, and pushed the limits of brewing long before the craft beer audience was ready to support them.

Compare our sampler pack with what most breweries and brewpubs were turning out during this era. Like listening to Hendrix 50 years later, it’s easy to underestimate just how ahead of the curve these beers were in context; many would have been downright commercially unadvisable to brew. However, a key definition of this sampler listing is that these now-celebrated creations were not just obscure, forgotten one-off brewpub experiments.

Certain brewers had the freedom in their workplace to run more adventurous brews on a somewhat regular basis, and they pushed their management, staff and clientele toward accepting new styles. For that reason, most of the examples above were “committed to” (released for sale in packaged or kegged form, or put into recurring taproom rotation) and many are still being made today in the same or reworked form.

Who else is somewhere on this 1990s mountain?

There were other ’90s brewers who could push the envelope, and we’ve provided a starter list in our current magazine. Some may not have had the opportunity to be as widely celebrated as the folks above. Accept the disclaimer that our mountain quartet is limited to a very specific moment in BC beer history, and let’s hear what these brewers can tell us about working in the 1990s.

When Storm Brewing opened in 1994, craft beer was a largely unknown commodity in the restaurant and bar scene across Vancouver.  James Walton—owner, brewer, and character—always had to explain that his beer was unfiltered so it would not be 100% clear.  After a year of taking the product, one of his customers called up and said “We must have given you $10,000 worth of business. You should be able to buy a filter by now.”

Unfortunately, James loved brewing but hated sales and marketing. Fortunately, as he tells us, a friend stepped in to help. This guy was a high-pressure salesman extraordinaire.  He would call and call a prospect until they agreed to meet.  His trick was to pour two beers in front of himself then talk and talk and talk about the beer without giving one to the poor victim.   The prospective customer was too polite to reach across for it. “By the time it was offered, he or she was really dying for that beer so it tasted amazingly good.  Sale closed”, Walton shares.

The story of Bill Herdman, idiosyncratic BC brewer dates back to 1979 in North Vancouver. At that time, 17-year-old Bill had a friend whose father, a banker by day, had a homebrewing hobby by after hours. Bill got his first exposure to the idea of do-it-yourself beer creation when he helped with the bottling. It was just a taste of things to come.

Then there was this other friend. In a story with a few twists, the most singular quirk is Bill’s long-time acquaintance with Gary Lohin, a brewer who needs no introduction to BC beer enthusiasts. Gary was a classmate of Bill’s brother Tom, both a year ahead of Bill at Handsworth Secondary in the upper levels of North Vancouver. They became close enough that when Gary got married the Herdman boys were in the wedding party. From time to time, Gary and Bill would compare notes as homebrewers. Lohin and Herdman’s peculiarly parallel yet juxtaposed careers run as a theme throughout Bill’s story. Full story →

I opened Sailor Hagar’s Brewpub in 1994 with a 10HL Specific Mechanical system. I remember christening the mash tun by turning it in to a hot tub for an evening, complete with scotch and cigars. The brewhouse got so hot in summer that I often brewed in only shorts and gumboots. No shirt! I don’t think that would fly today.

The brewery was in a small stand-alone building separated from the pub [Ed. Note: this puts Hagar’s into the rare ‘Offsite Cottage Brewery’ category, alongside pioneers Horseshoe Bay Brewing and Saanichton’s Prairie Inn]. We were, however, attached by draft lines that ran in a conduit through an underground parade. I’m glad no one ever found out about that! Full story →

Iain Hill: from Shaftebury to Yaletown

When I worked at Shaftebury Brewing Company in the early 90’s, we had the feeling there were a lot of people who liked our beer and wanted to drink it, but that’s nothing compared with the size of the market in the year 2020. That might be obvious but the point is that our perspective has changed and it’s easy to take for granted the strong interest now in great beer. How could things have changed this much, and what happened that made people want to choose our beer?

I enjoy thinking about stuff like that, but What’s Brewing asked me for some stories from the 1990s. So I sat down with a Talisman West Coast Pale and thought about it. The first isn’t really about brewing but it did happen at the end of a late-night brew in a bad area of town so I’m going to share it. Full story →