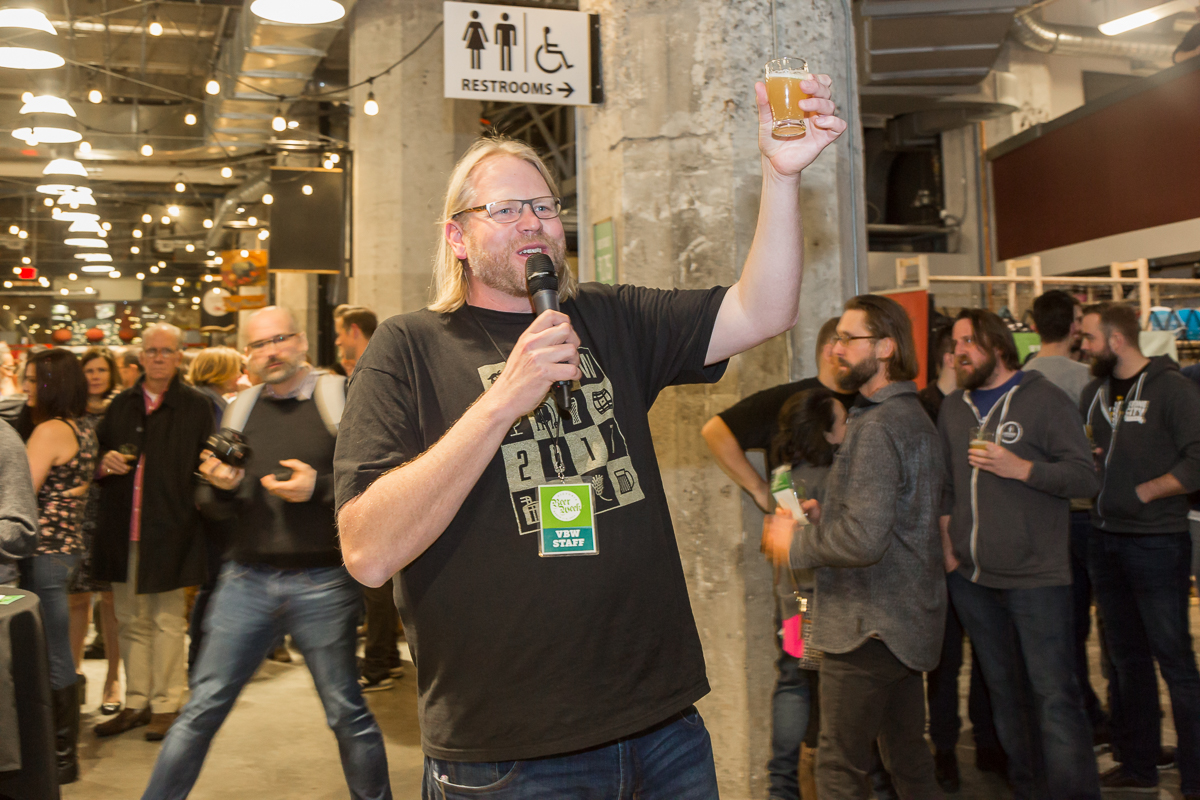 Victoria Beer Week debuted in 2014 as a celebration of modern beer culture in Canada’s original craft beer town. This year’s series of events, scheduled March 6th through 14th, feature the wares of more than 40 BC craft breweries at various locations throughout the city. There are opportunities to learn about beer styles, try various samples and connect with the heroes producing world-class BC beer. See the VBW Schedule for an impressive list of events.

To find out more about what to expect at some of this year’s events, we connected with BC beer writer and longtime VBW team member Joe Wiebe, Beer Director for the organizing group, the Victoria Beer Society.

Q & A WITH JOE WIEBE

Q: In one month, the 7th annual Victoria Beer Week kicks off. Is time flying or what? Tell us a bit about how you think the Week has evolved since Year One.

A: I can still remember the first night back in 2014. Of course, we were all running around for the first hour or so, getting all the attendees checked in and making sure all the beer was flowing properly, but then there came this moment when I was able to stop and catch my breath. I looked at all the people filling the Victoria Public Market, sampling beers, laughing and having fun, and just thought, “We did it!” Every year, on opening night I have a similar moment — it still gives me such a sense of satisfaction.

But I haven’t answered your question. As to how it evolved, it’s been a mixture of “Don’t fix what ain’t broke” in terms of keeping events that do well every year and maybe just fine-tuning them a bit (i.e. Lift Off! and Cask Night), and then coming up with ideas for new events that reflect current trends and new styles. That’s how All About the Wood came about a few years back when I saw how barrel- and foeder-aged beers were starting to show up more and more. This year, we have a new event called Lager Than Life that shows off the wide range of lager styles. When we initially decided to give it a try, we were a little nervous about what the response would be, but we actually had to turn away some breweries that wanted to be involved, and so far ticket sales are doing well, which is really gratifying.

Q: Paul Hadfield of Spinnakers Brewpub is probably BC’s best-known publican, and he’s also considered one of the craft community’s more entertaining and storied speakers. What can guests at the Publican’s Picks dinner expect to hear from their host on Sunday, March 8th?

A: I’m very excited about this Sunday evening dinner with Paul. As you mentioned, he is a very entertaining speaker — every time I get the chance to hear him tell stories about the early days at Spinnakers, I learn something new — and Spinnakers’ chef Ali Ryan is a talented cook, so I’m sure the food will be amazing, too. Paul recently told us he has obtained a short beer documentary from the 1980s that includes footage of Spinnakers and his younger self, which he will be screening as part of the dinner, so I am especially excited to see that!

Q: Stephane Turcotte of île Sauvage Brewing is a very respected brewer of Belgian-influenced styles. On Wednesday, March 11th, for $20, guests will learn about wild yeasts and taste six BC wild-fermented beers. Any idea which other breweries will be featured at Walk On The Wild Side?

A: At this point, it’s too early to tell which beers he will serve, but I will say that Stephane is a fantastic speaker. He is BC’s only Advanced Cicerone®, which means he has a vast knowledge to draw upon, but he doesn’t talk over his audience. I just attended a seminar he gave on Kveik yeast, and based on that alone, I can’t wait to hear what he has to say about wild yeasts.

He is also doing a class on Food and Beer pairing, which is sure to be a big hit. And remember, Île Sauvage Brewing won Rookie Brewery of the Year at the BC Beer Awards, so if folks haven’t already been there, I highly recommend they plan on checking out either during Victoria Beer Week or the next time they’re in Victoria.

Q: European-trained brewer Clay Potter of Moon Under Water hosts a series of educational events at his brewpub year round. But with the involvement of the BrewVic homebrew club, his Homebrewing Workshop on March 8th seems different. Who might enjoy this event?

A: This is an event we’ve done every year since the beginning, although it has bounced around between breweries. It is always one of our first sell-outs, so we know there is a lot of interest in homebrewing here in Victoria. Clay hosted last year and was excited to do it again this year.

The cool thing he initiated last year was that they brewed three versions of the same beer (a Bock) — one in the most basic way using malt extract from a home brew store; an all-grain version on an advanced homebrewing setup that BrewVic brought in; and a full batch on the brewpub’s equipment. This way, attendees of all levels of ability could learn how to try to replicate the commercial brewing process at whatever scale they prefer. Then, a month or so later, the Moon held a beer launch featuring all three beers so you could compare the results. As expected, the malt extract version tasted like, well, home brew, while the all-grain batch was much better, and the full brewery batch was excellent.

Q: VBW has featured many memorable parties, but one key aspect of each year’s Week is enjoyable education via Beer School. The late beer historian Greg Evans, probably Beer School’s most revered presenter, was one of the more cherished people in the Victoria beer community. Tell us what the Greg Evans Memorial Beer Walk on Saturday, March 7th means to you.

A: Greg Evans was a good friend of mine so when he died late in 2018, I was, naturally, devastated. I worked with his family and colleagues to organize a memorial for him at Spinnakers early last year, and was absolutely gratified to see more people jamming the pub than probably were legally allowed. Timing-wise it was too early for us to do anything to honour Greg during VBW 2019, but we definitely knew we wanted to do something this year.

Working together with the folks at CAMRA Victoria, who were able to obtain Greg’s collection of brewery artifacts from his estate, and Chris Adams, who hosts the popular Ghostly Walks tours here in Victoria, we came up with this idea as the perfect way to remember Greg. It’s just too bad that he won’t be there to lead the tour himself!

Q: A lot of the messaging around VBW (and its sister event Great Canadian Beer Festival) is based around membership in the Victoria Beer Society, which presents Victoria Beer Week and provides discounts on certain VBW events. How is membership uptake, and how is the year-round program of VBS events being received?

A: Last year was the first full year for the Victoria Beer Society, and it was a big hit. More than 400 people signed up for memberships in 2019. We’ve just started the membership renewal process and we’re seeing some great pick-up so far. Members get discounts to some Victoria Beer Week events, as well as exclusive access to special Beer School events throughout the year (like the Kveik Yeast class I mentioned earlier), and of course, they also get early access and a discount on tickets to the Great Canadian Beer Festival.

The other thing we are trying to expand in 2020 is the VBS discount program at taphouses and liquor stores that become corporate members themselves. For instance, if you show your VBS card at Refuge Taproom you get 10% off.

Q: The Brewmasters Brunch, to be held Saturday, March 14th, seems to sell out every year. There are 8 brewers slated to share stories at this year’s event, at Swans Hotel & Brewery. Do we know who a few of them might be?

A: We’re waiting for confirmation from some of the breweries that are coming to town. Stay tuned for the announcement on the event page: VBW 2020: Brewmasters Brunch

Q: What’s your favourite event of past years, and what are you looking forward to most this year?

A: Wow, it’s pretty tough to pick a favourite from all the years. All About the Wood is always a highlight for me because of the amazing range of wood-aged beers that breweries bring (readers who attend Farmhouse Fest every summer would definitely enjoy it), but my absolute favourite has to be Hoppy Birthday, which closed out the week two years ago in our fifth anniversary year. It was a very special night: everyone dressed up; the breweries brought some amazing beers; we enjoyed a massive birthday cake shaped like a VBW beer glass; and the eminently talented jazz singer Susannah Adams performed live. It’s a night I’ll remember for a long time.

Or jump directly to an event here: