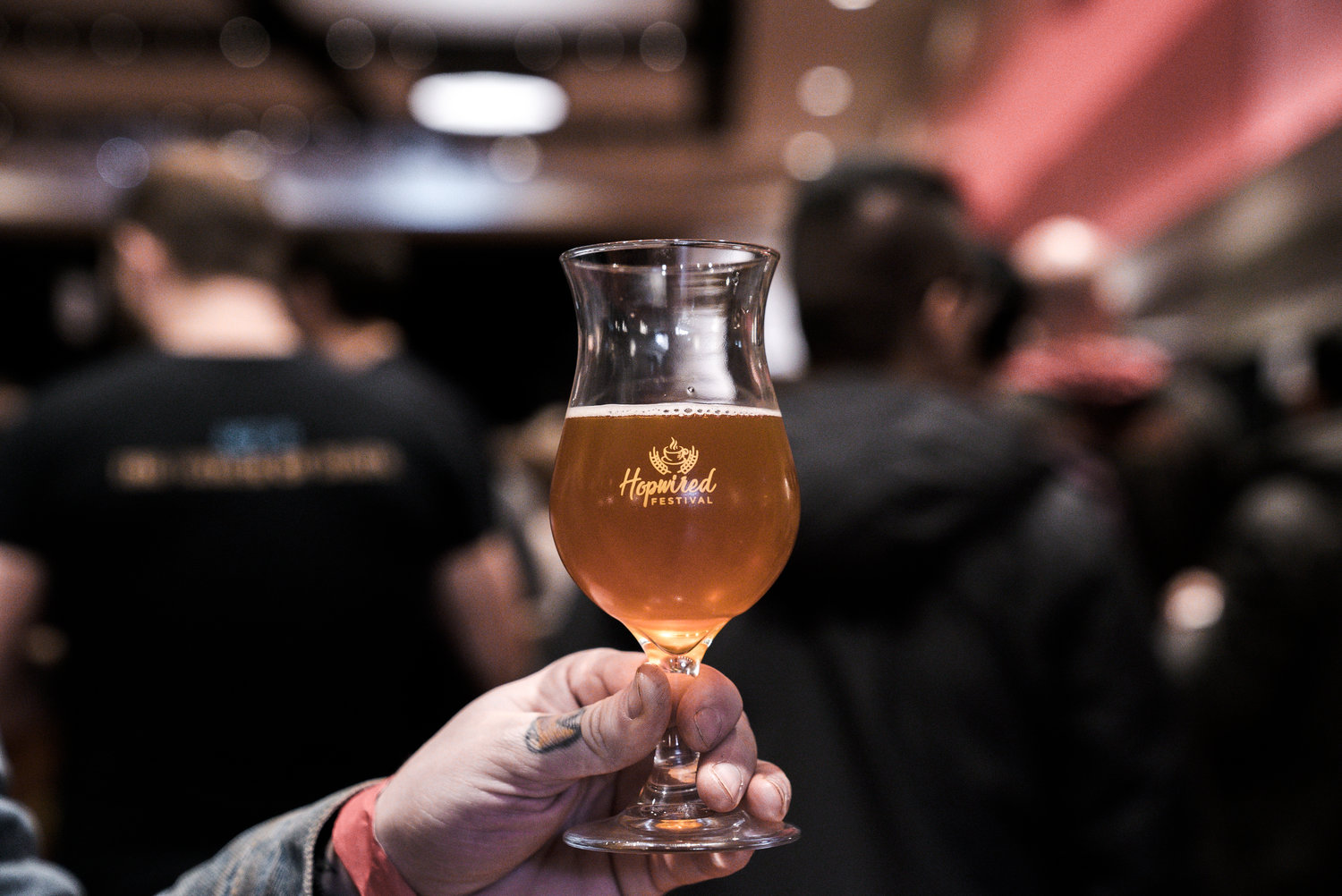 A couple of years ago, one of the more innovative beer events in Canada debuted in the form of Hopwired Festival, billed as The Festival of Craft Beer & Artisan Coffee. This year’s event will be held on Saturday, February 29th, 2020.

Why beer and coffee? For one thing, living in the Pacific Northwest—the home of hops and coffee shops—it’s natural to be exposed to great modern beer trends at the same time as some of the planet’s best-known coffee retailers. It’s certainly fitting that Vancouver is home to the only major beer & coffee festival in Canada.

Not every beer enthusiast is a coffee drinker, but even some of the non-caffeinated will immediately perk up when the flavours of coffee make their way into certain beers. Whether it’s via notes from roasted barley malt, or the use of actual coffee beans during the brew, the aromas and flavours of coffee are well known to complement certain styles of beer (Stout is probably the most prevalent type, but everything including lager is up for infusion). Because Hopwired is produced by people who are fans of some fairly eclectic breweries, the brews to be found annually at this event are some fairly standout examples.

It’s been announced that this third instance of Hopwired will be the final one. If that is the case, then we stand to lose a unique event on BC’s annual beer calendar. If you haven’t been able to make it out to Hopwired before, this is the time. To find out more about what to expect at this final event, we connected with Mike Willis of West Craft Specialty Imports, the organizer of Hopwired Festival.

Q & A WITH MIKE WILLIS OF HOPWIRED

Q: This is the third annual Hopwired Festival. How is planning coming along for this year’s event? Tell us a bit about how things have evolved since Year One.

A:  It’s going great! With the general production of the event, we’ve been feeling very relaxed since the first year. I think the event has become something of a cultural phenomenon, and one that some people consider the symbolic start of the Spring beer festival season.

Year One was about figuring out what we were doing and explaining it to people—it was very hard and cost me about six months of my year. We sold something like 250 tickets. Year Two was a gong show; we didn’t expect to sell 1000 tickets, and our ticket app went down at opening time.

Year Three (this year) is my favourite so far. We’ve tightened up the number of vendors, added more seating and space, and I know what not to do or not do during the event (i.e., not spend my time on frivolous little things).

Last year, we started a beer distribution agency. We brought in some amazing beers from vendors like Ontario’s Nickel Brook Brewing and got a bit carried away. We’ve used the knowledge we’ve acquired to bring in more cool stuff this year, such as a few of our favourite wild ales from Garden Path Fermentation and WIldflower Brewing + Blending, plus a Lager Bar from Bellingham’s Chuckanut Brewery. There’s also a Fruit Beer Fest preview with beers from our friends at Wild Amibition Brewing and Dwinell Country Ales. We’re not losing touch with our focus on coffee collaboration, but we’re keeping people from killing their palates with caffeine.

Q: What can our beer-drinking readers look forward to discovering at Hopwired?

A: Our friends at Brasserie Dieu Du Ciel and Chuckanut Brewery are opening the event together with Aaron from the Cascadian Beer Podcast. I think that having two beer heavyweights in Vancouver for the “History on Tap” panel is just massive.

I think the favourite discovery people will have is the wide array of different coffees used in different styles of beers. Think: a blueberry-forward Ethiopian coffee finding its way into a wheat beer to lend tartness and juice.

This year, Fresh Cup collaborated with Lighthouse Brewing on a very special bourbon coffee addition to their Nightwatch just for Hopwired. That deserves a special mention because it always taps out early, but this year we’ve got 50L of it that isn’t going anywhere else, and I am PUMPED.

The Espresso Bar is always a popular feature. It’s run by our very good friends and presenting partners Espressotec, with a new espresso every 15 minutes during the entire event. I look forward to seeing people’s eyes light up as they discover what their caffeine tolerance is.

We’ve got a coffee brisket sando from our friend Marc at Whiskey Six BBQ that’ll be EXCELLENT.

Our on-site liquor store, by Vessel Liquor, will have a few take-home beers that will never make it to retail—Blind Enthusiasm, Dwinell Country Ales, Wildflower, Nickel Brook and some other goodies.

Q: Coffee geeks and beer geeks overlap, but there are some who are only one or the other. Would you say more people are coming from the coffee side and discovering craft beer, or vice versa?

A:  More people are discovering coffee!  Without exaggeration I had at least a dozen different strangers run up to me at Hopwired last year to tell me that they never thought of coffee this way before. People are finding that they can slowly enjoy a good coffee the same way that they can enjoy their fruited sours.

Hopwired isn’t about lattes or adding cream and sugar to your coffee. (We don’t even provide cream or sugar). We leave the art of latte to our friends at House of Funk Coffee.

Q: There have been beer and coffee festivals in Oregon and Washington, but Hopwired seems to go farther in staging a multi-layered event with presenters and activities. What inspired this ongoing involvement of beer and coffee experts in your program?

A: I want more people to listen to one another and try to collaborate. With the presentations—or Panels, as we call them—I leave it to Aaron Johnson of Cascadian Beer Podcast to host the chat. I think people feel very vulnerable when they speak about how something started, and the struggles and perseverance it takes to reach their goals.

It’s a bit of a deep dive but Hopwired is a personal journey for me. I was at a point in my life at the beginning of planning Hopwired where I was hurt by a toxic part of the industry, so I wanted to connect with other people and prove to myself that “not all people are like that”.

There’s a lot of great and happy people in the industry, but there’s also a lot of “commercial speak”, and I’ve found things to not be super genuine beyond the gloss. So I pursued new dialogues and attempted to fix something that I saw as broken.

Q: We hear that Hopwired Fest won’t be back next year. If this is the last one, what are you looking forward to most at this year’s event?

A: Honestly, every year I love putting up “Coffee Is Not a Flavour Profile” on the projector screens. People probably think whoever is doing that is just nuts (or maybe they’re too busy indulging in the beers and don’t care), but I just look forward to doing that on principle that Hopwired is different. I see a niche crowd come out and always discover something new and I get to be a part of that. It’s just the joy I feel by doing something that is different, and that I always meet someone on the same patch of green grass.

For drinks, I’m looking forward to Running Ground from Dwinell Country Ales. The coffee used in that beer was roasted by a Greek Orthodox priest around Mt. Hood, and the blackberries were handpicked by the family-owned/family-run brewery.

As an alternative to beer, I’m looking forward to what my friend Jordon from Transcend Coffee will serve, and to doing drive-by shots of espresso. We don’t get a break while running Hopwired, so my favourite is a drive-by on the bourbon cold brew from Fresh Cup‘s booth.

Q: After Hopwired, what’s coming down the pipe next?

A: What we do next will be just as much a sensory journey as Hopwired Festival and what Fruit Beer Fest has been. We want to add meaning and not replicate what others are doing. For instance, we just finished a six-week fundraiser out of East Van’s Prototype Coffee. Launching Hill Farmstead Brewery in a coffee shop (with a purpose: to support the food bank) is just weird enough for both us and them.

When we set out with Hopwired, aside from trying to fix what I saw broken, I wanted to learn a way to build the tools to help develop a European drinking culture, where life is slow, beverages are everywhere, and people aren’t triggered to over-drink, which is unhealthy. I want to do something abnormal that adds purpose to people’s lives, even if they choose to not drink what we provide.

Back in November, we were screwed over by the venue for our Wild Night Out event. It cost us a lot of money and has been mentally traumatizing, so that has prevented us from getting it going again. But, just like Hopwired, we’re going to find purpose and scale it up to cover our losses. Our distribution agency has signed Michigan’s Speciation Ales, Vermont’s Hill Farmstead Brewery, Australia’s Wildflower Brewing, Kanata’s Small Pony Barrelworks and the UK’s Cloudwater Brewing, so we’re aiming to use these breweries as part of the next Wild Night Out.

Two event ideas we considered before were taken by someone we trusted, so we’re pretty hush-hush. But there are some insane ideas that we have been stirring up for two to three years. We want to create a more theatrical production of a tasting event, although it’s taking a lot of time.

I want to support the artisanal mindset. We have seen so many festivals that become a “municipal commercial event”, and never an event of cultural significance. Having that model would make me feel like more of a failure than if I lost a few thousand dollars on an event that actually adds meaning. We want to put on events that people can grow with.