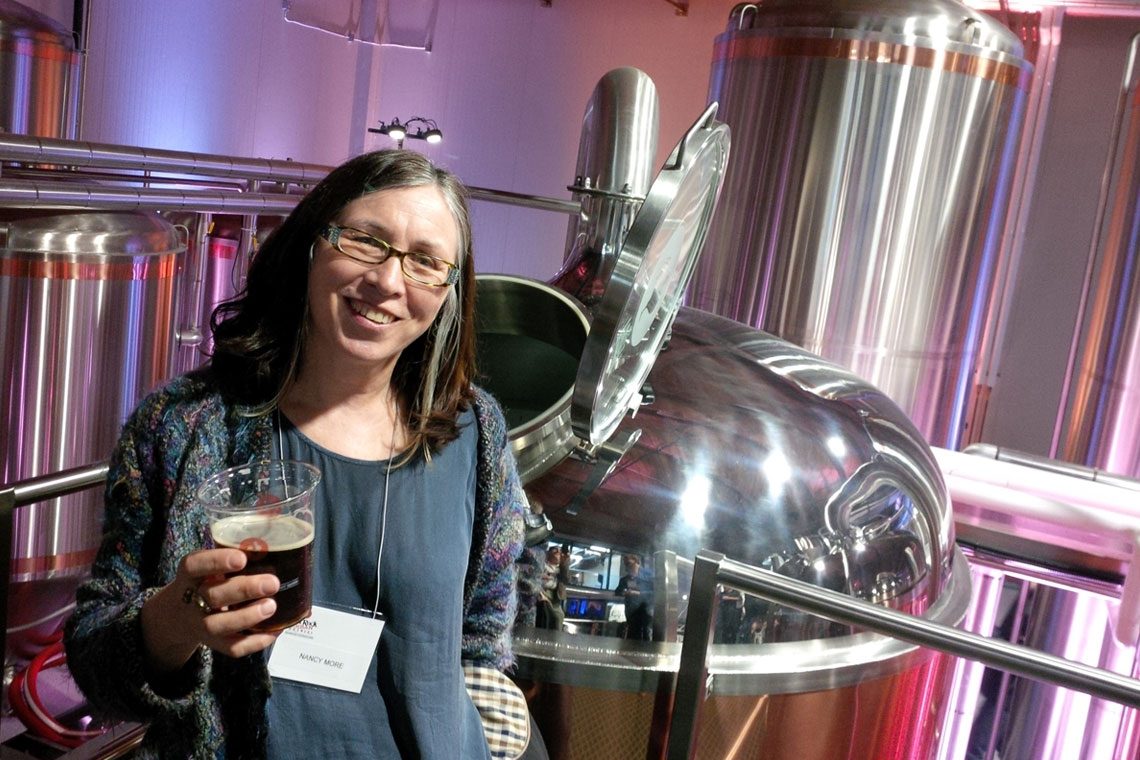 Nancy More is a true legend of the brewing industry, in BC and internationally. She has done a lot for women in the brewing world in her 40 years working with beer, mostly without even trying. In 1985, she was appointed Head Brewmaster at Oland Brewery in Saint John, New Brunswick—the first female head brewer in North America. She has since had stints in Europe, the Ukraine, Russia, and back in BC. She co-founded and teaches in the brewing program at Kwantlen Polytechnic University.

In honour of a landmark anniversary and all her contributions to the industry, the BC Craft Brewers Guild announced a scholarship in her name in October 2019. To complement that honour, Nancy received a Legend award at the 2019 BC Beer Awards.

Nancy will always make time to help anyone who has a question about the industry, or about beer, especially over a beer. You leave the conversation knowing more than you thought there was possibly to know about beer and wanting to know more. I met Nancy a few years back at one of our annual International Women’s Day Pink Boots brew days. She attends as many of these brews as her time allows and brings female students with her. Last year she led a large group of students and many KPU senior faculty members to their first International Women’s Day brew. We hope many more will follow. 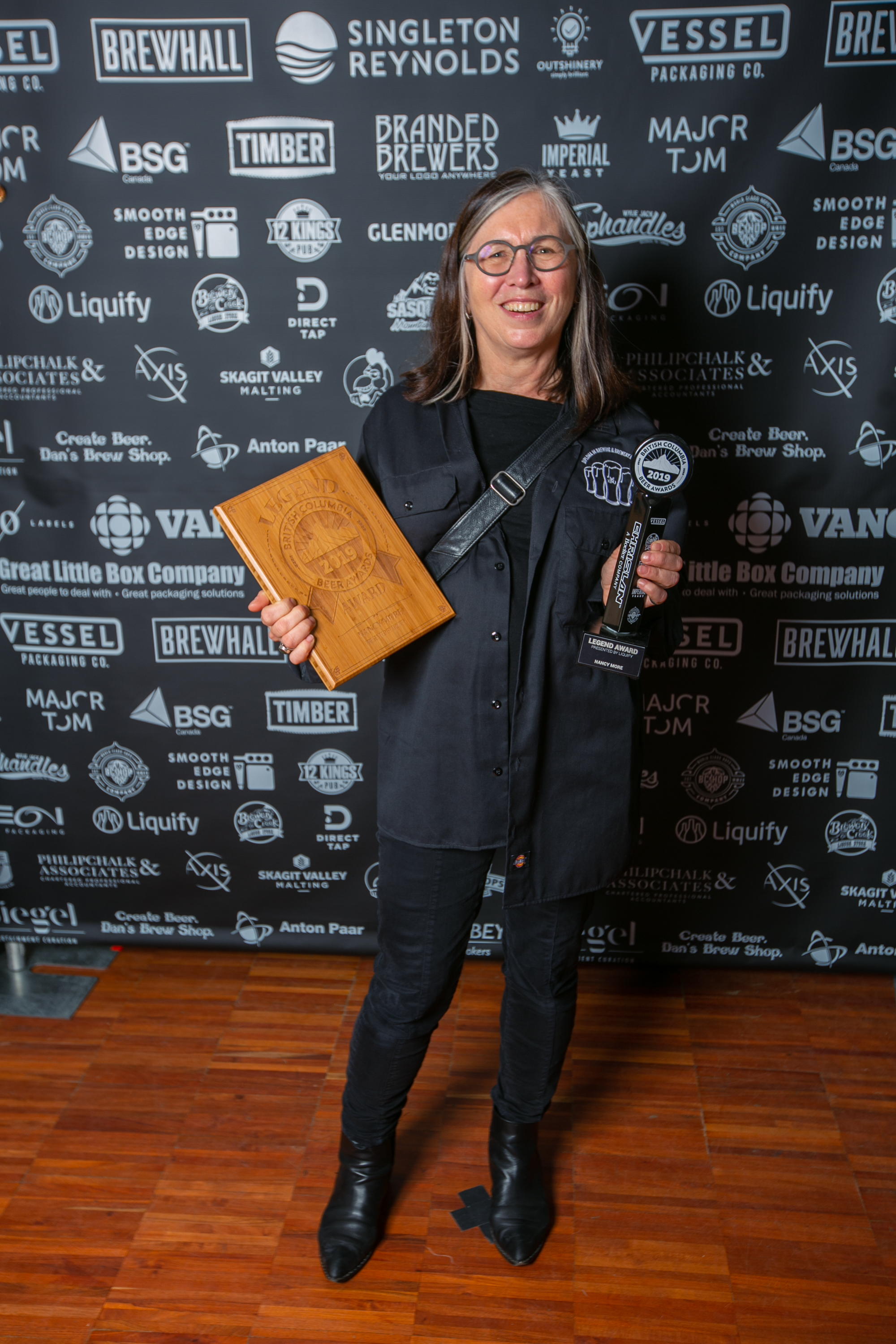 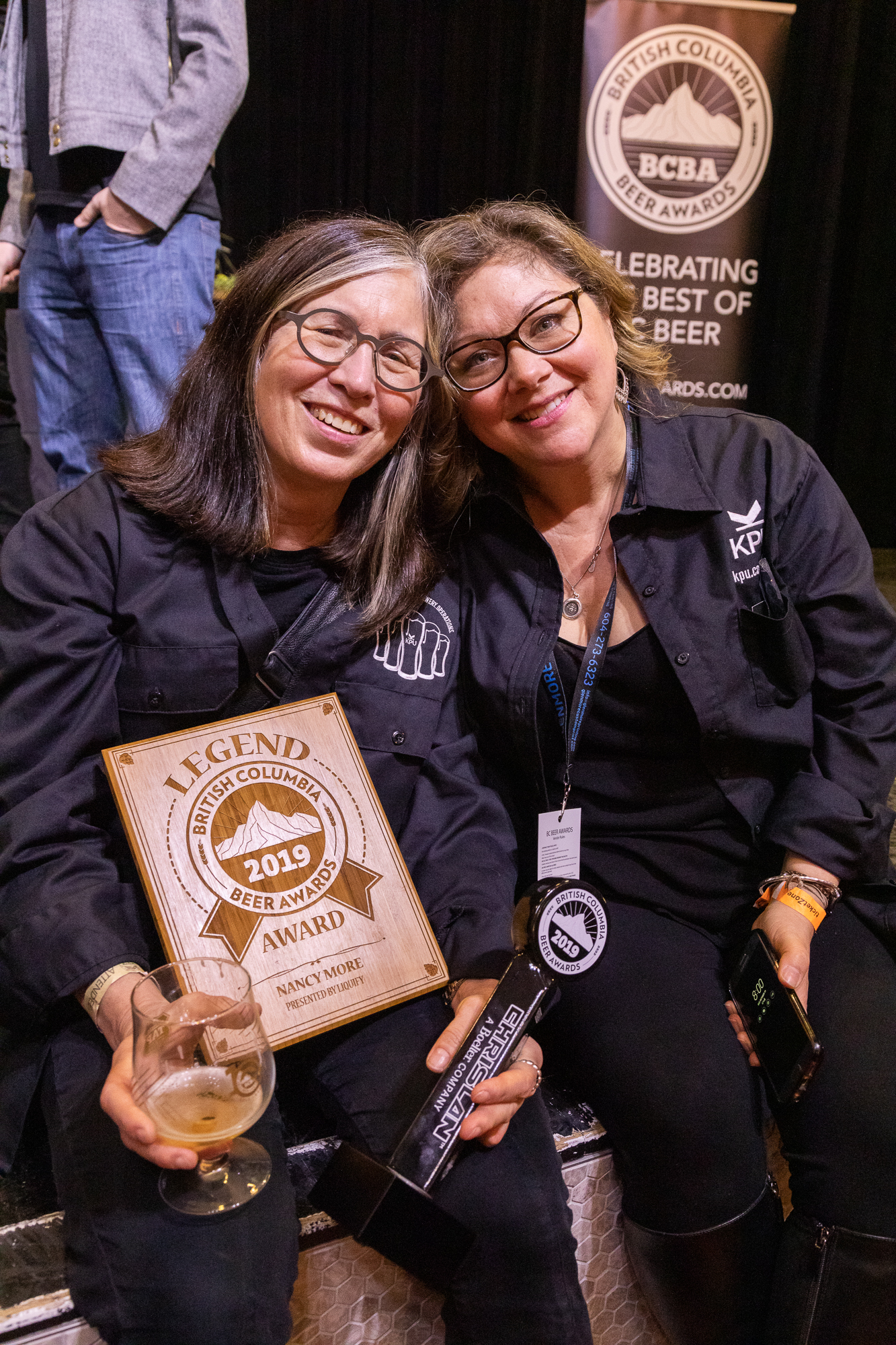 HOW LONG HAVE YOU BEEN IN YOUR PRESENT POSITION, AND WHAT ROLE DID YOU PLAY AT FIRST?

In October of 2014, Dominic Bernard and I started to develop the curriculum for the KPU Brewing program; I helped shape the content of the courses that were going to be given. The Brewing Industry Advisory Committee had already set a basic outline of courses they felt would be valuable to students, so Dominic and I worked together to ensure the individual courses included the appropriate content and that they built on and complemented each other. Our goal was to have graduates who understood the fundamental science behind brewing and could competently apply that in the real world.

WHAT ROLE DO YOU PLAY NOW?

KPU gave me the opportunity to come out to Langley and teach one day a week, so I started teaching in January of 2015. I co-teach the Brewing Industry course with Ken Beattie, and Microbiology and Fermentation as well as Brewery Management.

WHAT BROUGHT YOU INTO THE INDUSTRY OVER 40 YEARS AGO?

Like any university student, I liked to drink beer. I worked at the Protein Lab at the National Research Council in Saskatoon the summer between my third and fourth years at university. During that summer, I met two people who had applied to, or were in, the Labatt Breweries Technical Training program. I thought that would be fun, so when I went back to the U of Alberta to finish my chemistry degree, I decided to apply. Rumour has it that the year I applied, people in operations at Labatt were told they needed to start hiring women. So, after three sets of interviews, I was offered a position. I decided to take it and stay until it wasn’t fun anymore. I stayed with Labatt for 27½ years.

The training program was a three-year experience where we did every job in the brewery, studied the technical literature, kept voluminous notes on what we were learning and how it applied in the brewery, and wrote exams on each section. We were trained in brewing, packaging, distribution, and quality, and acted as supervisors in the areas we were being trained in at the end of that section.

WHERE WERE YOU THE FIRST FEMALE BREWMASTER IN NORTH AMERICA?

In 1985, I was appointed as the Head Brewmaster for Oland Brewery in Saint John, New Brunswick. That was pretty exciting, more for the opportunity to do the job than for the distinction and publicity that was given for being the first female. And moving to the Maritimes was my first experience in really learning how to work in a (slightly) different culture.

WHAT WERE YOUR LAST MAJOR JOBS?

I then moved from one coast of Canada to the other, and I really loved my time as the Brewery Manager at the Columbia Brewery in Creston. The people at Columbia have such great passion for what they do, and they absolutely work together in a team to make the best beer possible.

In 2001, I was given the opportunity to move to Europe where SunInterbrew had 14 breweries across Russia and the Ukraine. Then InBev wanted to use my combination of technical expertise and business management experience to work within the Global Technology Development team. That was another exposure to new ideas and new countries.

Finally, in 2005, Guinness came looking for me, and I joined Diageo in London, working in International Beer Supply. In 2006, I became Supply Director, which I think was the type of role that I had been looking for all my life.

I think what I originally loved was the combination of art and science. At that time (do I sound old?) we didn’t know much of what we do now about the science behind it. We had to trust the expertise of the people that we learned from. And gradually, I realized the great pride in being able to watch people enjoy the beer that I brewed and know that I was contributing to their celebrations.

DO YOU FEEL RESPECTED IN YOUR PRESENT ROLE? HOW HAS THIS CHANGED OVER YOUR 40 YEARS IN THE INDUSTRY?

I think there are two types of respect: respect for position and respect for the person. People who know me have the second, which is more important to me. My CV acts as an introduction to people who don’t know me but understand that I wouldn’t have got where I am unless I knew something.

I think that, in the brewing industry, what we do and the passion that we all have for beer is the same. We face the same challenges, but the priorities differ depending on the scale of the brewery. We always need to think about what the right solution to the specific situation is, which will depend on the size, the priorities, the capabilities, the geographic locations, etc.

HOW DO YOU FEEL ABOUT BEING A MINORITY FEMALE PRESENCE? DO YOU FIND KPU AND YOUR ROLE HAS BEEN A HELP GETTING MORE WOMEN INVOLVED?

When I started as a young woman, I think I believed my gender wouldn’t make a difference. My father always brought me up to do whatever needed doing. I hope that I have served as a role model to women and that young women realize that there is a place for them in this world.

IN 2018, YOU DECIDED TO LEAD A PINK BOOTS BREW AT KPU. DID YOU FEEL THAT IT WAS A BENEFIT TO THE WOMEN AT KPU?

I had a great time with all the women who came to Langley last March 8. We also invited the senior women from the other faculties at KPU and I think that we opened their eyes to what we were doing. In everything in life, community is the source of much support so the more we can build that community, the stronger we will be together and as individuals.

WHO IS YOUR FAVOURITE FEMALE IN THE INDUSTRY AND WHY?

Professor Inge Russell for her ground-breaking research and persistence in being a world-renowned researcher.

Claire Wilson for starting her own brewery (Dogwood Brewing). Julia Hanlon (Steamworks Brewing) for showing that you can have a family and be a great brewer and leader. Karyn Westmacott for her continued passion on making better beer. And all my wonderful female students who are so successful. If I start calling them out, I’ll miss some and I don’t want to do that. They know who they are.

DO YOU HAVE ANY SUGGESTIONS FOR WOMEN GETTING INTO THE INDUSTRY?

Keep encouraging them, let them see the successful women in our industry and know that they can do it. Build a community that they can see themselves as part of.

ANY GOALS FOR YOURSELF OR KPU?

My goals are for the continued success of the program, for our ability to develop the brewers that the industry needs going forward, and to get to a gender-balanced program.

KPU is always brewing new beers. Right now, I have been drinking the Birra Rossa that won at the BC Beer Awards.

I have different beers that I drink depending on the occasion. That is the joy of the craft beer movement now; there are always new things to try. So, I really move around to see what others are doing. But there will always be a soft spot for Guinness in my heart. How can you not love a brand that has been around for 250 years?