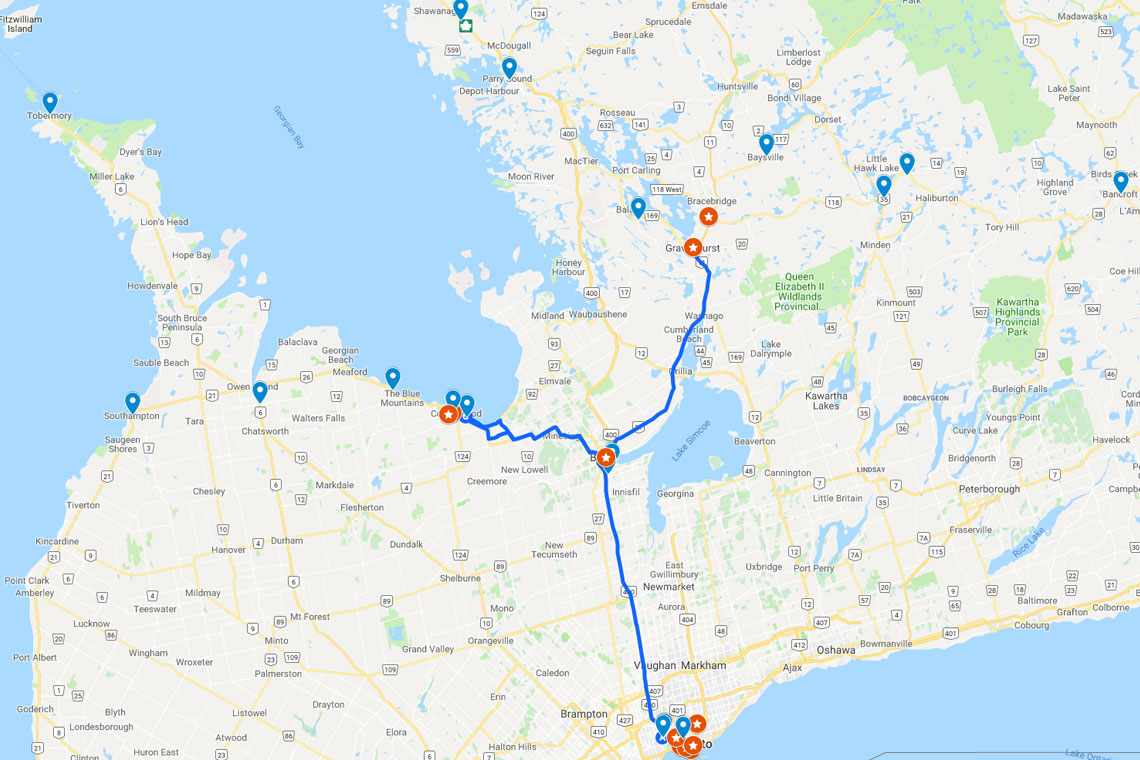 W hile most of our vacations are centred around exploring breweries, the reason for this summer’s travel was a family wedding at a “cottage” (as the ubiquitous Ontarian summer house is termed by well-heeled Torontonians) on a small corner of Georgian Bay. Not for nothing do we call ourselves the BeerSeekers, so after the festivities were safely over, we got down to the business of experiencing breweries. Ontario has over 300 of them. A good many are crowded around the GTA, but thankfully quite a few are sprinkled throughout cottage country too.

Heading north from Toronto, Hwy 400 zooms through the city of Barrie, the gateway to Ontario’s vast Lake Country recreational region. The highway is busy every Friday afternoon as endless numbers of urbanites make their way toward the peace and quiet of their cottages. As the map indicates, whether you choose to head west from Barrie or continue north into Muskoka, you can easily find breweries to explore.

For help with planning you trip, turn to the Cottage Country Beer Trail website. They are working on a passport you can take around to the region’s breweries. But no matter what, you do have to go through Barrie.

Occupying a space across from the waterfront of Lake Simcoe, Flying Monkeys’ small tasting room boasts esoteric décor (OK, that’s an understatement; the room is awesome, reminiscent of San Diego’s Modern Times) and an extensive tap list. Their mainstays include a light lager, amber ale, pale ale and a couple of IPAs. The hands-down most addictive beer was an incredible Chocolate Manifesto Triple Chocolate Milk Stout…just as good as it sounds! We brought a bottle back to BC.

Before you head further into Cottage Country, grab your supplies at Flying Monkeys. We picked up a couple of kegs for the aforementioned wedding, and the Confederation Amber Ale went fast.

From Barrie, head west on Hwy 26 and, with a few turns along country roads, you’ll end up in Collingwood, a recreation town situated on the southern shore of Georgian Bay. Here you will find 2016 CBAC Canadian Brewery of the Year Side Launch Brewing Company. Located in a big, bright warehouse space, the brewery is known for focusing on German-inspired beers. Ten taps consisted of seven cores and three very interesting small batch one-offs. Although there were three lagers (one dark) there were also two sours to choose from (including their popular Hibiscus Sour) and a Norwegian Kveik Farmhouse. While the vibe is “huge shiny factory”, the beer itself is well worth the trip. In the words of son Kevin, “they’re all pretty good…you can quote me on that.”

While in Collingwood, also visit and eat at Northwinds Brewhouse and Kitchen, a classic brewpub with modern touches. Northwinds has 14 taps, and their menu lists a total of 27 beers rotating seasonally. These run the gamut from Altbier to ISA to Blonde Stout. Our consensus was that the best beer of the day was their Gatekeeper Belgian IPA.

Now that you’ve made the rounds, head back to Barrie and this time veer northeast to get to the Muskoka region, where you’re going to find some of the Lake Country’s most amazing breweries.

Even here in BC, with all our widespread territory and 180 breweries, it’s hard to conceive of something like Muskoka Brewery. Picture a gigantic beer factory in the middle of nowhere. No railway, no major truck route. Not in a city or town. In a way, this defines the Ontario brewery that’s best known for marketing the cottage country lifestyle.

Muskoka is more or less tied with Steam Whistle as the largest independent brewery in Ontario. What impressed us most during our brewery tour was the size. From its beginnings in 1996 in an 8000 square foot building, Muskoka’s footprint has expanded tenfold to its current 82,000 ft2 operation. Just the cold room—a 10,000 ft2 refrigerator that spans the entire width of the plant’s back wall—is larger than most craft breweries.

Its location contrasts with, for example, Central City Brewing’s purpose-built 65,000 ft2 facility in Surrey. Deliberately constructed off the newly-built South Fraser Perimeter Road in 2012-2013, that brewery is directly connected to a major shipping route. Even the Columbia Brewing plant, famous in its day for a brand marketed as Kokanee, glacier fresh, was built in Creston city proper. But if you want to get to Muskoka Brewing, you have to take the same kind of pastoral back road you take to somebody’s cottage.

“It was always important for Muskoka Brewing to be in Muskoka,” says Val Hamilton, Marketing Communications Manager. As she understated, “we could have saved a couple bucks by moving to Toronto.” But their roots in the Bracebridge area were planted too deeply thanks to the community involvement that kept the brewery in existence many years ago. Muskoka’s gratitude for this is reflected in their Community Venture Fund series of grants to worthy local causes, backed up by products like this Dry Saison collab. with Vancouver Island Brewing—which Muskoka bought a couple of years ago. That’s right: they own a significant brewery here in BC (the one major province where their own products aren’t really present).

“Even though we are this big, we feel small,” Hamilton shares. And their culture reflects that, winning them Canada’s 10 Most Admired Corporate Cultures recognition in multiple years. “People want to work here; there’s not much turnover, and lots of buzz when a position opens up,” states Val, who had to beat out 350 applicants to earn her job.

Every morning, team members get together for “sensory time,” where they start the day with a product evaluation session and a chance to “cheers the beer.” Team members are given sensory training and enrolled in the Prud’homme beer education program. Another team-focussed program is the Moonlight Kettle series, in which a brewer teams up with two other staff members who get the chance to design their own brew.

Hamilton observes, “I think Muskoka as a region is very desirable for people in Ontario,” and names Tofino (the region) as a BC analogy. “We always think about whether the Muskoka name helps or hurts us,” she admits. Interestingly, one would assume that they are a summer-only brand, but their sales are strong in winter as well. “People share their Muskoka beer photos in the winter. Maybe it’s a little taste of summer” for people aspiring to be at their cottage, she opines.

Side note: if you travel to Muskoka, you’ll find another BC connection just down the road from the brewery. The head office of Brew Culture, well known in Vancouver as a distributor of yeast and hops, is just outside of Bracebridge. 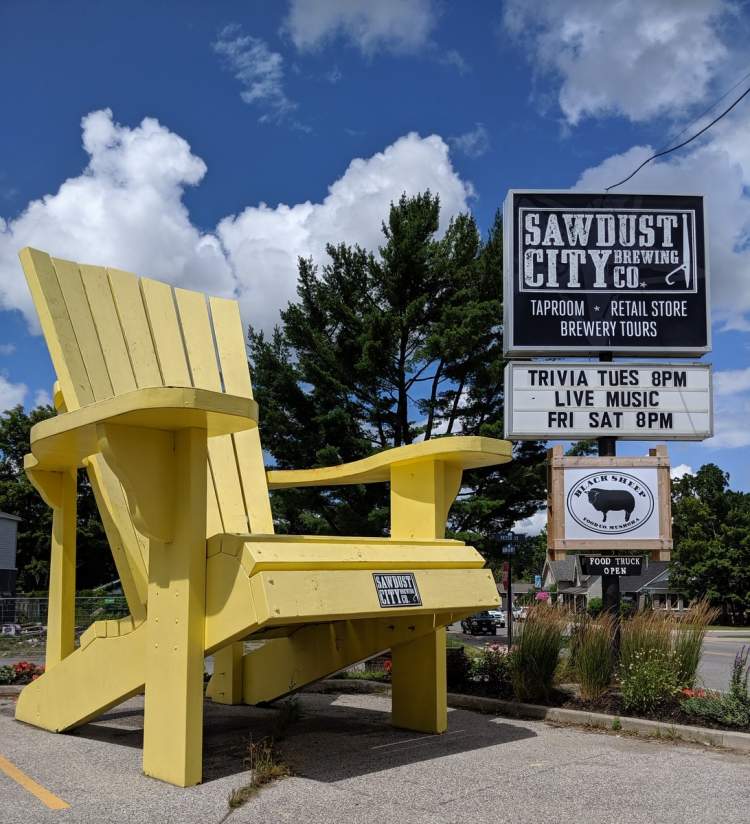 When you pull up to Sawdust City Brewing, the first thing you see is the world’s largest Muskoka chair in the parking lot. Having just come from Muskoka Brewing, we were mindful of their trademark and wondered if there was some friendly patio furniture rivalry going on between breweries.

Turns out that chair’s been in Gravenhurst for ages, and Sawdust became the new caretakers in 2015. Like Muskoka, Sawdust City had an early connection with the Canadian Brewing Awards—but not from winning them. Sawdust City is owned by Rob Engman of TAPS beer magazine, who operates the annual competition. For that reason, they tend to stay out of the awards. But head brewer Sam Corbeil doesn’t mind.

Engman’s connections are a serious benefit to Corbeil and the brewing team, because they have the ability to network with the entire Canadian craft brewing scene. For instance, Sawdust did a collab. beer with last issue’s cover brewery Cannery Brewing of Penticton.

Aside from these noteworthy distinctions, the real reason to come to Sawdust is the massive amount of brewing experimentation going on. Corbeil, who learned his chops in Germany, then worked at Niagara College Teaching Brewery, which is similar to Langley’s KPU Brewing & Brewery Operations department. Sam is fully trained but has that homebrewer ethic: he loves to tinker, and it shows in how the brew team works.

Their signature customer membership program is called the 52 Pickup Beer Club, for which they commit one new brew each week. There’s no cheating, according to Corbeil; that is 52 honest-to-goodness new and different recipes each year. As they state, “we’re nothing if not ambitious.” You don’t have to be a member to enjoy all this variety; if you live in Gravenhurst, you just visit the tasting room (and their spanking new patio, which opened the week of our visit) regularly and watch the 18 taps change.

Also, like Muskoka, there is a staff brew program in which various team members get their own chance to conceive full-on branded products replete with label design. The week we were there, there was a release cleverly named Lumberbrau. At 20+hl, these staff brews are a real commitment.

Sawdust definitely mixes it up and covers all beer styles, but there is a category they’re especially known for. Each year the brewery hosts FunkFest, a celebration of sour & barrel-aged beers. Much like our Farmhouse Festival, it can draw up to 1500 people—but these aren’t West Coast beer geeks on a posh university field. These are regular townsfolk and beer fans in a small-town parking lot quaffing sours. That’s some pretty impressive local beer education Sawdust has pulled off. Apparently the Ontario Culinary Tourism Alliance thought so too, awarding FunkFest Culinary Tourism Event of the Year. 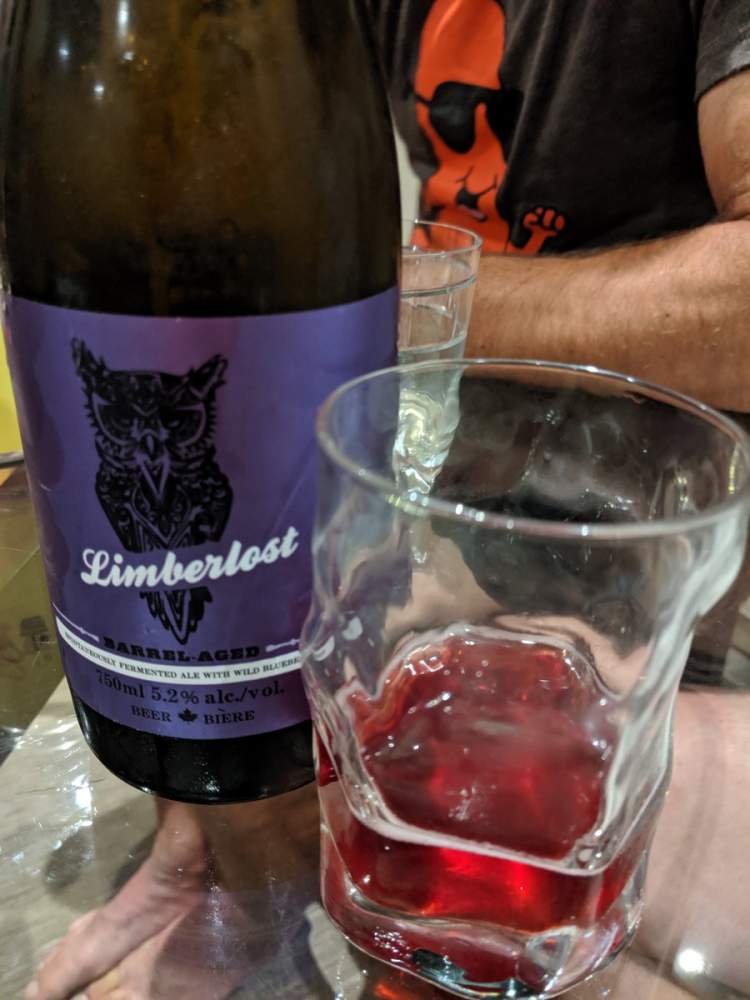 Each year, Sawdust releases a wild yeast lambic as part of its Limberlost series, in large 750ml bottles. We were pleased to try the 2019 release with wild blueberries.

Many thanks to Marketing Manager Brittany Williams for arranging a great experience. Sawdust City is a classic brewery with the true ethos of craft: doing it for the passion, not just for the job. Sawdust City reminded us why we started writing stories about breweries and the people that make them.