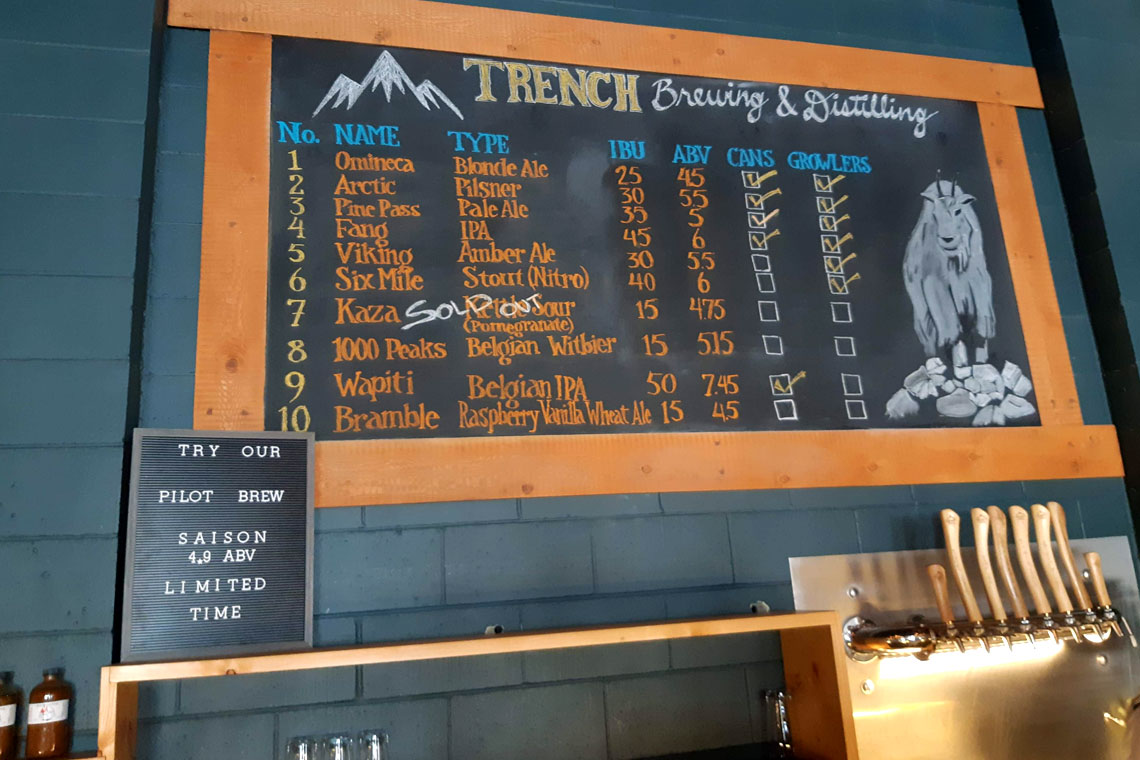 This has been a spectacular year for craft beer in Northern BC. There have been craft beer festivals in Williams Lake and Quesnel (Cariboo Craft Beer Festival). In Prince George, the CrossRoads Brewing Street Festival Series returned and there have been two events to date, with the third slated for the autumn. The Valemount Craft Beer Experience was received with open arms once again. Those at Three Ranges Brewing Company in Valemount are truly great folks making great beers and doing great things for the community. On a smaller scale, it’s very common for many local craft breweries to host game nights, live music, and other smaller events at their locations. Some are for charitable causes such as Rounds For Hounds, which Trench Brewing & Distilling hosted for BC SPCA North Cariboo.

Northern BC craft breweries are being showcased in other parts of the province, too. Trench Brewing & Distilling had their own booth at the 2019 Vancouver Craft Beer Week weekend beer festival, and Smithers Brewing Co. was featured on tap at the BC Ale Trail-er. Speaking of the BC Ale Trail, Barkerville Brewing’s Sluice Juice Pale Ale was featured on their Summer’s Best Beers list. Finally, CrossRoads Brewing, Wheelhouse Brewing Co. and Smithers Brewing Co. will be featured at the 2019 Great Canadian Beer Festival in Victoria.

The availability of Northern BC craft beers in Prince George is continuing to expand through licenced establishments and stores. More locals are supporting these fine craft breweries. You can find CrossRoads and Trench beers at the CN Center in Prince George. Northern Fancon 2019 featured craft beers from Trench and Barkerville. Trench has been at the Prince George Farmers’ Market. Barkerville was once again the beer sponsor/supplier at the ArtsWells festival. Three Ranges was the official beer supplier at the 2019 Robson Valley Music Festival in Dunster. In McBride, Three Ranges beer is on tap at the Giggling Grizzly Pub. The Roadhouse restaurant, west of Dawson Creek in Arras, continues to have a rotating BC craft beer tap. There are craft offerings at the Rolla Pub north of Dawson Creek, too. Original Joe’s in Dawson Creek boasts an impressive craft beer selection and features Fort St. John’s Mighty Peace Brewing and Beard’s Brewing craft beers on tap. Even at Prince George’s Northern Lights Estate Winery, there’s an impressive packaged craft beer selection.

Yet, I feel there is still room for improvement in Prince George and Northern BC. Many establishments and stores are sticking with macro beers and offering products like Shock Top, Goose Island, Belgian Moon, Rickard’s Red and Sleeman as a consolation prize for craft fans. I foresee a change in the next few years, though, as local restaurants, chains, stores, venues and event organizers hear and acknowledge the voice of the people wanting real craft beer. One day, macros will no longer dominate around here.

Once again, the craft beer revolution in Northern BC is growing. It’s all thanks to a true pioneer and one of the founding fathers of BC and Canadian craft beer, Alexander John Mitchell. Thank you and cheers, good sir.

All in all, when it comes to craft as a whole, especially with what’s happening in Prince George and Northern BC, I think that the macros will never replicate or beat our craft beer.