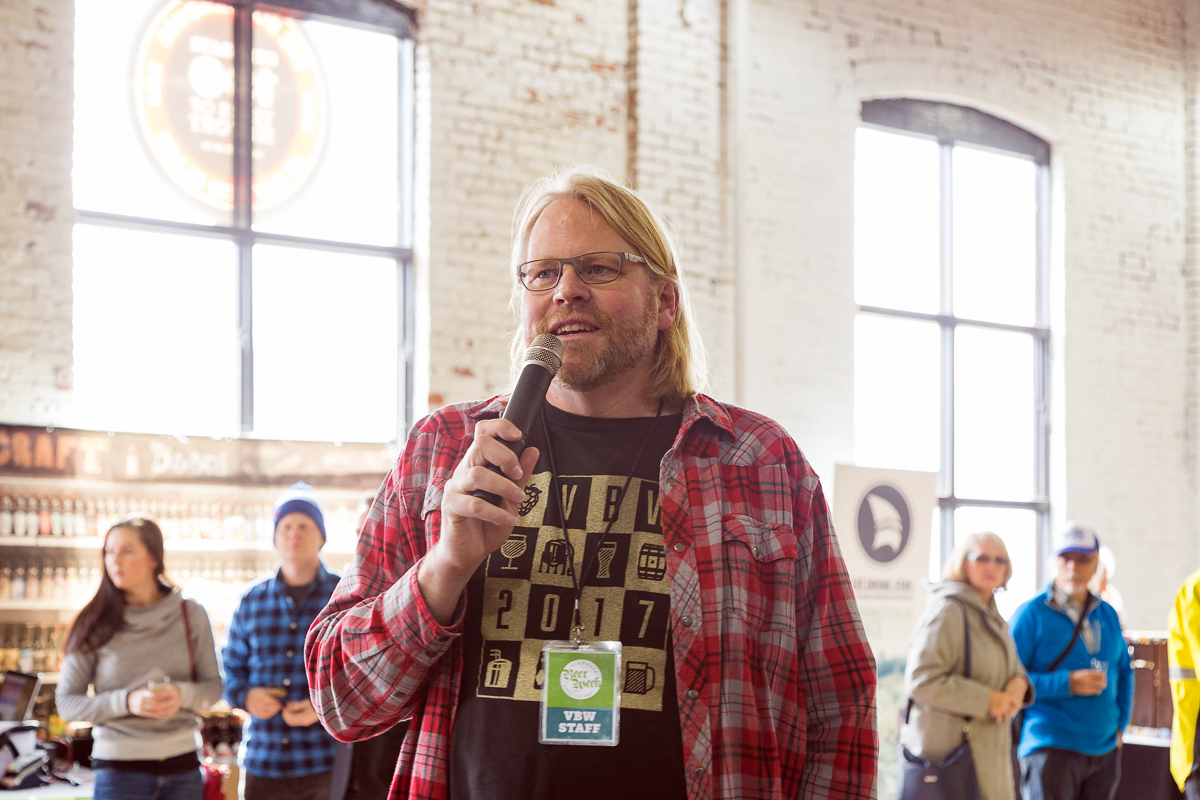 Straight from the man himself, we get the inside scoop on GCBF 2019, and on taking over a renowned festival from a legendary group of pioneers.

Despite being only in his late forties, book author and event producer Joe Wiebe is already a legend in BC craft beer circles. But when he and his colleagues in the Victoria Beer Week Society were offered the job of taking over production of the Great Canadian Beer Festival—Canada’s longest-running (and probably most beloved) beer event—he was staring at the reality of helping replace a group of even bigger legends.

Names like those of Gerry Hieter, John Rowling and Phil Atkinson—former Directors of the now-retired Great Canadian Beer Festival Society—are hallowed in the pantheon of BC craft beer community leaders. But they’re no longer spring chickens; Rowling will turn 80 next year. As Joe mentioned to What’s Brewing back in January about the the opportunity to take over the event: “I knew we couldn’t say no.”

It was always going to be an immense challenge to inherit responsibility for GCBF. But right out of the gate, the VBW group took some strong decisions and put their own stamp on the 27-year-old event. Rebranding themselves as the Victoria Beer Society, they instituted a membership-driven sales model, a change in vendor invitation policy and a massive upscaling in number of booths. It’s adding a new level of excitment to what had become a very traditional annual event.

Finally, all the planning is about to come to fruition. There are only two more sleeps until GCBF. Let’s see what Beer Director Wiebe has to say now that we’re right down to the wire.

What’s Brewing: This spring and summer, you and the freshly-renamed group now known as Victoria Beer Society have had to step into some pretty big shoes. But you’ve organized events before, and you’ve been around GCBF for decades. Has the learning curve been more or less than you expected?

Joe Wiebe: The learning curve has been very steep, but I can’t say I didn’t expect that. The GCBF is a far bigger event than anything we have produced in the past. To put it in context, we expect upwards of 9,000-10,000 people to attend the GCBF over two days. During Victoria Beer Week, we sell about 2,500 tickets. VBW features multiple events, each with its own unique needs, while this is essentially just one mammoth event. On a logistical scale, this has so many more moving parts and so many more boxes to check on the to-do list. The best thing about it is that Gerry Hieter and John Rowling have been very generous with their time throughout the transition, and most of the core team of managers who have done the grunt work of putting on the festival over the past several years were able to come work for us so we can rely on all the knowledge and experience they bring to the table.

WB: This year, with approximately 100 breweries listed, GCBF will feature the largest contingent in its history. Was that a goal that VBS set out to accomplish, or did the list just grow that large all by itself?

JW: Expanding the number of breweries was something we decided to do almost immediately after we were handed the reins. We all felt like there is more room on the field for brewery booths, and we thought that consumers would be excited by the prospect of having more variety to choose from. Also, we wanted to bring in more breweries from the rest of Canada, but we didn’t want to restrict access to BC breweries. We basically have the same number of BC breweries as in the past, but we’ve added a bunch of breweries from the rest of the country.

WB: In recent years, due to GCBF’s popularity amongst the BC brewing community as well as size constraints, it was necessary to use a lottery system to select the BC participants. Were you able to accommodate almost all of those who wanted to attend this time?

JW: We decided not to use a lottery system. We told the breweries that we would decide who got in and who didn’t because we felt that was the most honest way to go moving forward.

In the end, we actually were able to accommodate almost all of the breweries who applied because we also had the BC Ale Trail-er option where we were able to include 9 breweries.

WB: Working with the Canadian Craft Brewers Association, you have assembled a list of 25 Canadian breweries which will be represented from outside of BC (including all the way East to Nova Scotia!). With 1000 breweries in Canada, how did you manage to decide who to invite?

Bringing beer in from outside BC is a lot more challenging than people might realize. It’s not as simple as calling up a brewery and asking them to ship a keg because interprovincial trade rules require those breweries outside BC to work with a distributor based here who also has to get their beers listed by the Liquor Distribution Board. It’s not ideal for a one-off event. So I spent much of the spring and summer working closely with two distributors—Copper & Theory and Untapped—to connect with breweries across Canada who might be interested in developing these relationships for the GCBF (and hopefully beyond).

Big thanks to those distributors and breweries for making it work. In the end I was really happy with the range of breweries we confirmed from across Canada because it includes some really interesting breweries that are bringing some unusual and intriguing beers.

WB: You have launched a brand-new, interactive list of the 250+ beers we can expect to see at GCBF. It allows the visitor to search on words like “sour” or “fruit”, for example. How did you come up with the idea for this new searchable approach?

It evolved out of the new Victoria Beer Society website and the way it allows us to capture and present information from the breweries. It’s a great bonus that it allows us to present the beer descriptions in such a flexible, searchable way. Glad you like it!

WB: GCBF is mere days away at this point. What is the single most stressful item left on your agenda?

Well, up until this past Friday I was wondering if we’d ever get the Special Event Permit allowing us to actually serve beer! But then that was finally approved so now we’re good to go.

Seriously, though, I think our team would all agree that the setup on the field is the most stressful item left on our agenda: the prospect of putting together all the infrastructure required for such a big event is very daunting. But the good news is that the crew from past years has done it many times so we know it can be done!