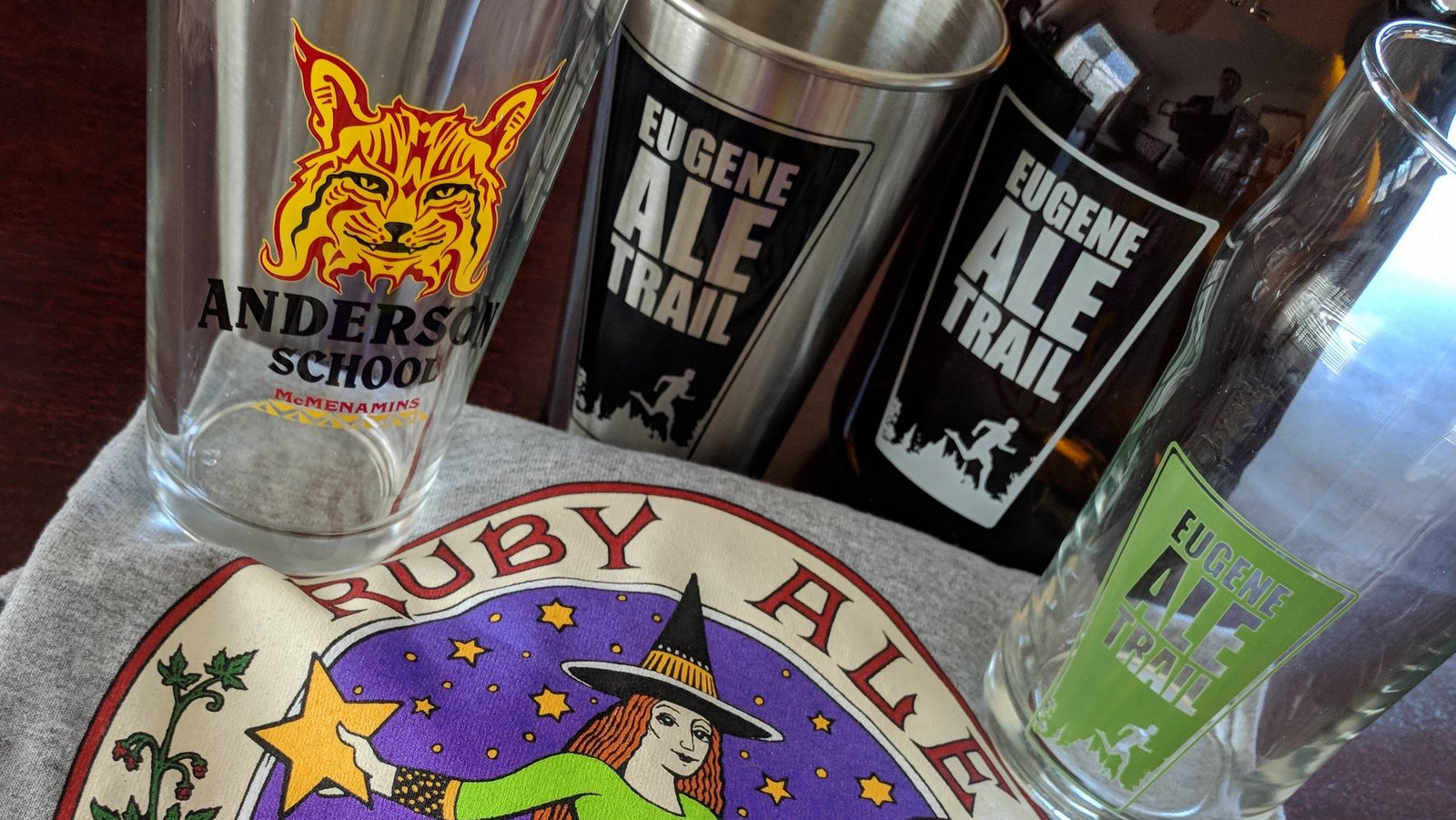 The name ‘BeerSeekers’ was born six years ago when, after our umpteenth brew tour in Oregon, the two of us thought “this trip was really interesting, and we just have to tell people about it.” Fortunately for the two of us CAMRA BC members, there was a journal to which we could submit our story: What’s Brewing, which at the time was delivered to all members bimonthly. A lot has changed with WB since then, including the fact that we are now both on its editing team. As we found out recently, a lot has also changed in the city that inspired our literary career: Eugene, Oregon.

After years of driving to Portland then branching out to Oregon’s other reservoirs of beer (Bend, Hood River, Salem, Astoria, McMinnville/Willamette Valley and the Oregon Coast), we shifted gears in spring 2013 and embarked on a railway excursion care of Amtrak’s Cascades line. Its trains link downtown Vancouver with Seattle then Portland before terminating in the Beaver State’s third largest city. We heard the call of the rails again this year, so we settled into our seats and headed south in comfort with a bottle of Ninkasi Brewing’s Oatis oatmeal stout and free WiFi.

A very solid beer town, Eugene currently has 17 breweries (including the secondary outlets a few own). Compare that with our Kelowna, 80% the size of Eugene but with only nine breweries (five more coming though!). Based on this, local visitor bureau Lane County Tourism rolled out a mobile app for its Eugene Ale Trail late last year. Much like the one that our own BC Ale Trail has recently deployed, the program rewards you for being a good beer crawler. We tested it out firsthand and collected enough brewery visits to earn some of the booty shown above.

THE BIG KIDS IN TOWN GROW UP

On that first visit, we found a few outstanding breweries, some of which have gone on to enjoy wider notoriety in the years since. For instance, you might be familiar with the name Ninkasi Brewing. As Eugene’s best-known brewer it was naturally our focus back then, and we enjoyed a great tour of the place. This time round, we stopped in only briefly on our way to newer kids on the block. But wheels were in motion around the time we were there, and upon returning to BC we learned that Ninkasi had sold a majority ownership stake to a new consortium called Legacy Breweries.

Similarly, in 2013, we visited a rapidly growing brewpub in neighbouring Springfield named Hop Valley. Sadly, in 2016 it sold to MillerCoors. The upside is that it has a huge new location in Eugene, and its products can now be found in bars and sports stadiums all over the West Coast—which is what happens when the money comes in. But Eugene’s two biggest breweries are not the focus of this story; we have newer things to share.

Pronounced “The Whittaker”, Eugene’s most celebrated and colourful neighbourhood is home to its best-known brewers, Ninkasi and Hop Valley. Among others however, there’s still-independent Oakshire Brewing. We’d visited the original industrial-district location before, but shortly afterward they opened a Public House in the Whiteaker. Its tasting room serves 20 brews, some of them available exclusively there.

Like many successful brewers, Director of Brewing Operations Dan Russo started homebrewing in college. He also worked for Rogue Ales for many years before landing at Oakshire. He says the brewery is known for its diverse portfolio of beers, as well as their pilot program which allows them to try “crazy ideas for beer that actually work.”

Try to get to Oakshire on a Tuesday around 6:00 pm for their weekly beer release. On our visit they tapped Brachiosaurus, a delicious hazy DIPA. It was part of their Dinosaurs Will Die series, so named for the “prehistoric brewing industry that doesn’t like new styles”. Both Dan and Director of Retail Operations Hannah Child strongly suggest that you plan a visit around their annual Hellshire Day (June 15th this year), focusing on rare barrel-aged beers from around the USA.

The breweries in and around downtown Eugene are easy to walk to. Let’s start with Falling Sky Brewing, which has been a big part of the Eugene scene since 2012. It now operates three locations: the original brewpub, a Delicatessen, and a Pizzeria. Each location has different beers on tap, but all the production occurs at the brewpub.

Head brewer Scott Sieber says he’s a homebrewer at heart, beginning his career in the local homebrew shop.  There was a stint at Rogue Ales before he returned to the homebrew shop, then co-founded Falling Sky. His flagship beers include three IPAs, but their portfolio includes an ever-changing varied selection of solid, great-tasting beers. Sieber enjoys experimentation—his ever-expanding brewhouse has a pilot side for his experiments with interesting ingredients—but he maintains that all their beers start from a good solid base.

Claim 52 Kitchen is located around the corner in a bright, modern space. Their tap list includes no less than six IPAs, three of which are hazy. Notable was Raspberry Beret, a delicious deep pink, slightly tart Sour IPA. This ‘Kitchen’ is a secondary location, with the original limited-hours brewery at another location.

Although it’s hard to tell from the name, The Wheel Apizza Pub is an excellent brewery as well as an Italian East-coast style pizzeria. Head Brewer Tobias Schock’s extensive brewing history includes Hop Valley and the innovative but now-defunct Agrarian Ales. He is interested in fun, new-age brews—taking an established style and plugging in unique ingredients or processes to make something new.

Toby’s line of lagers represents that fusion of old world and new. The Quest Pils is his search for the perfect pilsner to pair with their menu. Along with their Hazy IPA, it’s become one of their flagship beers and Toby describes it as “the cheese pizza” of their lineup. Having drank pilsner in the Czech Republic last summer, we can say Schock’s really hits the mark. With 11 beers on tap there is something to tickle your fancy.

Downtown in Eugene’s neighbouring borough, Springfield, you’ll find a wall mural provided by Portland-born Matt Groening, creator of The Simpsons. It’s a tribute to the town that inspired the setting for his cartoon series. Near that, you’ll find Plank Town Brewing, a Springfield original. Serial hospitality entrepreneur Bart Coridio opened this seminal brewpub back when the town was decaying and helped kick-start its revitalization.

Head Brewer Steve van Rossem notes he was a homebrewer “before it was legal”. After extensive experience at McMenamins and Block 15 Brewing, van Rossem helped design the brewhouse and takes great pride in its solid, tasty beers. The brewery focuses on classic UK, German and Belgian styles using high-quality ingredients. Taps include two cask lines and two nitro at all times.

The same care that goes into the beer also goes into the food, showcasing top-quality local ingredients. Coridio describes the experience as fine dining in a casual atmosphere, and after enjoying a meal there, we’d have to agree.

A SONG OF BEER IN WINE COUNTRY

About a 30-minute drive out of town through some lovely Oregon wine country, you’ll find Alesong Brewing & Blending. Its tasting room sits perched atop a hill overlooking a stunning valley, next door to King Estate, one of the biggest wineries in the area.

Why put a brewery way out there? Founded by brothers Doug and Brian Coombs and friend Matt Van Wyk in late 2016, Alesong is not your typical brewery. Brian and Matt both come from beer, having worked at Oakshire, but Doug has a background in wine, and therein is the key to their difference: their art involves blending barrel-aged brews much like vintners do.

Alesong wasn’t intended to be just another industrial brewery, partly because that model is already highly competitive, and because of the founders’ vision. All their beer is brewed offsite, then barrel-aged, with a typical timeline of eighteen months from start to finish. They like to create using various local fruits, and their proximity to grapes allows them to do wine-beer hybrids. While they have a couple of standard seasonals, those change depending on what they put into them and which barrels they go into. There are over 300 barrels in their cellar at any one time. The resulting esoteric liquids are never the same twice.

Alesong is coming to Vancouver’s sold-out Farmhouse Festival in July, so if you’re lucky enough to be there, make sure to check them out!

THINGS TO DO AROUND TOWN

Lane County Tourism, the folks behind the Eugene Ale Trail, were kind enough to set up all these brewery touring opportunities for us. When we reached Eugene, we were welcomed by enthusiastic and knowledgeable Lane County rep Meg Trendler, who graciously took the time to show us around town on her own birthday!

For those interested in some points of interest besides the beer, Eugene is a lovely town with many things to do. You can drive up a winding road to Skinner Butte (Simpsons reference!), a local landmark rising about 200 feet above the town and offering an incredible view of Eugene and the valley below. Along the west-side base of the Butte you’ll find “The Columns”, a popular rock-climbing destination. Back in town, the locals are rightly proud of Project 20 x 21, an initiative to have twenty-one murals painted throughout downtown by 2021.

Many thanks to our hosts at Lane County Tourism for setting up a fantastic visit that we won’t forget.