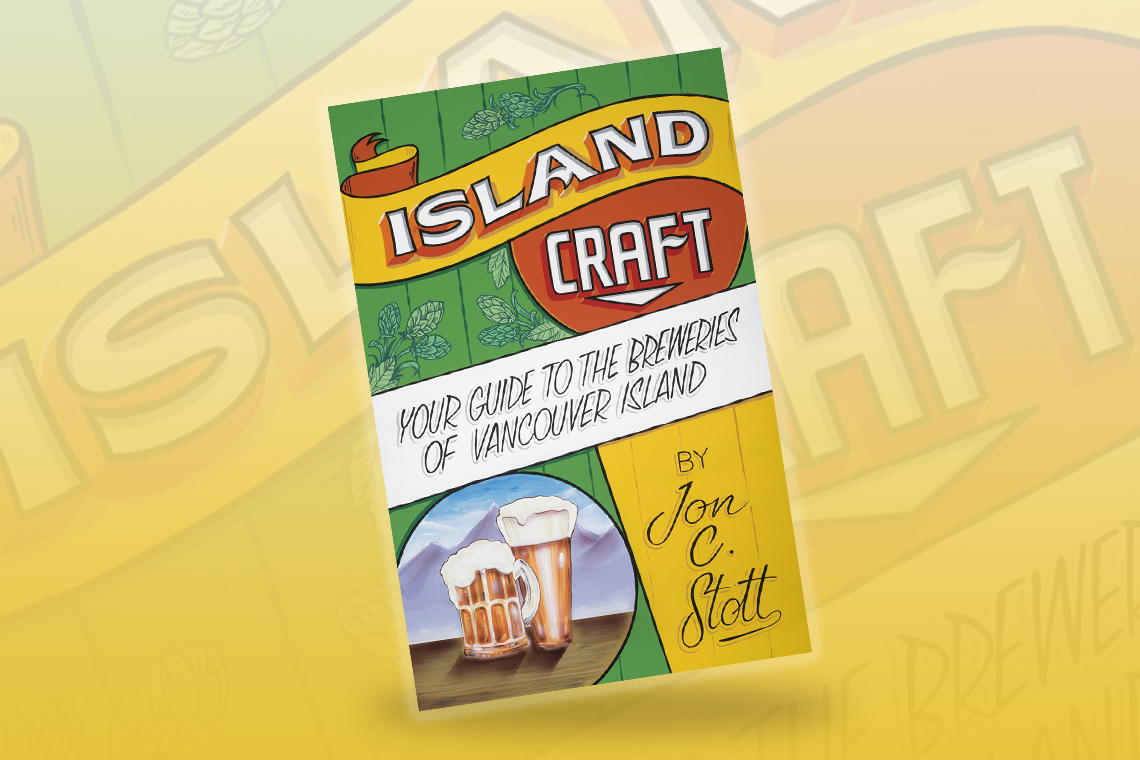 Not long ago, my father treated me to lunch at a coffee shop near my home of Sidney, BC. As I compulsively do, I looked at the magazine pile, and was pleasantly surprised by a notice in one them about an upcoming new book on Vancouver Island craft brewing entitled Island Craft. I searched my memory trying to recall where I knew the author’s name from. I eventually realized that Jon C. Stott is the author of 2010’s Beer Quest West, a guide to the breweries of BC and Alberta.

Beer Quest West was one of the first books I reviewed for What’s Brewing, along with BC-focused beer books by Leo Buij, Lisa M. Morrison and Joe Wiebe. Although Wiebe produced a second edition of his Craft Beer Revolution and continues to regularly write articles on BC beer, the other authors have been less visible. Also, outside of Frank Appleton’s memoir Brewing Revolution, there have been few (if any) books focusing on BC beer in recent years. It’s nice that at least one author has returned to writing about our beer scene.

Stott, though, doesn’t just write about BC. He has written a book about beer in New Mexico, where he now lives, and another about Washington and Oregon Coast brewing. I gave Beer Quest West a positive review those many years ago, and it seems that writing two other beer books has honed Stott’s craft all the more.

Although Stott now lives in New Mexico, he was born and raised on the Island and celebrated his twenty-first birthday at the iconic “Ingy” (Victoria’s notorious Ingraham Hotel). His first-person narrative works perfectly for this book as he recounts the history of the Island and its brewing. His writing is as approachable and engaging as is his subject matter. Reading this book, I realized how little I know about the Island I live on.

Island Craft is now automatically the reference for any question relating to brewing history on the Island. For instance, the day I opened it, Island Craft resolved two debates I’d had recently (since I know you’re super curious: Blue Buck was not one of the first beers Phillips released, and Clay Potter wasn’t the original owner/brewer of Moon Under Water). Beer guidebooks generally have a somewhat limited shelf life, but Stott’s strong research and thorough history lengthen this book’s long-term value.

If Island Craft will age like a fine barley wine, it’s also as fresh as a wet-hopped IPA. When it arrived in the mail, it had that ‘new book smell’ and was (I swear) still hot from the printing press. The production values are noticeably higher than Beer Quest West’s, with glossy pages and colour pictures. Stott’s writing is even fresher. Beer scenes change constantly, which can make a book out of date by the time it prints. Island Craft does not suffer from that problem. If I understand correctly, Stott took his research trip in November of 2018 and I finished reading in mid-April 2019. That’s an incredibly quick turnaround to write and publish a book. To put that in perspective, it’s a little over two issues of What’s Brewing ago. That’s how fresh this book is.

Reading Island Craft, I realized how much I’ve been neglecting the craft beers brewed here. Stott describes breweries I knew little to nothing about. It’s almost like I have an unconscious bias against hometown and island breweries. I’m so busy hunting down the latest trending beer or brewery from Vancouver or the US that there’s a lot I’ve missed.

Stott uses interviews from his previous book’s research to show how much the craft beer scene on the Island has changed and grown since 2010. If the reformed liquor laws have allowed Vancouver’s beer scene to explode, they have also allowed Island craft brewing to make radical changes. There is much to celebrate about Vancouver Island beer and this book is a great resource when exploring it.

If there’s a theme running through Island Craft, it has to be ‘Lucky versus Local’. Although Lucky Lager hasn’t been brewed on Vancouver Island in over 30 years, it still commands a remarkable amount of brand loyalty here. But now the Islanders are learning about the joys of fresh, locally made beer that actually supports the community and doesn’t smell like brand loyalty to a foreign-owned corporation. Jon C. Stott has admirably done his part to spread the word.