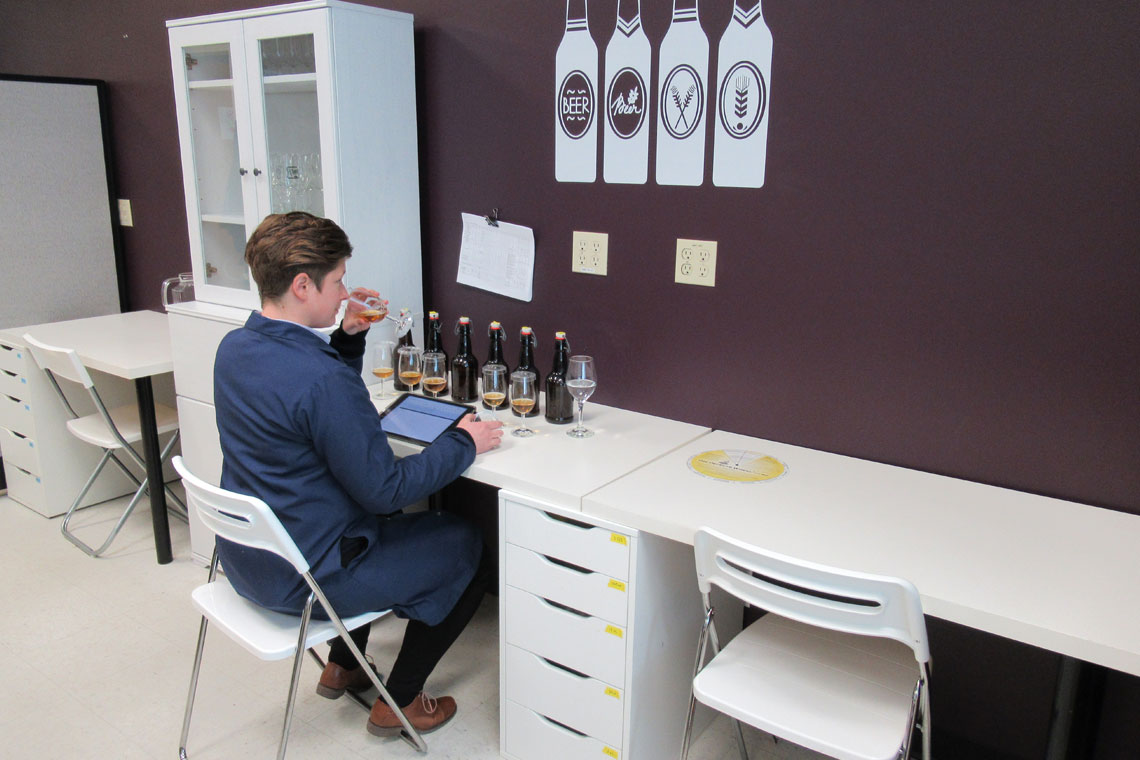 For craft brewers, the quality of the ingredients they use to make beer is critical. Each of the natural products they source from their many suppliers can vary from year to year or even batch to batch. Among those ingredients, one category that brewers consider vitally important is yeast. Brewers typically collect yeast cells from one brew to pitch into the next. However, unless sophisticated lab facilities are present, a batch of yeast can only be used about seven to ten times. After that a fresh culture is needed, since there is too much potential for contamination with bacteria or other yeasts, and development of undesirable characteristics.

The number and location of suppliers of yeast has tracked alongside the steady growth and geographic expansion of the craft brewing industry in western North America. Wyeast of Hood River, Oregon, has been around since 1986. White Labs was founded near San Diego in 1995. Omega Yeast took root in Chicago and Portland in 2013, and Oregon’s Imperial Yeast started up in 2014. With the explosive growth of craft breweries in BC, it was natural that we should finally get our very own yeast company.

Bright Brewers Yeast has operated at their facility on the University of British Columbia campus since 2016. “We use selective breeding to create non-GMO strains with specific fermentation kinetics, flocculation, and flavour compounds” says Jessica Swanson, lead development scientist. “The wine industry has been using breeding to develop new strains for decades, but the techniques required to do this commercially for brewing yeast have only really been developed in the last seven or eight years, and we are excited to be at the forefront of this new wave.”

Bright Brewers is the craft-focussed division of Renaissance Bioscience Corp., a biological engineering company that develops functional microorganisms for a variety of industries including food and alcoholic beverages. The company primarily develops new strains and licenses them to manufacturers for production and distribution.

Renaissance’s chief executive officer, John Husnik, and chief science officer, Matthew Dahabieh, both earned their PhDs at UBC. Renaissance initially focussed on breeding out undesirable yeast characteristics. Case in point: the prevention of hydrogen sulfide (H2S) production, a trait introduced from a wild wine yeast isolated by Dr. Linda Bisson of the University of California, Davis. Renaissance uses this trait in their brewers’ yeast. Since the development of that core technology, they have turned their attention to breeding desirable characteristics in.

As a result of domestication, many brewing strains have lost the ability to sporulate and sexually reproduce. Multiplication of yeast cells immediately after pitching into the wort is entirely via budding, an asexual form of reproduction. This means their characteristics change very little over time, making it easier to produce a specific beer style consistently. However, selective breeding to alter these characteristics requires sexual reproduction. Some strains can be induced to sporulate by growing them on specific media with low nutrient content or subjecting them to some other sort of stress.

At its heart, the selective breeding process involves inducing an existing yeast strain and a strain with a desirable trait to both produce spores that can then fuse to create a new hybrid. This is done with a hair-width probe attached to a mechanical arm, which a technician manipulates under a microscope. The resulting new strain can then be further refined to produce a variety of different beer styles.

Large numbers of new strains are then put through small-scale fermentations using a standard wort. The resulting beers are analysed by an impressive array of equipment including gas chromatography–mass spectroscopy for volatiles, high-performance liquid chromatography for non-volatile flavour compounds, and ultra performance liquid chromatography for proteins and diacetyl. They are also put through a sensory review panel. Selected strains are scaled up in medium-size equipment familiar to most home brewers. Bright then works with commercial partners to trial their strains in full-size brewery operations.

As an example, Bright’s new Saison yeast had the gene responsible for diastatic activity removed so that it produces that classic fully attenuated dryness without the potential to ferment dextrins (short chain sugar polymers) in can or bottle, which could lead to serious over-carbonation. Furthermore, if this yeast contaminates another used in the brewery, it will not cause over-attenuation in the beers produced.

One trait that will be of special interest to brewery owners is the capacity of certain yeast strains to release additional terpenes and thiols from non-flavoured compounds in hops. That means brewers can use lower amounts for dry hopping and still get the desired level of resinous or herbal flavours from the terpenes and tropical fruit flavour from thiols.

Bright Brewers Yeast now have over 5000 strains stashed away in their culture collection. Through their partners, Angel Yeast, Bright Brewers plan to release eight new products to commercial brewers by the end of the summer, including:

These will come as 500-gram packs of active dry yeast. Bright hopes eventually to supply home brewers, but that will require very different packaging and distribution channels.

With the popularity of the New England strains and the current interest in Kveik strains from Norway, yeasts are really stepping into the brewing spotlight. Bright Brewing’s rapid selective breeding technologies create the potential for entirely new styles of beer. Bright’s scientists would very much welcome brewer input on the characteristics they are looking for in a yeast strain, by email or through their web site, www.brewingbright.com.

Barley has been selected for thousands of years to increase starch content by picking plump grains for replanting. Selective breeding began in the 1950s, leading to the introduction of new high-yielding cereals in what became known as the Green Revolution. Further breeding has improved the processing characteristics of malting barley.

Ale and beer were brewed for 6000 years before the agent responsible for fermentation was identified. In the Middle Ages, brewers skimmed barm off the top of the fermenting wort or collected some of the deposit from the bottom of the fermenter to use for the next brew. Otherwise, since ancient times yeast made its way into a brew simply by blowing in through the air, or sometimes via insects. It sometimes came from grapes added to the brew or was retained in nooks and crannies in the brewing equipment. No wonder the Sumerians prayed to the goddess Ninkasi for success!

Yeast cells were first observed under a primitive microscope in the late 1600s by Dutch scientist Antonie van Leeuwenhoek, but only identified as fungi in 1837 by German researcher Theodor Schwann. Louis Pasteur is remembered for his pasteurization process, but arguably his more important contribution was proving live yeast produces alcohol by anaerobic fermentation.

By the late 1800s, variations among brewers in methods for perpetuating yeast had probably led to wide variations in strains, but only two main variants were known: top-fermenting and bottom-fermenting. The bottom-fermenting strain had gained cold tolerance by hybridizing with an exotic yeast species brought to Europe via early trade routes.

It was always easy to identify the barley ear with the plumpest grains, or the hop bine with the most desirable cones, but only in the last few decades has the technology developed to select, and selectively breed, yeasts. Crops like barley and hops only produce a new generation once a year, so suppliers are tempted to speed up development of new varieties by genetic modification of organisms (GMO). Yeasts can produce a new generation in mere hours, allowing for rapid selective breeding without the need to resort to genetic modification.