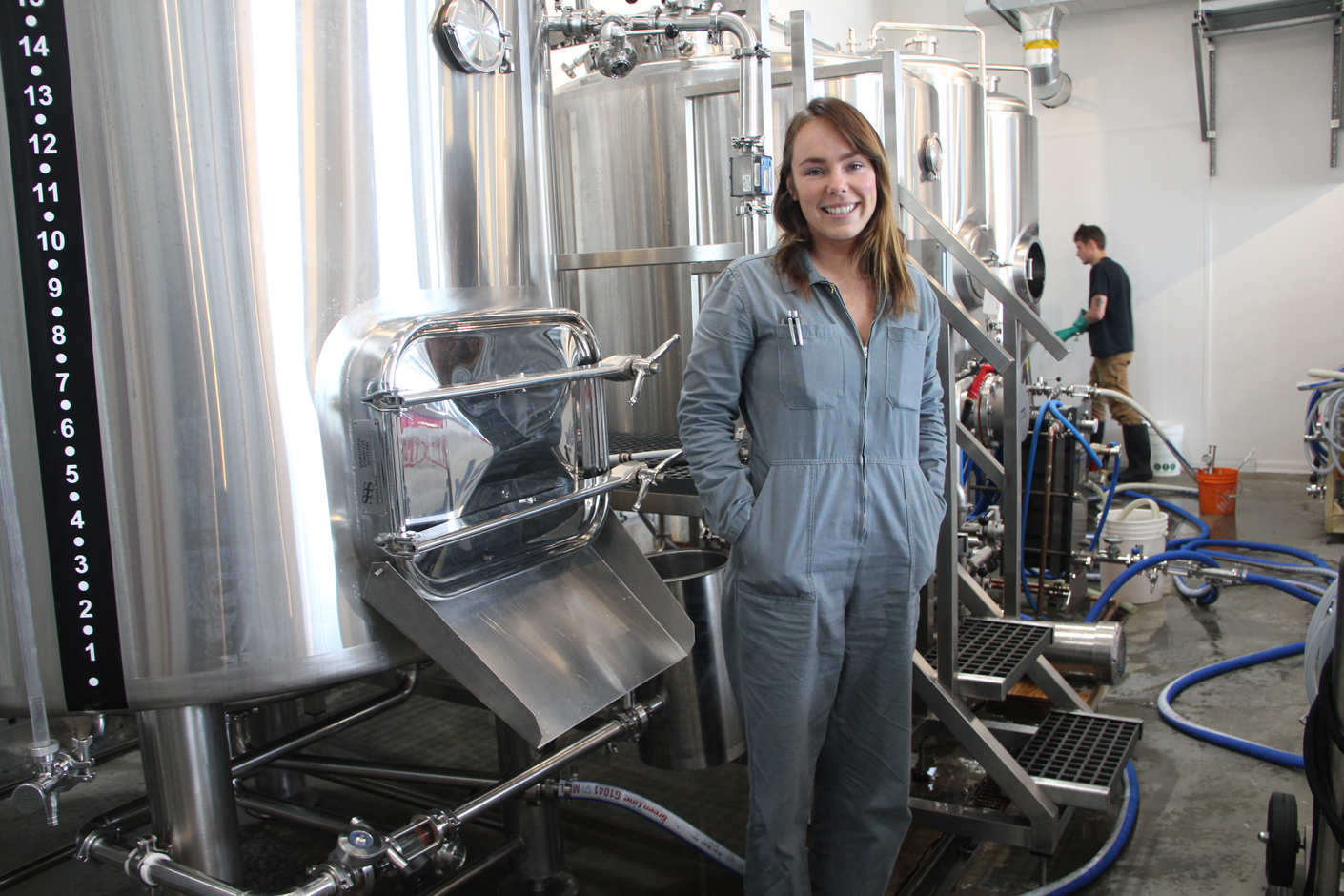 Three years ago, as documented in the Summer 2016 issue of What’s Brewing, I traveled up the Sunshine Coast to Powell River, across to Courtenay in the Comox Valley, and then south to Victoria, stopping at every brewery along my route. Back then, the newly conceived BC Ale Trail was still rolling out, and there was no North Island trail as there is today. Since then, several new breweries have opened in the mid- and North Island, so it was time for a re-visit.

My first stop was newly opened Land & Sea Brewing Company. This 99-seat lounge and brewery in Comox is only a block from the building that housed ill-fated Surgenor Brewing ten years ago. I met up with head brewer Tessa Gabiniewicz to learn more about Land & Sea and the beers they create.

Tessa was introduced to commercial brewing at Nelson Brewing Company, where she worked with brewing veteran Mike Kelly. She moved to Terrace a few years later and helped set up Sherwood Mountain Brewhouse before moving to Comox. She helped Beach Fire Brewing and Nosh House get started and then moved to Vancouver to work with Dave Varga at 33 Acres Brewing Company. Land & Sea’s owner Jason Walker brought Tessa on board in April 2018. The tasting lounge opened in mid-December.

Land & Sea has a 15 hl brewhouse with four unitanks and four serving tanks. Kegs are available for local pubs and restaurants. They have a kitchen with a small menu of interesting dishes including a tuna cobb salad and gluten-free options. Tessa tells me the pickle chip dip is excellent.

I tried five of the beers; the sixth had blown out just before my arrival. Tessa told me that the beers will be always rotating, to keep it interesting.

First up was the Glacier Cream Ale. Brewed with a substantial amount of corn, it has a lovely sweet corn flavour balanced out by Crystal hops. Next, I tried the Spruced-Up Blonde. Floral aroma with a hint of spruce tips; this is not your average blonde. Breakwater Bitter is a northwest-style ESB. Paradise Meadows IPA is a more subdued and balanced version of a northwest IPA at 6% ABV. Snowbird Session Stout is quite sessionable at 3.7%. It is a dry Irish stout, so there is not much sweetness to compete with the roast flavours. Kölsch and Berliner Weisse will be the next to hit the taps. They are planning on one litre cans for off-sales.

New Tradition Brewing is being built at a shopping mall in Comox by homebrewer and contractor Pat Savard and his business partner, Tim Jolley. Pat’s wife will be managing the 100-seat lounge. They are hoping to open their doors in late summer 2019.

They have some interesting ideas to make the room feel like it’s not attached to the Comox Centre Mall including plastered walls, salvaged materials, handmade rustic furniture, concrete tabletops, and textures with sound control in mind. A massive openable window will bring together the patio and inside space. A small kitchen will be serving Aussie meat pies and other items that pair well with beer.

A Kolsch-style beer will be one of their flagships. They are planning an IPA and a raspberry kettle sour for summer. A dark ale will be round out the lineup for opening day.

Ace Brewing Company is setting up shop just off of the main drag in an interesting space in Courtenay. The building is hexagonal, with a central skylight providing natural light to the space. Owners Jo-Anne and Kent Landolt are installing a 20 hl system from Innovative Stainless Solutions. Brewer David Macanulty (formerly of Vancouver’s Yaletown Brewing) will be making the beer. They are hoping to be open summer 2019.

Although Gladstone Brewing was open the last time I was in town, this was my first chance to visit since Tak Guennette took over head brewer duties. The beers have improved under his direction and they have plans to expand. The formerly neighbouring pizza place has moved out, and now that kitchen space houses Gladstone’s own fancy burger bar.

Cumberland Brewing has expanded since my last trip, so I popped by to take a look. Anders Petersson has taken over as head brewer, with Caitlyn Carlisle and Gabrielle Lavoie-Bartlett working the brewery. They took over the space next door, which allowed them to move their walk-in cooler and create more space for the brewery. This also added some seating to the lounge. They have built a larger kitchen and provide local and fresh food options.

They had a solid lineup of options on tap. The Forest Fog unfiltered wheat beer is delicious and accounts for 43% of overall sales. An English bitter and IPA were available for the expats. Red Tape pale ale is made exclusively with malt from Philips and local Vancouver Island hops, making it 95% BC-sourced and at least 75% Island-sourced. Finally IPA is their northwest style IPA, the result of 18 months of experimenting. Dancing Linebacker oatmeal stout is a dry Irish stout: “a big fella but he is light on his feet.” It sells well year-round; some fans drink it through the summer. A barley wine was available for those who felt like a dessert beer after their flight. At six months maturation, it was balanced and not warm. It will age well.

The ‘Beer It Forward’ chalkboard was still going. Patrons can purchase beers for community groups or regulars, and it gets written on the board to be redeemed next time they visit. A good community place for lunch and to read through a copy of What’s Brewing.

Unfortunately, Forbidden Brewing was not open when I was in Courtenay. I hear that they have updated their brewhouse; I would have enjoyed checking it out again.

As I was talking with brewers, I kept hearing about Wayward Distillation House in Courtenay. I dropped by to see what they are up to and I was blown away. Located at 2931 Moray, they are making high quality mead (honey wine) then distilling it to make their premium spirits. Going through 130,000 pounds of honey last year, Wayward projects using up to 200,000 pounds this year. They have Drunken Hive rum with caramelized honey that recently won a gold medal at the Canadian Artisan Spirit Competition.

Unruly Vodka has a bigger body than most vodkas and is very smooth, living up to its gold medal. The Elixir Craft 151 is incredibly smooth and doesn’t burn at all. Unruly Gin has a citrus aroma from local coriander and imported sweet orange peels, juniper, and sarsaparilla for a gold-medal-winning example. A bourbon barrel special release of Unruly Gin is renamed as Char #3. It could be used in place of a whiskey in cocktails. A raspberry-and-ginger infusion uses almost half a pound of local raspberries per bottle. It smells and tastes like fresh raspberries and would be great with sparkling water. Another gold medal winner: Depth Charge, infused with cold-pressed coffee and cacao nibs; it also comes in a barrel-aged version. Krupnik is their gold-medal-winning Polish-style spiced honey liquor, back-sweetened with some honey. Would be nice in a dry apple cider.

Ember Red Ale was on tap during my visit, as was a Berliner Weisse collaboration with Land and Sea. A radler, a nitro stout, and a Buch Blonde (kombucha with blonde ale) are on offer. Every Tuesday is small-batch night, where they experiment with flavours such as Hazelnut Nut Brown Ale, Moscow Mule, Raspberry Blonde, Blueberry Berliner Weisse, and a Strawberry-Basil Berliner Weisse. They plan to have 16-oz. cans available for take-away soon.

Other beverages available include a ginger lime soda, a root beer, a club soda, a nitro cold-brewed coffee, and a kombucha made in-house, along with local cider and wine options.

The food menu board changes twice a day. Items that sell out are wiped off and new items are added for lunch and dinner. Chef Laura Gosnell creates share plates and tapas-style eats made from scratch using local ingredients. The blue-cheese deviled eggs with peppered bacon were easily the best deviled eggs I have ever had.

The furniture for the tasting room was custom-built except for a couple of restaurant seating units that came courtesy of a local restaurant’s renovation. The tabletops are made from the old floor joists from the building renovation and the foot rail on the bar is an old plumbing pipe. Light fixtures from a local school gymnasium help the locals feels comfortable and nostalgic.

Campbell River is lucky to have Beach Fire Brewing and Nosh House, an inviting and comfortable space offering amazing food and delicious beverages.

It’s exciting to know that, next time I am on the North Island, there will be several more breweries to visit. Craft growth across the province doesn’t seem to be slowing down at all. While on your summer travels, follow the BC Ale Trail to explore and find the new breweries popping up. You will arrive thirsty and leave inspired.