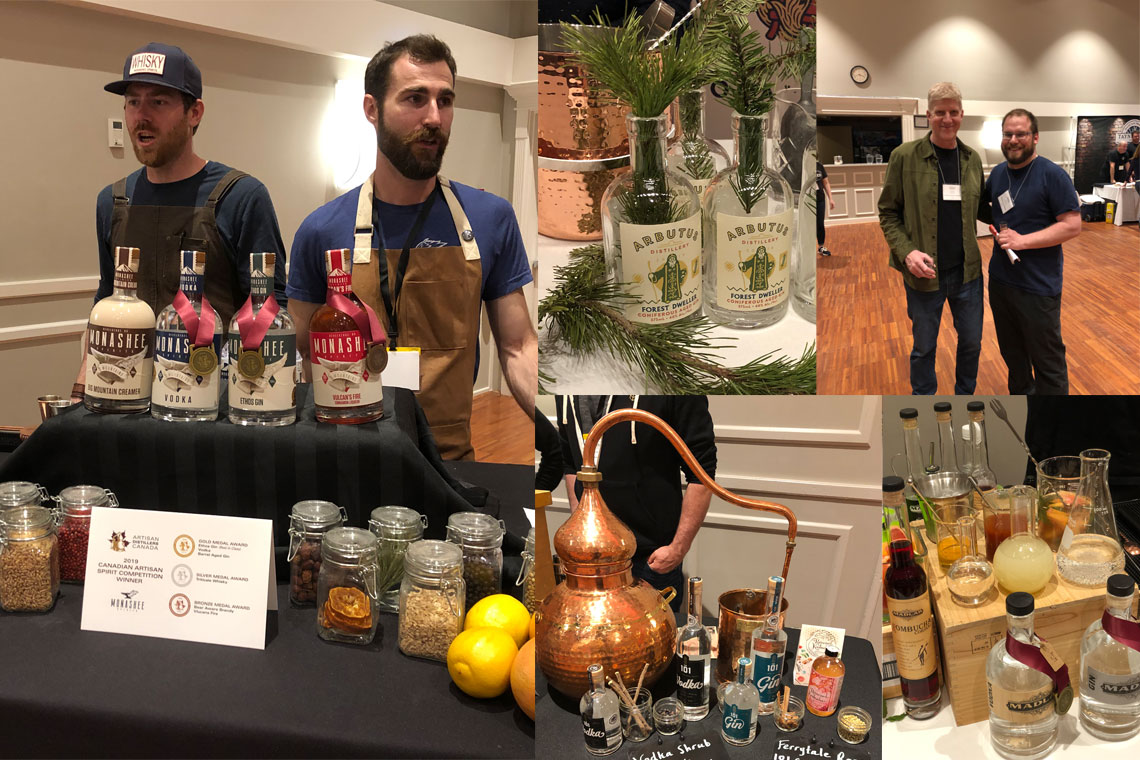 If craft beer in BC is reaching unheard-of success, the same is becoming true of craft distilling. As a result, there is an ever-increasing number of festivals for spirits lovers to choose from. One you should definitely mark on your calendar is the annual BC Distilled, now in its fifth year. It’s been on my wish list for a while, but this year I was lucky enough to attend.

I arrived in time for the trade/media hour along with a couple of serious spirits nerds from Vintage Spirits Liquor Store, where I work. It’s a good idea to have a plan or at least a wish list when attending this kind of festival, as there is just way too much to taste it all. However, pleasant surprises are part of the joy of festivals and BC Distilled has plenty of those. Broadly, I focused on the gins and then on the whiskies, but even that plan proved ambitious.

At a festival focusing on distilling in this province, terroir is an essential component. This expression of place has a definite impact on the gins and the botanicals used in them. As a lover of spruce tip beer, I was delighted to try many gins that incorporated evergreens into their botanical mix: spruce tips, grand fir, cedar and pine. This use of evergreens ranged from the subtle, as in Monashee Spirits’ award-winning Ethos Gin (which includes locally-foraged huckleberries, juniper, and wildflowers along with spruce tips and pine needles) to the dominant, such as Arbutus Distillery’s Forest Dweller (a coniferous aged gin that uses white spruce, grand fir, and pine). Other gins that use evergreens included Tofino’s Old Growth Cedar, Phillip’s Stump and Central City’s Queensborough.

Barrel-aged gins seem to have made strong strides since the last time I tried one. I tasted quite a few, but especially enjoyed the bigger, bolder gins that seemed better able to stand up to the oak and still be recognizably gin, such as Odd Society’s barrel-aged Wallflower, Wayward’s Char #3 and Dubh Glass Distillery’s barrel-aged Noteworthy. Gins are not the only liquor being barrel-aged with great success in BC, as The Woods Spirit Co.’s complex, barrel-aged Amaro testifies.

Further to barrel-aging and great leaps forward: many BC distilleries are approaching the age where their whiskies are ready for the market, so whisky in BC is starting to come into its own. I highly recommend Odd Society’s Prospector, a 100% rye aged in new oak which won audience favorite in the whisky category.

On the subject of great whiskies: I was very excited to meet Central City’s Gary Lohin. We had a nice chat about aging beers and whiskies in which he let slip that he had bottles of 20-year-old Thor’s Hammer stashed away, which is amazing to think about and probably even more amazing to taste. When I confessed that I had never tried his Lohin McKinnon whisky, Gary recommended the Peated Single Malt. I’m usually shy with peated whiskies but this one has that smoky campfire quality that I’m quickly learning to love. “You can taste the potential,” Gary rightly stated.

Festivals are a truly great way to shake hands and interact with the makers that you highly respect. Brennan Colebank of Duncan’s Stillhead Distillery voiced his determination to be patient with his whisky program, which he hopes will be ready sometime in 2020. In the nearer future, his collaboration with industry titan Shawn Soole will be released very shortly (sorry, no spoilers).

Another maker I met was Pacific Rim Distillery’s Luke Erridge, whose enthusiasm for the craft is contagious. He distills with a mind to terroir, which he calls “expression of area.” He might take the gold by using wild yeast that he collected himself in Barkley Sound for his fermentations. I know of no other BC distillery using wild yeast; if that isn’t terroir, I’m not sure what is. Pacific Rim’s vodka uses this wild yeast and a single-malt recipe to make what tasted to me like a very clean white whisky. As a non-vodka drinker, this would be my choice.

After the tasting, I asked my co-workers Nathan and Jamie for their “best in show” choices. Since they had each bought a bottle of Bruinwood Estate Distillery’s Advocaat, the question was pretty much rhetorical. Advocaat is a Dutch egg-based liqueur and Bruinwood, based in Roberts Creek, is the only distillery making one in Canada. “It’s like drinking alcoholic eggnog,” Jamie remarked. It tied for audience favourite liqueur with four-time winner No. 82 Amaretto from Sons of Vancouver Distillery.

Unfortunately, there just wasn’t enough time for my entire wish list. Specifically, I missed out on Shelter Point’s new gin, to which Nathan and Jamie both gave a thumbs-up. If you know Shelter Point’s whisky, you know this distillery doesn’t do anything poorly. De Vine’s Ancient Grains blew me away at another festival recently and is another example of a BC distillery using terroir to great success. Sheringham also has a new Kazuki Gin based on Japanese botanicals. Oh well, I’ll just have to come back next year. Hopefully, I’ll see you there!