skip to Main Content
A VIEW FROM THE CELLAR 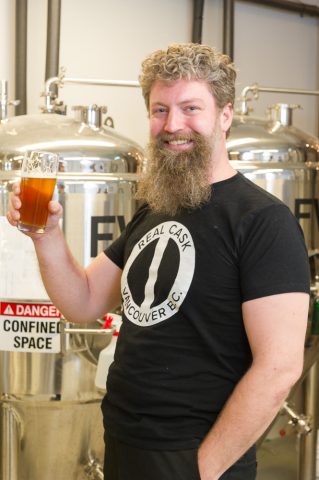 For the last few months I’ve been working part-time at a U-Brew in Burnaby. After 3 years with Real Cask Brewing, I wanted to try something else, and I knew very little about Ferment-On-Premise (FOP) breweries. Some key members of the BC brewing community got their start in U-Brews and fondly recall their time there. As a long-time homebrewer I was also fascinated by the idea of someone doing the messy work for me. I was curious about their clientele, their brewing process and what their recipes were.

I’ve come to learn that these ‘community breweries’ have a loyal customer base who balk at paying ‘over the odds’ in the liquor store—a fair perspective, given the LDB’s ridiculously high markup. Some customers want to tweak their recipes to suit their needs, or make sure that there’s nothing going into their beer that shouldn’t be there.

As you might imagine, recipes vary between businesses. Where I work, there are over 150 recipes from extract lagers to all-grain cloudy NEIPAs. Some folks do still use the green plastic PET bottles that many associate with U-Brews, but many others will happily arrange kegs or cans. Brew shops occupy a shrinking but important niche between homebrewers (beer nerds with too much gear) and the rest of the craft beer buying public.

As the craft beer revolution has exploded over the last 5 years, it has had a mixed effect on U-Brews. The surrounding creativity has inspired them to raise their game and learn new styles, but they have lost overall market share. Couple this with skyrocketing business rents and an aging demographic, and it’s no wonder we’ve seen a few close down recently, with many more on life support.

Recently, Global TV and the Burnaby Now have spotlighted the fact that U-Brews have not benefited from the legislative changes provided to commercial breweries this decade, such as tax breaks, more flexible tasting room rules and other government concessions. They weren’t even invited to the recent industry insider consultation commissioned by BC Attorney General David Eby. It’s true that their model is different in that it operates more as a “grocery store” than a commercial brewery, but their decline shows that there is a need for help from the BC Liquor & Cannabis Regulation Branch (formerly the Liquor Control and Licensing Branch) and the Attorney General, both of whom have point blank refused to discuss the matter. Perhaps they’re a little sidetracked with selling and/or smoking cannabis now that weed and booze have been combined under a single bloated authority.

U-Brew owners are asking for the ability to provide beer samples to prospective customers, so they can “try before they buy”. They’re not asking for a whole tasting room or lounge, but just to share a few ounces of finished product before customers commit to making 45L of beer, cider or wine. I don’t think this is an unreasonable request. However, U-Brews are relatively few in number (only about 20 in BC make beer) and don’t have a lot of power or money, so it’ll be an uphill battle for them.

U-Brews are a unique and interesting part of the BC craft beer culture. If you’ve been curious about getting into your own brewing without all the gear and mess, then I do suggest checking out a U-Brew in your community before they all vanish.

WB columnist Adam Chatburn is a homebrewer, a former cellarman, and a former President of CAMRA Vancouver. He works at Burnaby Brewing Company.