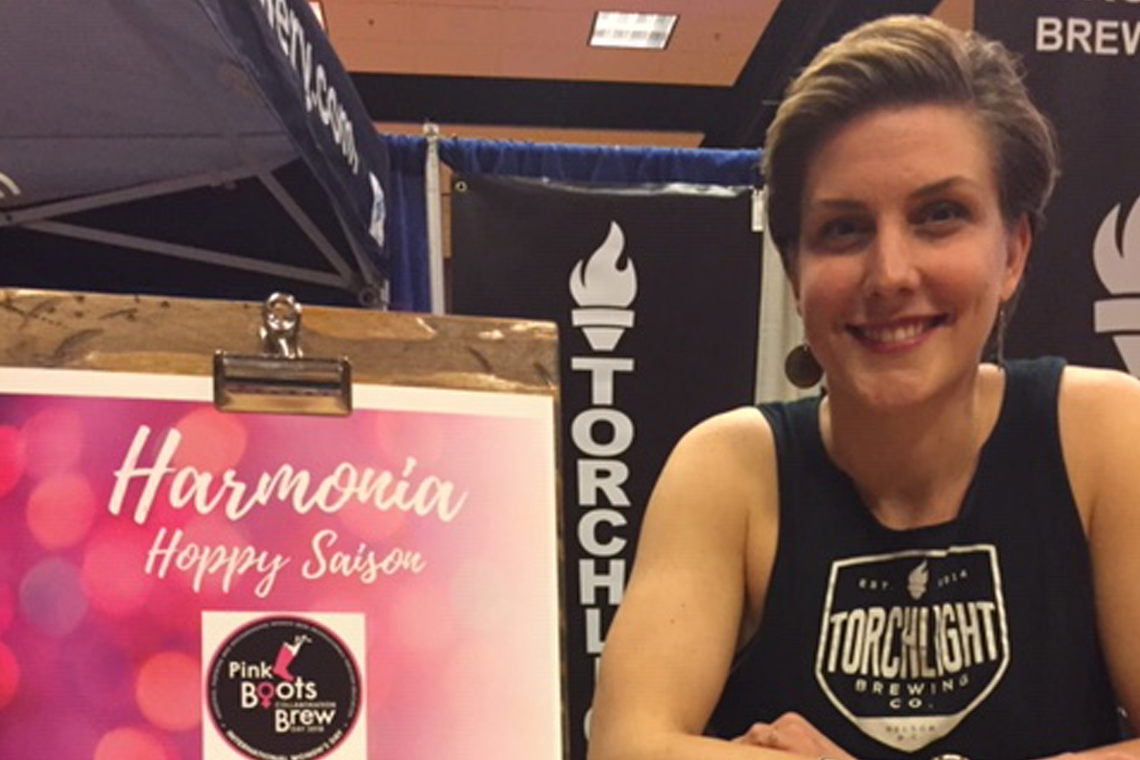 One of my favourite parts of being a chapter leader /coordinator for Pink Boots in BC is meeting the incredible women in the industry. Kerilyn Faulkner is one of these women. I “met” Kerilyn on Facebook just before she joined Pink Boots, as I was trying to find women brewers in BC for the annual Pink Boots Brew that happens on International Women’s Day. We chatted over Messenger in the months before, during and after the brew, and finally got to meet in person at the Fest of Ale and exchanged each other’s Pink Boots Brews! And now it’s time for you to meet her!

About one and a half years.

The same things that helped me discover my passion for beer are what brought me into the industry!

I love beer. The journey here has been fun and unexpected. I was actually bartending at a sweet craft-beer bar in Bracebridge, Ontario, called the Griffin Gastropub. After my first shift, one of the owners opened up the fridge, packed me up 12 different craft beers, and told me to “go do some homework”. That was the night craft beer stole my heart! A few months later there was a competition at Session Muskoka Beer Festival where three people got to create an idea for a beer and actually brew it with Sam from Sawdust City Brewing. I was one of those people. I came up with the idea for a honey-jalapeno hefeweizen, Sam created the recipe, and then he showed me how to brew! That was the day I fell in love with brewing.

WHAT BROUGHT YOU TO THIS SPECIFIC CHOICE? DID YOU CHOOSE THE JOB? OR DID THE JOB CHOOSE YOU?

I definitely chose the job. When I moved to Nelson, Torchlight Brewing was run by the owners, Craig and Josh (who now have a team of 15 or more!). I walked in there, résumé in hand, and Craig told me they were just starting out and weren’t in a position to hire anyone else yet. I offered up a voluntary hand if they ever needed it and continued to frequent the tasting lounge. Eventually they took me up on my offer, and that led into my current position when they expanded from a 4HL system to 20HL. And here we are.

WHAT WERE YOU DOING BEFORE?

I studied automotive tech and business and worked as an automotive apprentice and service advisor, but I always had a side job bartending, which eventually led me to realize that I enjoyed beer much more than I did cars. I quit my job, spent a few years travelling on and off, and moved to Bracebridge from my hometown Toronto, and really discovered my love for craft beer there. After a trip to Australia, I managed to find myself in Nelson, BC and joined a homebrew club which landed me a great job at Art of Brewing (a homebrew store) and then to an opportunity to work with Torchlight, who were in the middle of a big expansion.

Absolutely. I got to know Craig and Josh well before I started at Torchlight, so I knew the type of people and environment I would be working in. I spend more time with my brewery family than my real family and there is no way I could do that if I wasn’t respected. Customers, beer festival goers, and other industry people have, for the most part, responded to me being a brewer with nothing more than some questions, good conversation, and a “Cheers.”

HOW DO YOU FEEL ABOUT WOMEN-ONLY BEER GROUPS LIKE PINK BOOTS? WHY DID YOU JOIN? 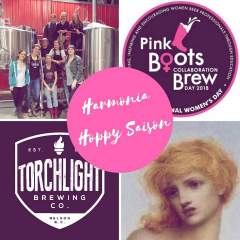 Pink Boots Society is a great organization and so are others such as Barley’s Angels and The Society of Beer Drinking Ladies. They foster creativity, collaboration, teamwork, and an opportunity to connect with similar people. I joined Pink Boots for a few reasons. One was to be a part of the annual Collaboration Brew Day and get a group of women together who were (mostly) strangers. Most hilarious and fun brew day yet! Another reason is the support they give to members through scholarships and training. It’s a great community and network of skilled talented people.

I am still in training and will always be! My journey has been very hands-on. I have mentors who are guiding me along the way. I’ve completed my General Certificate in Brewing from the Institute of Brewing & Distilling [London, UK] and plan to begin studies at Siebel Institute as well.

My favourite Torchlight beer is whatever our newest creation is! We’re always coming up with new ideas and recipes to keep our minds and taste buds excited. We do a series of small batch exclusives called Tap 13 beers, so you can catch me drinking those when we’ve got them, too.

Hardest question ever! But I had Framblanc from Cascade Brewing in Portland, that a friend gifted me, and it blew me away. So it’s my favourite. For now.

There are so many great ladies, but Kristin MacDonald at Muskoka Brewery in Ontario is a friend and brewing industry inspiration to me. She is the queen of accomplishing goals.

All of my smaller achievements accumulated, and I made it to where I am right now and enjoyed the whole journey. I’d say that’s pretty good.