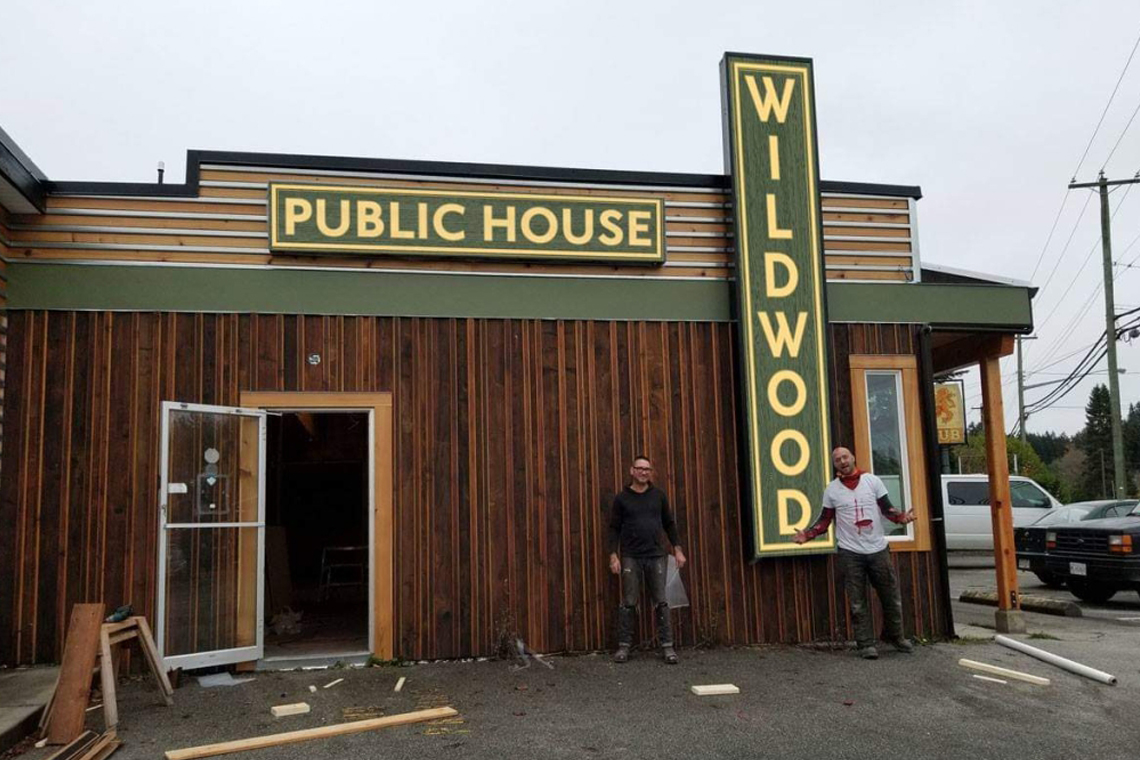 Above picture: The new pub under construction

Reports that Powell River is about to be the home of a new brewpub may be premature, but there is no doubt that the picturesque coastal city will soon have an exciting new craft beer-focused pub for locals and beers tourists alike to enjoy.

The Wildwood Public House, previously known as the Red Lion, purported to be Powell River’s first neighbourhood pub, is weeks away from opening. It will focus on Sunshine Coast and mid-Island craft beers, Neapolitan pizza, and live music once the doors are open.

There is a lot of buzz about the Wildwood, locally and in craft beer circles. Much of it has to do with the new ownership group, which includes music legend John Wright, who co-founded the iconic punk rock band NoMeansNo with his brother Rob, and Isaac Tremblay, co-founder and current director of Quebec craft brewery Le Trou du Diable.

“Our plan is to renovate and bring this old pub into the twenty-first century—kicking and screaming at times, but we’re getting there,” reports Wright.  “We want to focus on craft beer and cider and are installing a big-ass Italian pizza oven for Neapolitan pizza.”

The pub will have 12 taps to start, with a mix of craft beer and cider, and one kombucha tap to wash down the pizza. The menu will feature pub favourites and locally inspired entrees. Live music is also in the plans—no surprise, given Wright’s 30-year history in the music industry.

They have improved the stage and plan to establish a comfortable schedule that will have broad appeal, and a range of events that both respects and entertains the neighbours.

“I want to focus on what I consider regional beers—Sunshine Coast and Mid-Island breweries—but I have good friends all over in this business, and 12 taps is already not enough,” says Wright. “However, our main goal is to have a good range of styles and choice without being too overwhelming.”

Reports over the past year in The Growler and Vancouver Courier listed the Wildwood as one of BC’s most anticipated new breweries in 2018. But the brewpub aspect of the business plan is still not etched in stone; it depends on the success of the pub, so the establishment of Powell River’s first brewpub is still not certain.

If this stage proves successful, the owners plan to approach the neighbourhood, city, and government about installing a 10-barrel microbrewery and make the Wildwood a real brewpub.

Wright has been an avid homebrewer for decades, and teamed up with Tremblay and LTDD to brew PunkRauch, a Bavarian-style smoked lager, based on Wright’s home-brew recipe.

“I am a lager beer man and, if the brewery comes to be, that will be my focus.”

In keeping with the history of trail-blazing in Powell River, the Wildwood will be Powell River’s first craft beer–focused pub. It will give the city another venue for live music and give its neighbourhood of Wildwood a much-needed social focal point.

“Although we are still licensed as liquor primary, with the new family-friendly endorsement, we can allow kids in, when accompanied by their parents or guardian, for something to eat,” states Wright.  “We want to feel comfortable for anyone, including parents, and will strive to be an inclusive neighbourhood pub and social gathering point for Wildwood and beyond, be it for a meal or a good beer with friends, or hopefully both. “

“We live in one of the most beautiful parts of the world, and what goes better with beauty than great food, beer, art, music, friends and family? It is where we start and end.”

The Wildwood Public House, located at 5987 Lund St, Powell River, is slated to open in early 2019. It will be a must-visit place for local and visiting craft beer lovers and a much-needed addition to the local craft beer scene.