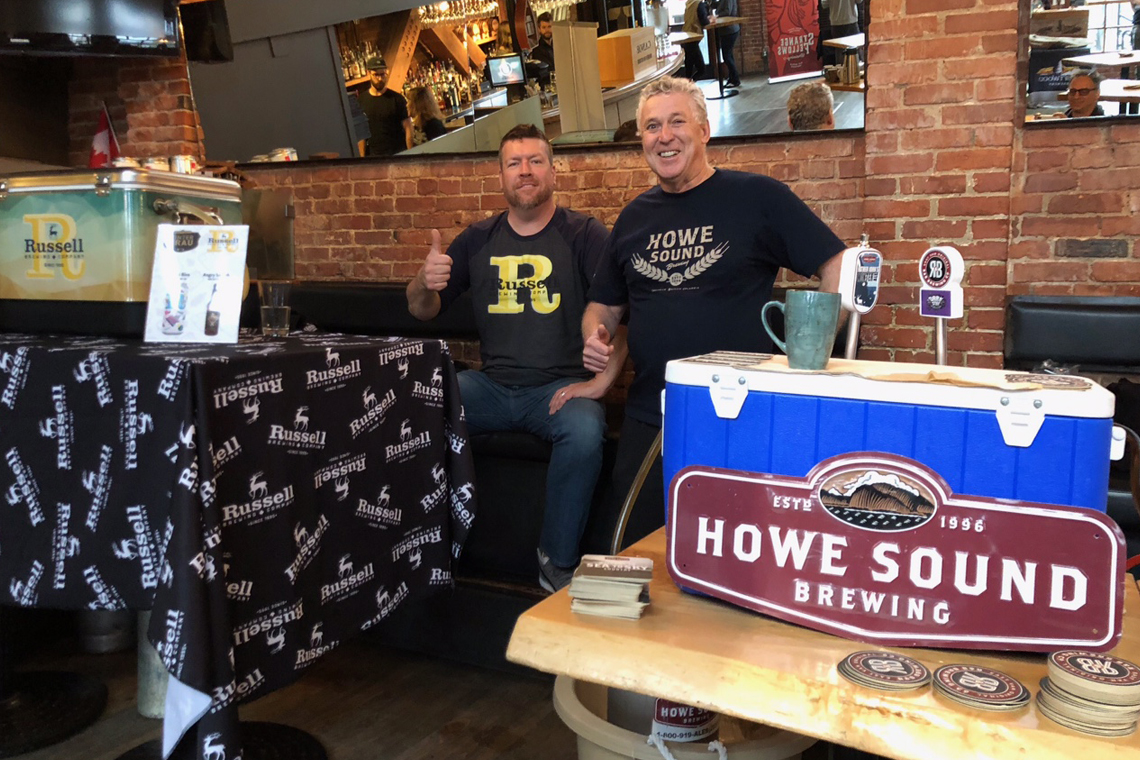 Out and About with Scottie

Above picture: At Winterbrau with Russell Brewing

Our editor wanted a bit on Imperial Stouts. “Imperial” in the name of a beer means the beer was shipped to the Imperial Court of Russia through the Baltic, usually from England. These beers had to have a lot of malt, be of high specific gravity to impress the court, and have a hop content high enough fight off infection in the barrels on long sea voyages. Imperial beers have big taste and a big kick. They enlivened court activities and events.

I always tried Imperial Stouts on travels. I fondly remember ducking into little British pubs on blustery winter days and warming up to a strong black ale, cask conditioned and hand-pulled. They were very common in the 80s and 90s in the UK and USA and have a significant market share to this day. These beers can also be cellared with great success.

Three good ones, that I’ve savoured on a number of occasions:

Be prepared to be dazzled by the malt experience of these black beers.

Thanks to everyone who comes and says hello wherever I go and thanks all of us at What’s Brewing for our efforts.

… and now to events:

This industrial heritage railway architecture building dates back to 1912. The unheated facility featured 27 presenters of beer, cider, and a fresh hopped Kombucha. The day was sunny and bright and two food trucks, Grilled to the Mac and Indecent Risotto, served up tasty food.

Attendees mingled with brewers and reps and it was a casual atmosphere, with people discussing taste and flavours and exchanging stories. This event attracts a beer-educated crowd. Attendees looking for dramatic fresh hop taste got a show-and-tell on the subject, featuring a wide variety of fresh hops in the beers.

Judging by the crowd, people were extremely happy with the day’s event. For me, the risotto with chipotle was a million miles away from the usual beer fest food. Great food and ales together? That’s Beer Nirvana. Good job by the Victoria Beer Week organizers in making a fun and memorable sunny day in a historic building with a collection of fine beers. 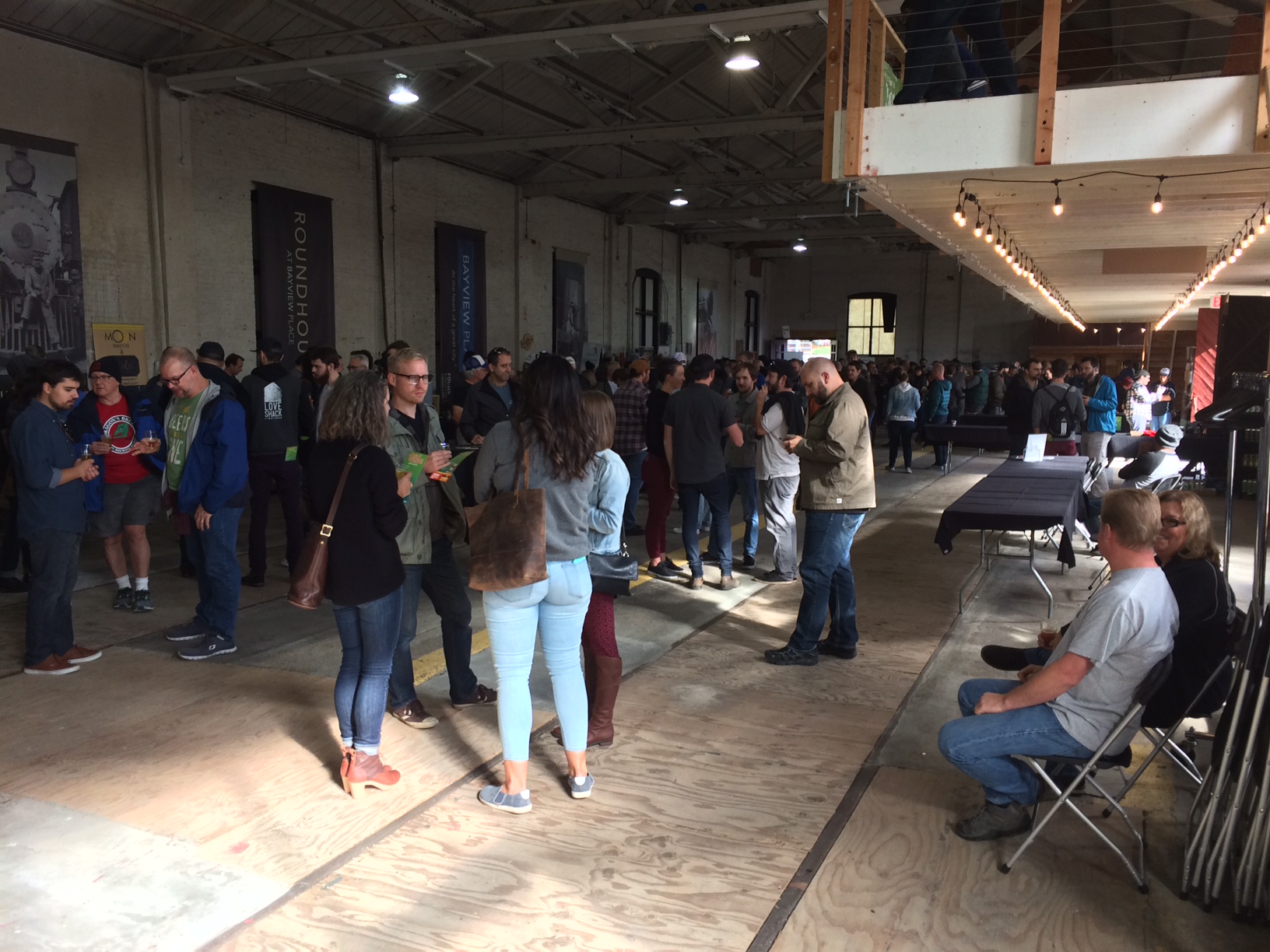 Located in the Historic City Lights building. Constructed in 1894, this brick and beam structure is one of the finest examples of old to new use as a brew pub that I’ve seen on all my travels.

This event is so popular with breweries that Canoe team leader and brewer Daniel Murphy had to do a lottery to choose breweries this year. As always, patrons filled the building to capacity to enjoy some of the finest craft winter beers available.

Canoe is also known for its gastro food choices and servers circulated with trays of snacks for guests to enjoy along with the beer. Local musical group Bučan Bučan has played the event for the last number of years and it’s a very entertaining show, leaning toward Eastern European Gypsy music, full of brass, drums, vocals. Superb.

As always, a salute to the Canoe team for the warm hospitality and top of the line service. 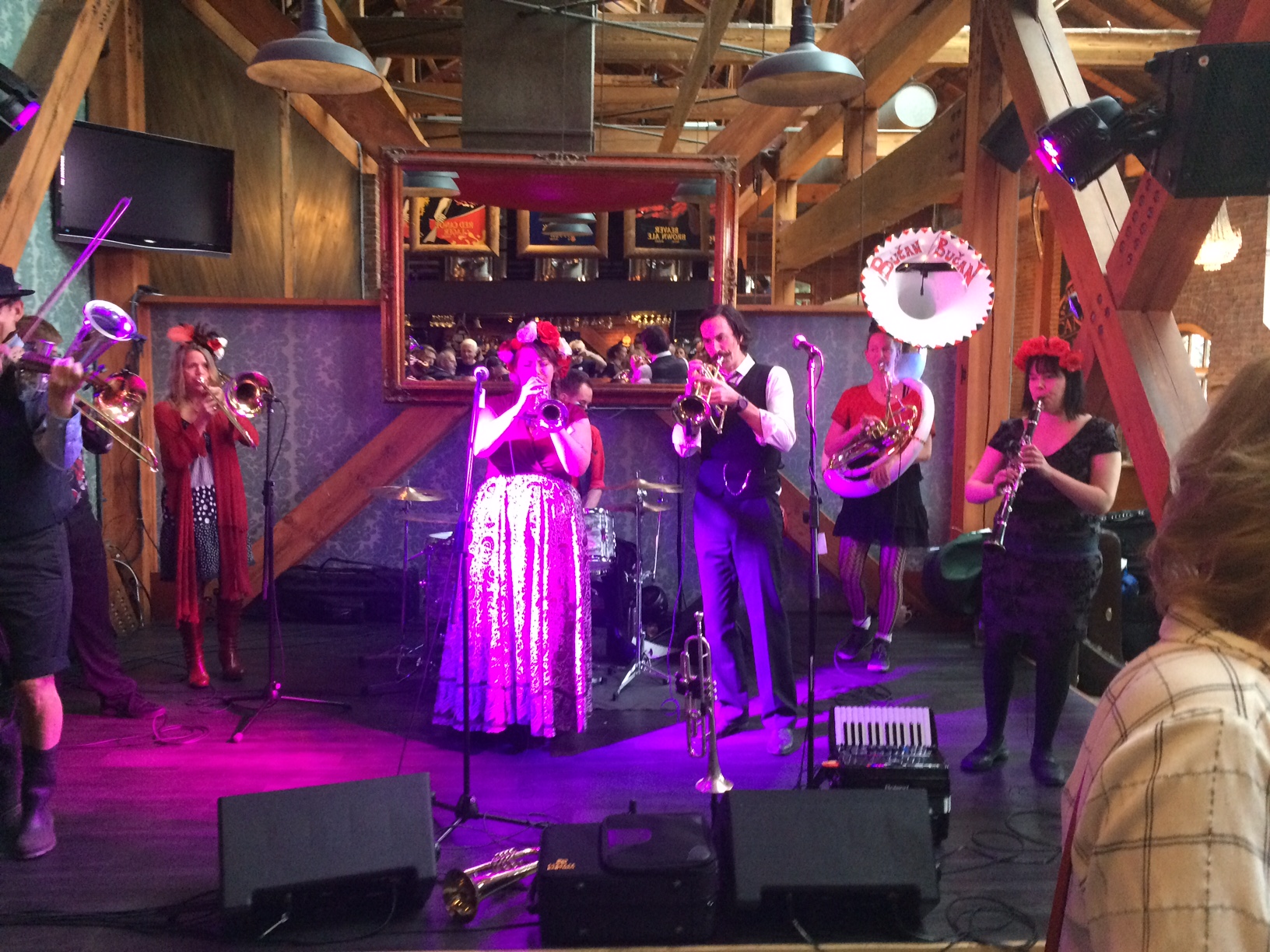