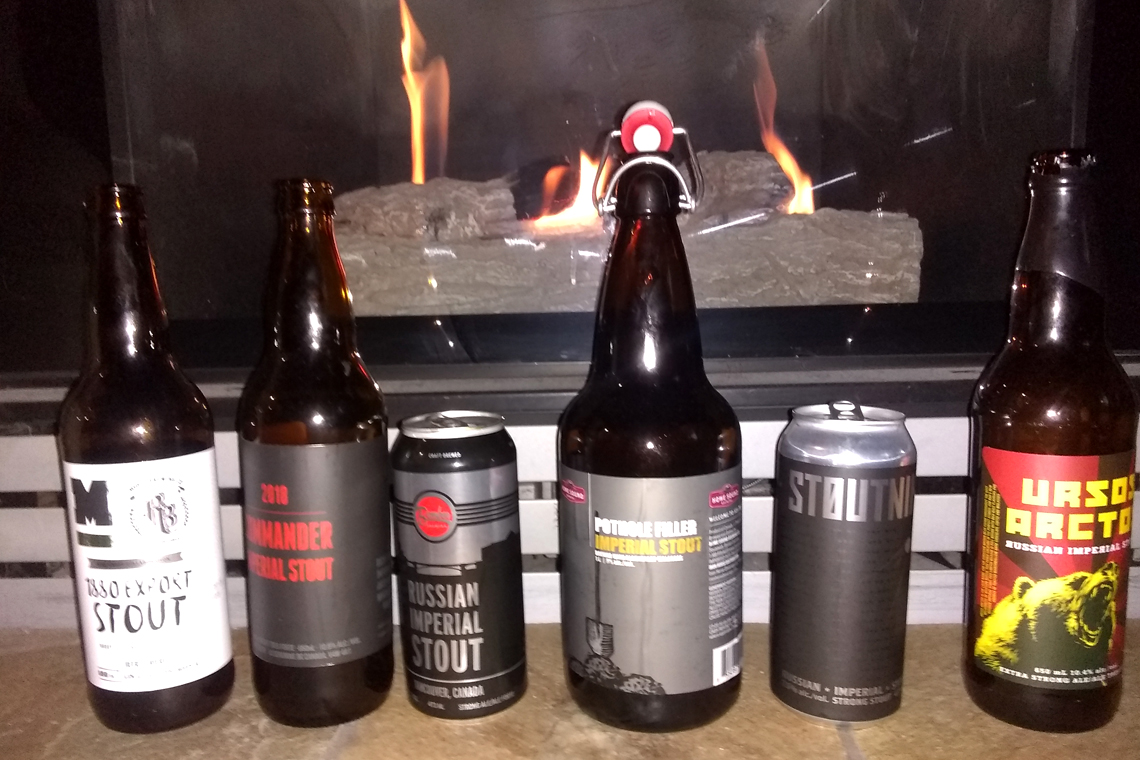 Imperial stout, also knowns as Russian Imperial Stout or RIS, is a strong dark beer originally brewed in the eighteenth century in London for export to the Russian court of Catherine the Great (Empress Catherine II). The beer was brewed extra strong to withstand the long journey to Russia. Sound familiar? (think IPA and India). Like many styles, its popularity waned once lagers were introduced. But with the craft resurgence in the 1980s, homebrewers and craft brewers alike began producing imperial stouts again.

Even though the style originated in England, the BJCP guidelines place imperial stout in category 20, American Porter and Stout. Imperial Stout is category 20C. The guidelines indicate that this style of beer should have an original gravity between 1.075 and 1.115, with a final gravity of 1.018 to 1.030. This will result in a stout with somewhere between 8% and 12% ABV, a strong beer.

Imperial stouts are intensely-flavoured big beers with deep, dark colour. Roasted malt flavours of coffee and cocoa are prominent, with dried fruit underlying. The finish should not be overly sweet, so full attenuation is important. A hop balance is important as well. A warm alcohol feel is all right, but it shouldn’t be hot. This style could be described as a black barleywine.

Nineteen years ago, I brewed my first Imperial stout. It wasn’t an award winner, but I learned a lot from making it. Here is a recipe that will give a much better result. This recipe is for approximately 20 litres of finished beer at 10% ABV. I include the grain bill percentages, so you can adjust for a different sized batch.

I would treat my mash water with 10 grams of chalk, 5 grams of baking soda, 5 grams of calcium chloride, and 3 grams of gypsum. I would likely add 6 mL of 88% lactic acid to the mash as well, to ensure mash pH is in the proper zone. The idea of these minerals is to try and mimic the brewing water in London for an authentic Russian Imperial Stout. But we have amazing brewing water in most of BC, so you could skip the water treatment and still have a fantastic beer.

Boil for 60 to 90 minutes depending on your pre-boil gravity.

The original gravity should end up around 1.094. Pitch with two packets of Safale S-04, or your favourite English ale yeast. You will need to make a starter or use two packages to ensure a proper pitch rate. Ferment at 18 to 19 degrees C until the gravity reading is the same for three days or more.

Beers like this with high alcohol by volume tend to improve with age, so consider putting at least half of the batch in the cellar. Dip the necks in melted wax and your Christmas gifts are ready to be handed out.