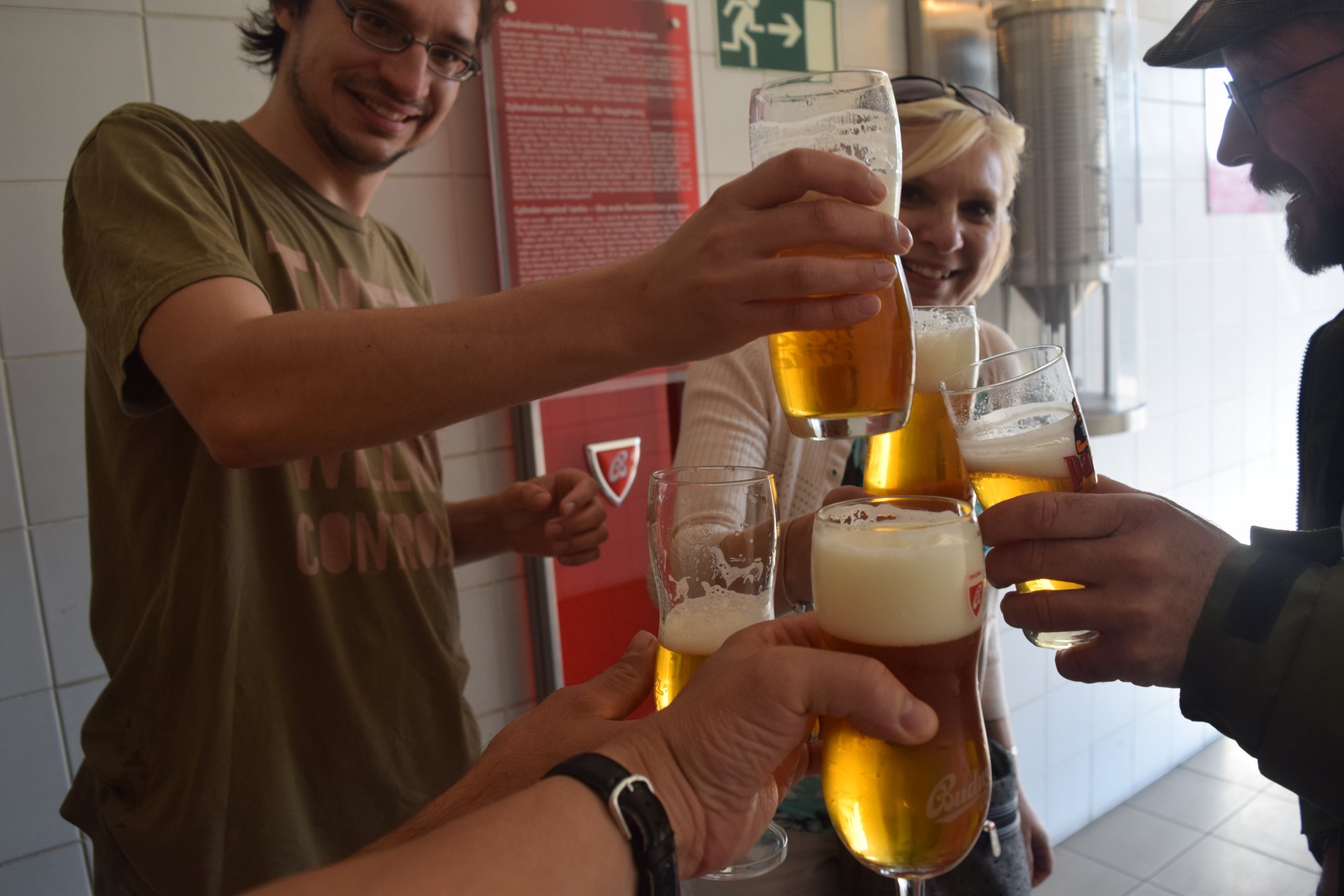 How do you define a craft brewery? For some, it’s ethos. Here’s the story of how perhaps the world’s most famous name in massive, corporate beer also belongs to what might be one of Europe’s best and largest guardians of the craft ethos.

Most of the original history of what we tend to think of as beer is European, and one of Europe’s great brewing nations is now called the Czech Republic (or Czechia if you like). In the CR, many of the greatest historic breweries are not in the capital city of Prague, but in smaller towns that you can reach by rail. One of those we just visited is České Budějovice, a town that the Germans know as Budweis.

Long ago, the Germans nicknamed the really good beer from this town as ‘Budweiser’ (in the same way we have Pilsener, Dortmunder, and for that matter, Hamburger and Frankfurter–basically everything you need for a picnic and baseball game). The name made its way into the lexicon of a certain American brewing tycoon who incorporated it into his massively expanding 19th century branding plans, and soon the world outside Central Europe knew the name. They just didn’t know the original Czech beer.

There’s only one beer named Budweiser sold in the CR, and in Germany. What has for many years been Deutschland’s #1 import beer was, at a point in the late 19th century, debatably a German product simply being made in a neighbouring territory, thanks to the very large proportion of ethnically German residents and brewery management in Budweis at the time.

Through force of will, the Bohemian (ie, Czech) population in Budweis eventually established their own “Czech Joint Stock Brewery” to compete with the previously German-dominated one, and it came to be a nationally-owned company known as Budějovický Budvar, národní podni, or in English, “Budweiser Budvar, National Corporation” (the ‘German version’ still exists as “Budweiser Bier Bürgerbräu”, brewed in Budweis by Pivovar Samson, an AB InBev company).

Budvar is a made-up name, with the last half taken from ‘pivovar’, the Czech word for ‘brewery’ (the Czechs talk about ‘cooking’ beer; pivo = ‘beer’ and vařit = “to cook”). Thanks to state ownership, they don’t report to any international beverage conglomerate; in other words, despite being the #2 exported Czech beer, they’re not ‘macro’.

CAN A STATE BREWERY BE ‘CRAFT’?

Budvar’s beer sommelier Aleš Dvořák is no piker; he has been a brewer there since 30 years ago, judges at the World Beer Cup, and is the author of Budvar’s award-winning dark lager recipe. One of his many friends in the international scene once made a comment that Budvar, despite its size and ownership, was really an independent craft brewery, and therefore the biggest craft brewery he knew.

We can tell you that after the considerable amount of time we spent at the brewery one afternoon, we left more than convinced that (no doubt due to the security of state ownership) what Aleš and others are doing falls into the same category of “care for craft over commerce” that we use to delineate macro mentality from micro.

Start with the fact that they refuse to age their flagship lager any less than 90 days. There are macro breweries smaller than Budvar that ship “lager” to market when it’s barely aged enough to earn the name.

Also, a factor is how their 19th-century founders turned down other potential locations in order to build a large brewery above a well with the most outstanding local water they could find. That’s a recurring theme in Czech brewing. The world beer scene is dominated by products originally created in Pilsen and Budweis because of nothing but the stuff macro marketers brag about: they used brilliant natural ingredients and aged their beer, and unlike many macros, Budvar manages to keep doing that.

But the most sublime proof of the passion and reverence Aleš (what a name for a brewer who makes lager) had for their craft came when he took us down into the brewery’s bowels for a little quality time with their giant horizontal aging tanks. The nectar Aleš pulled out of four tanks for us left anything else we experienced during this trip in the centuries-old dust.

You may have heard of a similar public tour opportunity at Pilsner Urquell, which we indeed experienced, and it wasn’t bad. We also did the general public tour at Budvar, with cellar samples. But then we trudged with Aleš through hoses and puddles to get to where the herd cannot go, and as far as we’re concerned it made our trip. The look of delight on Aleš’ face when he saw our genuine pleasure drawing the soft, creamy liquid onto our palate told us the feeling was mutual.

But don’t just take it from us. The European Union has the same warm fuzzy feeling for Budvar’s authenticity, based on the fact that it is a local heritage product created (unlike many well-known “import” brands) only in the place from which it hails. As such, Budvar has been granted “Protected Geographical Indication” status, the same type of accreditation afforded to Champagne wine.

Many thanks to brewer Aleš Dvořák and PR Manager Dr. Petr Samec, who was also generous with his time and a nifty gift: the brewery’s well-produced hardcover book chronicling the heartwarming “Czech people’s brewery” founding story.

If all this gets you thirsty to try Budweiser Budvar here in Canada, then you need to know that due to an 80-year-old legal resolution with Anheuser Busch, Budvar is known as Czechvar here. And no, after travelling halfway around the world, the bottled product will not match the “milk from the cow” experience we had with Aleš. But every Czechvar you drink is a vote for a Budweiser a craft lover can stand behind.