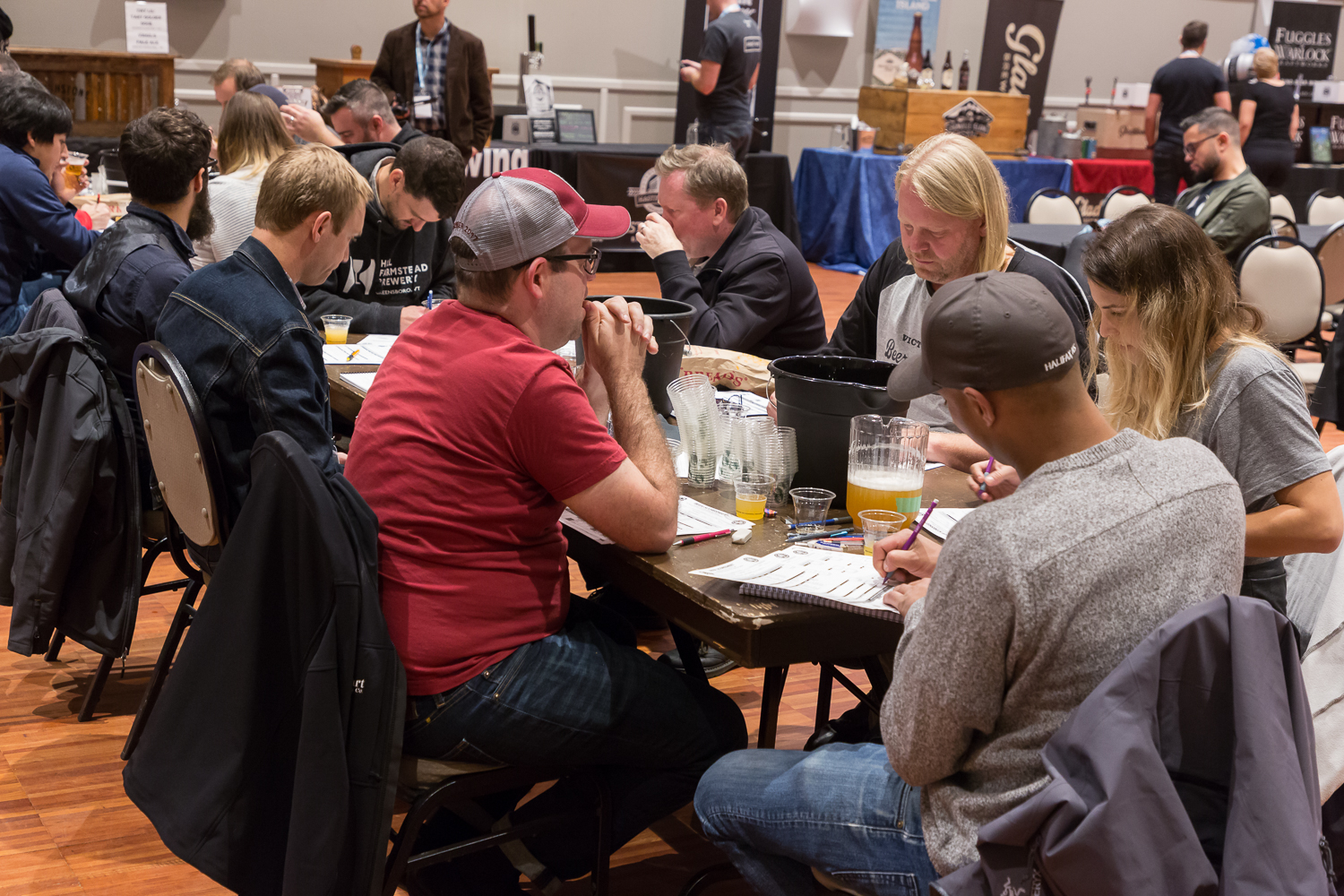 Above: Beer judges at work before the 2017 BC Beer Awards. Photo: Brian K. Smith

Here on the West Coast of Canada, we look for two big beer awards events each year. The Canadian Brewing Awards happens each May, and the BC Beer Awards take place in October (this Saturday the 20th, at the Croatian Cultural Centre in Vancouver). Buzz is ramping up for #BCBA2018 this weekend.

Watch a brewer that just won an award and you’ll see nothing but happiness and excitement. Those honours can make difference between living hand-to-mouth and growing one’s brand exponentially. But not everybody shares their joy. That gets me thinking: it’s time I addressed the elephant in the room when it comes to awards events.

Why is it that beer geeks have a love/hate relationship with judging contests? The trophies haven’t even been handed out before you hear the comments: “How did that beer win? So and so’s beer is way better than that one. What are the judges thinking?”

Back in 2016, the Canadian Brewing Awards was held in Richmond, and this year the event came up in a few conversations for me. The number of macro-owned breweries that took home hardware that year seemed to have soured many. Unfortunately, the commotion over that flaw prevented many from noticing the 2017 CBAC announcement that only 100% Canadian-owned breweries would be able to participate going forward.

A typical Western gripe with CBAC: their events are more often than not held back East, which implies that they don’t represent us. But this concern is easily dispelled by considering the consistent volume of winners coming from BC.

Another contentious issue for some is the use of BJCP (Beer Judge Certification Program) guidelines as a judging rubric. The refrain “Going by BJCP is dumb” is all too common from some beer geeks. Many would prefer to see awards going to the “best” beers in a category, not the ones that best conform to the predefined BJCP style.

The challenge is that awards based on personal preference are subjective. By using preset style rules that are clearly available to everyone, judges can work objectively. It’s up to brewers to ensure that their submission matches guidelines for the style chosen, and that it‘s a good beer overall, compared to similarly styled beers.

Are the BJCP Guidelines perfect? Of course not. The BJCP can be slow to react to new styles. Case in point: the recent recognition of New England IPAs long after their addition to the Brewer’s Association guidelines. That delay was to ensure consensus on judging expectations, so a Double Dry-Hopped Double Milkshake IPA with three different tropical fruits isn’t being judged inappropriately against a true-to-style hazy IPA.

If you look at judging guidelines like building codes and brewers like architects, it all plays well together. Brewing is an art, but there is a structure that can be adhered to while still designing amazingly intricate beers that blow people away, and also happen to win awards. The alternative—basing awards solely on personal preference—works well at certain events, but the judges will tend to have a different focus on the beer. In the end, they’ll make decisions that might not match with the general public.

One much decide whether to go with a group of beer aficionados using purely personal taste, or tell those people they need to look for specific qualities and mark based on how well those qualities are represented in each beer.

This argument will likely continue ad nauseum.  At the end of the day, these awards were never developed in the interest of influencers, bloggers, and beer geeks. These awards are in place to celebrate good brewers following good brewing practices, meeting established guidelines that are known, understood, and attainable.

So the next time a brewing awards event rolls around, put down the pitchfork, pick up a pint, and toast the care that good brewers and beer judges show in order to help make craft beer better for everyone.

Matt Poirier is a homebrewer, beer reviewer, and the craft beer columnist
for Monday Magazine in Victoria. Read more of his
thoughts at matterofbeer.com.